Companies Can Be Irrational Too

Assistant professor of marketing Avner Strulov-Shlain describes how his research can change the way we think about companies’ decisions.

It took a decades-long shift for the field of economics to accept behavioral science and its insistence on viewing economic agents as real people who often make irrational or biased choices. Now, assistant professor of marketing Avner Strulov-Shlain is trying to similarly shift our perspective on how we think about the choices companies make.

“When marketers and economists think about what companies are doing, we should think about actual companies, and try to describe their real behavior, rather than assume that they’re always optimizing, hyper-rational, and sophisticated,” explains the behavioral economist. But Strulov-Shlain’s study of firms suggests that, just like individuals, companies can make persistent mistakes, even when they have information on consumer bias and psychology right there in front of them.

It’s a topic he’s focusing on as a researcher at Booth. For example, Strulov-Shlain studies the “left-digit bias”: the idea that customers feel there is a big difference between, say, $4.99 and $5, and that demand drops when prices cross that round-number line.

Recently, Strulov-Shlain has been studying how a policy change has affected the decisions of Israeli supermarkets. By 2008, Israel abolished the 1-cent and 5-cent coins, making the 10-cent coin the smallest denomination available to consumers. In response to consumer frustration at still seeing prices such as $4.99, the government told companies in 2013 that they had to price to the dime. 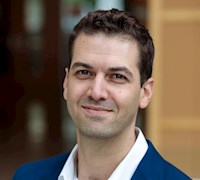 “At Booth, there’s this idea that there are many different interesting questions, and as long as the way you study them is sound and scientifically correct, then we benefit from having a diversity of opinions, perspectives, and methodologies.”

The logical response to this reform, if companies were optimizing and being rational, would be to implement prices that ended in 90—such as $4.90—and more importantly, to keep avoiding round prices, thus still taking advantage of the left-digit bias. But instead, on the day of the reform, 20 percent of supermarket prices ended in 00—only to have that be phased out as chains realized it was unappealing to consumers.

“What this shows,” says Strulov-Shlain, “is that while it seems like in the long run before the reform, or a few years after the reform, as though these companies understand what’s going on and what they should be doing, this is not the case. Right after the reform, it seems as if they, like people, also have a heuristic and rule of thumb where they have been using the 99-ending price but don’t understand why it’s important to do so.” And because of that lack of understanding, they wasted months on a mistake, rather than optimizing their opportunities.

Professor Strulov-Shlain has utilized Nielsen data housed at the James M. Kilts Center at Chicago Booth to look into the left-digit bias in the United States, and he has been able to leverage the center to connect to Booth alumni in marketing, tapping real business executives to be a sounding board for his ideas and data. “I can talk to people and see how they think, and not be detached from the real world, only looking at my numbers,” said Strulov-Shlain. This rich intellectual community and its emphasis on diversity of opinion is what has most appealed to Strulov-Shlain about being a researcher and a professor at Booth.

“I think I was hired here because my research is different than that of my colleagues,” says Strulov-Shlain, who values the ability to discuss his work with other Booth faculty, who may have very different perspectives. “That’s not true everywhere. At Booth, there’s this idea that there are many different interesting questions, and as long as the way you study them is sound and scientifically correct, then we benefit from having a diversity of opinions, perspectives, and methodologies.”