The University of Chicago Booth School of Business created the first Executive MBA program in the world in 1943, a step that strengthened American business in the wake of World War II.

It was the first program of its kind and a model other schools would eventually emulate.

In 2018, as Chicago Booth marks the 75th anniversary of its Executive MBA class, the university is looking back at the program that inspired a new approach to business education for working executives.

“The Executive MBA program at Booth accelerated the value of the MBA,” said Harry L. Davis, Chicago Booth Distinguished Service Professor of Creative Management and a key figure in expanding Booth’s Executive MBA program internationally. “It fast-forwarded the study of business to a larger audience, particularly to a more senior audience, who were able to use the techniques in more serious managerial leadership roles.”

For more than 20 years, the Executive MBA program at Chicago Booth, then called the Graduate School of Business, was the only business graduate degree program tailored to midcareer professionals. Today, there are 300 Executive MBA programs in nearly 40 countries, and Booth continues to remain unrivaled for its intellectual rigor and analytical skills.

The 52 students comprising the world’s first Executive MBA class met two nights per week in downtown Chicago. Many of the students came from iconic Chicago companies such as Marshall Field’s, Commonwealth Edison, Illinois Bell Telephone, Walgreen Co., Chicago Tribune, and Spiegel. Some worked at local manufacturing companies that made gears, freight cars, conveyor belts and machinery. They were accountants, plant supervisors, engineers, production managers, purchasing agents and even one librarian.

In the early years, students were typically in their 40s or early 50s, with decades of work experience but little formal business education. They attended classes taught by the same faculty as students in the Full-Time MBA Program, unusual for part-time programs of that era.

Today, Booth’s Executive MBA program enrolls 230 students from more than 46 countries. Classes take place across three campuses in Chicago, London and Hong Kong. The students are an average age of 37 and have an average 13 years of work experience.

When Booth began offering MBA classes in Barcelona in the 1990s, students took classes from the same world-renowned Booth faculty who taught in the full-time program. This practice continues to this day at permanent campuses in London, where Booth relocated in 2005, and in Hong Kong, where Booth has operated since 2014.

While the world today looks very different than it did in 1943, one constant remains: the need for leaders who have the skills, educational framework, and confidence to adapt to change.

“Booth continues to be the only U.S. institution with permanent campuses on three continents,” said Chicago Booth Dean Madhav Rajan, the George Pratt Shultz Professor of Accounting. “This global presence enables us to better deliver on our twofold mission: to create knowledge with enduring impact and to influence and educate current and future leaders.” 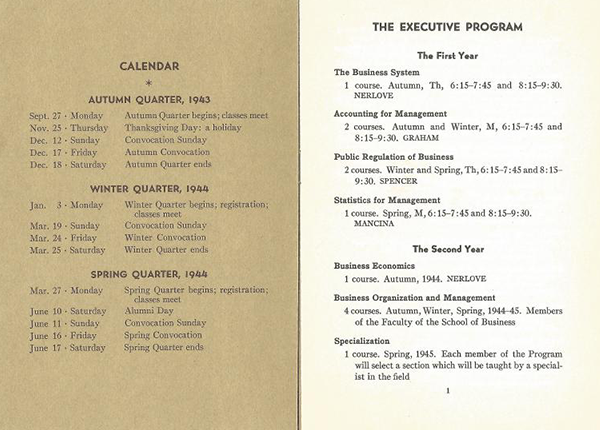 The inaugural class of 52 students met in downtown Chicago 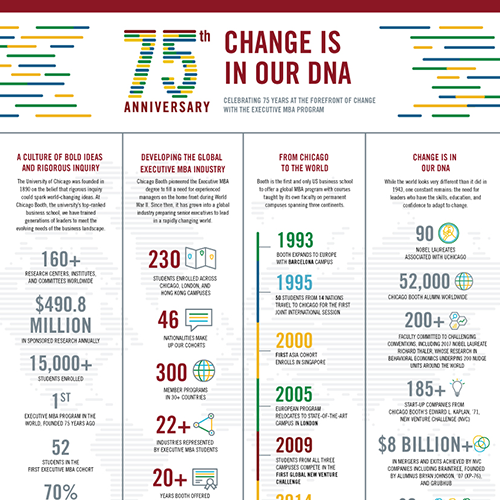