Super Mom and Evening MBA student Beth Davis shares what it’s like to be a new mom while pursuing an MBA. She talks to us about the best parts of parenthood and offers advice to prospective students who have or are interested in starting a family while at Booth.

Why did you choose to pursue an MBA?

When I began in the business world, I was at a start-up and I realized quickly that to move forward and to be a strong business leader, I needed a grounding in the fundamentals that I couldn’t learn on the job. Earning an MBA, especially from a place like Chicago Booth, would give me the education and network to pursue whatever endeavors came up in the future. That was really important because I wanted to not only transform my future, but know that I could always take care of my family as well. 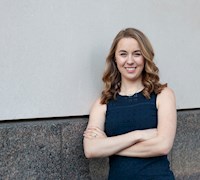 "There are so many Evening/Weekend program parents who are going through the same journey and you will have a support system of people you can relate to. It's 100% possible. People are doing this right now and you can, too."

Chicago Booth is a really special place with very special people. I’ve had conversations at Chicago Booth that I haven’t had anywhere else in my life. Attending an Admissions event is what really solidified my choice to come here. I met three female Booth students who were so impressive, smart, kind, and motivated. I remember talking to them and thinking that I wanted to be like those women. Not only were they great at that event, but some of them actually helped me with the admissions process by reading my essays and coaching me on my interviews. That willingness to get involved was so different than students at other MBA programs I looked at. It seemed like they were genuinely interested in helping me be successful. I thought, if they were this supportive and I’m not even a student yet, how is this actually going to be when I’m part of the program? The people I met at Booth were so different and so genuine.

How did your pregnancy impact your Chicago Booth experience?

I LAUNCHED (attended Orientation) in Fall of 2018 and found out I was pregnant January of 2020. My plan was always to graduate in Spring 2021, but I also wanted to take a break right when I had my son so I wouldn’t be trying to juggle everything while I had a brand new baby. What really helped me was the flexibility of Chicago Booth’s program because I was able to take extra classes leading up to my son’s birth. That way, I could take Autumn Quarter off when he was born and still graduate on time.

For the Summer Quarter, when I was getting ready to bid on classes, I looked at my calendar and realized that finals week was the same week as my due date. I had two classes I really wanted to take so I could finish some concentrations. I emailed the professors to tell them about the situation and see if they could work with me if I went into labor early, or if it was best to take another class. Within 24 hours, both of them responded and said they would love to have me in class and that we would figure things out. I ended up going into labor the day before one of my finals and had my husband email my professor to let him know. So it was not only the program that was flexible, but the professors as well. I was able to wrap up my finals a few weeks later after recovering from childbirth.

Tell us about juggling school, career, and family

It has been harder and more challenging than I could ever have anticipated. A lot of that was due to Covid as well. My husband and I were living in an apartment in downtown Chicago, during a pandemic, while working from home with a newborn. My husband is actually a Chicago Booth grad as well and having that support from him has made all the difference. He understands what it takes to be successful at Chicago Booth from a time, energy, and focus standpoint. Having a partner who is willing to be in this 110% with me has been incredible. He has been a super dad so I could be fully present, not just during classes, but also for group meetings and homework. We don’t have family in Chicago so it’s really just the two of us in this together. I’m grateful that my husband knew the situation I was in and he recognized that this was a priority in my life and was willing to make sacrifices.

What is the biggest challenge in pursuing an MBA as a parent?

I think Boothies in general are perfectionists in a lot of ways. We want to be the best at what we do in everything that we do. What I’ve realized in becoming a parent is that things are not going to be perfect, and I have to give myself a lot of grace. Everyone always told me that parenting was going to be hard but that it was going to be worth it, and I didn’t truly understand until having my son. There are some days where I feel like SuperWoman — work went well, I had a great class, the baby had a good day, and I got to spend time with my husband. Other days, I am on the verge of tears wondering how I’m going to make it work. You have both ends of the spectrum. I fully believe that God gives us what we can handle so my mantra has been “if this wasn’t meant to be for me, I wouldn’t have all this on my plate.”. Having that belief deep down has helped me get through those hard days. Yes, it has been incredibly challenging, but I also know that doing my MBA and working full-time is going to set a great example for my son. It’s made me stronger, more confident, and a better mother.

"The qualities that I gained from my MBA that I value the most, have been my confidence, my ability to problem solve, and my ability to think differently and consider things from all angles. These skills have not only made me a better employee, but they've made me a better mother and a much better spouse. Knowing that all the different aspects of ypur life enhance one another is a reason to pursue an MBA and to not be afraid of the juggling act!"

Do you have advice for prospective students who already have or are considering starting a family?

Don’t hesitate to apply because there’s never going to be the perfect time to do this. I didn’t anticipate having my son at this point in the program, but it all worked out. I have learned that there are so many other parents at Chicago Booth as well. For example, there were three other Chicago Booth moms that were going to have their children within a month of me. We meant to get together over brunch but then lockdown happened and we started a group text. We became a support system for each other, not just as moms, but as Boothies. It was really special to have that common bond with others who are going through the same journey. We continue to stay in touch and share milestones and ask questions.

You think you are going to have to carry this burden alone, but just as you network in your career, I’ve met Boothies who I’ve been able to network with for my personal life, too. There are so many Evening/Weekend program parents that are going through the same journey and you will have a support system of people you can relate to. It’s 100% possible. People are doing this right now and you can, too.

Also, I think it’s important to remember that it is okay to have a life outside of the classroom. You can still live your life and be an MBA student at a top-tier program and work full-time. It may sound like a lot, but you can handle it. In my opinion, it actually makes you better in those different aspects of your life, and not just in learning how to time manage. I feel like the qualities I gained from my MBA that I value the most, have been my confidence, my ability to problem solve, and my ability to think differently and consider things from all angles. These skills have not only made me a better employee, but they’ve made me a better mother and a much better spouse. Knowing that all the different aspects of your life enhance one another is a reason to pursue an MBA and to not to be afraid of the juggling act!

What did you wish you knew about parenthood before you became a mother?

I didn’t realize how hard it was going to be. I used to be the type of person who needed more than seven hours of sleep at night to be on point the next day, but that changed quickly after having my son. I realized that I’m much stronger than I ever thought I could be. No one was ever able to describe how amazing and wonderful parenthood is and how big your heart can grow. The way I feel when I look at my son is unlike anything I’ve ever experienced and it is truly better than I could have imagined.

What is the most rewarding thing about being a parent?

It’s the little things. Watching my son become such a happy, curious, smart little boy, and seeing him discover new things every day is wonderful. Watching him figure things out makes me so excited to guide him and show him the world. I feel so lucky that I get to be his mom.