The founder and CEO of Brazilian active-wear company Authen talks passion, determination, and his work to constantly become a better version of himself.

American entrepreneur Christopher Spikes, ’08, is the CEO and founder of Authen, a Brazilian active-wear and athletic-wear company with running apparel meant for women who have curvier shapes. Authen has been featured in Forbes, Vogue, and Women’s Health as an innovator in athletic apparel design.

“These are purpose-driven products,” says Spikes, a six-sport athlete who was a member of one of the winningest NCAA collegiate football programs of all time at Grand Valley State University in Michigan. “The multinationals like Nike make a shoe for every type of run workout, from base mileage to speedwork. There wasn’t a brand out there that maps clothes to those steps. That’s our point of difference.”

A child of a single mother in Grand Rapids, Michigan, Spikes grew up in a household of women who worked two jobs to put him in better neighborhoods and school districts, and give him a better chance at success. “I was encircled by women. That’s why I’m so dedicated to women’s empowerment,” he says. “I always get emotional when we get letters from Brazilian women who discovered running because they’re confident in our products, who’ve progressed from a 4 km fun run to a marathon.”

After my undergraduate years, I wanted two things: to be an entrepreneur and to have an international experience. The travel came first. I joined Siemens as a senior systems engineer, as they had offices in both Texas and Mexico City at the time. At Booth, I did an exchange in Spain, even though my Spanish wasn’t very good. In Mongolia, I studied meditation with monks. Based in Texas as a case team leader with Bain & Company, I participated in projects in Latin America and the Caribbean. When I did a six-month gig in Rio, I thought, “This is amazing. The city, the culture.” Then I ran the numbers. I looked at the size of the Brazilian market and thought, “Why wouldn’t you be in business here?”

Some people told me learning a new language was an obstacle to success. I saw it as an action item on a mission to start a business in Brazil. I took a job as managing director of Groupon Brazil, owned by Rocket Internet, on the premise that I would be speaking Portuguese when I started. I left my job at Bain to go to Brazil three months early, in order to take classes on Portuguese 5 hours a day, 5 days a week. I cut myself off from English. I credit my mom, my family, my friends: they gave me the space I needed to do so. I knew my goal was to eventually start a business here. What kind of business would I start? I didn’t know. The only way I’d find out was by living here.

The spark came two years later. I grew up a six-sport athlete, and I still spend hours outdoors—I run, hike, do yoga, and more. In 2013, I noticed that Brazilian women were still utilizing the fluffy socks of old-school fashion trends. They were missing the athletic fashion innovations from sports like running, yoga, and CrossFit. I saw a market gap in performance apparel designed for curvier bodies. I combined American engineering with Brazilian soul, creating products that offer fit, style, and performance.

Up-front costs are typical for any fashion business. I traveled to the United States looking for seed money. I talked to 200 people before I got to $300,000. I sold my house in the US. I dipped into savings. I didn’t pay myself. I camped out in the living room of my own house in Rio and rented out my bedroom as an Airbnb. I ate the cheapest meals. I took the bus to business meetings, lugging a big suitcase full of samples. Every three months, I’d look at my progress. “Yeah, I’m suffering, but it’s working. I’m learning.” I listened to my own advice: Be the protagonist. Take control.

We made rookie mistakes. We were too broad. We made products for men, for women, for yoga, running, CrossFit. We sold supplements. Our first collection was colorful, and we didn’t offer any black pieces. We had one size, medium. We thought we’d sell online only. Then a gym asked to put our products in their stores and we sold more there in 20 days than we had in six months. The channel strategy found us! Now, we have 400 points of sale in Brazil, including at sports chain Centauro and in gyms. We’re on our way toward real profits. 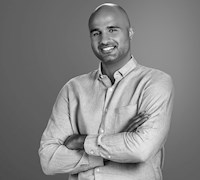 “People run to become the best version of themselves—but you can’t get to that place if you’re not protected and comfortable. That’s Authen.”

I’m an engineer, and I’d started an athletic fashion company. Still, performance apparel is in my wheelhouse—I combine my empathy, my engineering design thinking, and my athletic background to create these products. We designed a sports bra with shock absorbers, so straps don’t cut into skin. A sports bra for breast tenderness during PMS that’s super soft. A marathon sports bra, with straight straps instead of a racerback, in order to eliminate pressure on the back of the neck. All companies tell a story, and narrowing our focus to women’s running was a pivot point for the company, a distillation. People run to become the best version of themselves—but you can’t get to that place if you’re not protected and comfortable. That’s Authen.

The pandemic raised new challenges, as physical stores closed and street races were canceled. But we pivoted, and we’re seeing tremendous year-over-year growth as a result of our efforts—we grew 15 percent offline and 170 percent online in 2020. We focused on deeper content on social media and our blog, posting running and nutrition tips, home workouts, and live content. We also doubled our investments in helping multibrand wholesale stores sell online, and extended better payment terms and sell-out guarantees to give them peace of mind in this turbulent time. That led to them giving us more space in their stores, and our average ticket in that channel has almost doubled since the start of the pandemic.

During the pandemic, I ramped up my reading. I learned to learn. I read about Facebook ads, implemented them, and tripled sales. Now I workshop books with my staff. We read books by or about CEOs. It’s the best way to “spend a week” with Bill Gates, Steve Jobs, Nike founder Phil Knight. I’ve got a list of 50 books, including ones written by generals. Because they’re learning, there’s no churn or confusion among my directors. I use The Chicago Approach™ with them: ask, Why? Why not?

Two classes at Booth blew my mind. One was Little Red Schoolhouse (Academic and Professional Writing, offered at the University of Chicago) with Larry McEnerney, AM ’80. I learned about audience—whether they’re active or passive—about value, and desire and pain points. The other was Behavioral Economics with Christopher K. Hsee, where I learned about things such as confirmation bias and overconfidence. These classes helped me deal with people and my own biases.

Self-development is my hobby. I am always looking to be a better version of myself, so my leisure is very active. I recently took up an Afro-Brazilian martial arts practice, Capoeira, that destroys me. We have 50 people working for us locally who would work around the clock if they could, so we put limits on that and plan better. The main reason for our success is that we deliberately and willingly focus on exposing and then dismantling our fears, weaknesses, and ignorance to make way for a better version of ourselves. This guides everything we do, and it resonates with a lot of our runners. It’s constant growth—a constant process of becoming.

—As told to Anne Moore