Return to the Pitch

After years of studying the sport, Sachin Mylavarapu, ’21, has led his team to success in Minor League Cricket.

When Sachin Mylavarapu, ’21, first walked Oxford University’s historic cricket pavilion in 2013, his jaw dropped. He had played semiprofessional cricket in his native Singapore. Now he was looking up at the names of some of the greats of the sport, emblazoned in gold letters on the walls.

“In Singapore, I was playing for the enjoyment of the game and the honor of playing for my country,” he says. “In England, I was suddenly aware of the legacy and history of the game.”

That realization came with an intense pressure to succeed against brawny English cricketers in a first-class league—the second highest level of the sport. “I’m an average-build Asian man. Most of my teammates were much bigger than me, and I felt like they were judging the whole of Singapore by how I played,” Mylavarapu says. But he didn’t have to wait long to show what he could do.

In his team’s annual match against archrival Cambridge, the left-handed bowler (the equivalent of a pitcher in baseball) took five wickets, getting out half of the 10 batters he faced—a huge accomplishment. (Not to be outdone, one of his teammates set a record for runs in the same game.)

“That took a lot of the edge off for me,” Mylavarapu says. “I could show what I was capable of—that I belonged.”

Mylavarapu hasn’t succeeded at cricket by being the most physically dominating player. He has excelled by outsmarting his opponents—just as he has excelled in his career as a financial consultant with New York–based investment banking firm Evercore.

“What differentiates cricket for me is the mental aspect of the sport,” Mylavarapu says. “There’s a lot of thinking that goes into the game, and the more you play the more you keep learning. One game is never the same as any other, because you have all of these factors, including different ground conditions—whether the pitch is dry, or grassy, or has clay underneath.” 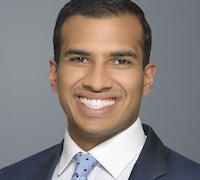 “There’s a lot of thinking that goes into the game, and the more you play the more you keep learning. One game is never the same as any other.”

Cricket is one of the world’s most popular sports, with billions of fans, especially in India, Australia, and the United Kingdom. A quick lesson: there are two bases on an oval-shaped field. One team bats while the other fields, similar to baseball, though cricket employs two batters who alternate batting, then switch bases to score a run.

“Instead of 90 degrees in baseball, you can hit it 360 degrees, so it opens up so many more dimensions to the game,” says Mylavarapu. He plays as bowler, who must bounce the ball once on the pitch and try and hit the wicket (three sticks arranged behind the batter) to get the batter out. Cricket has two kinds of bowlers: pace bowlers drill the ball as quickly as they can, and spinners put spin on the ball to bounce it unpredictably past the batter. Mylavarapu employs the latter style, using his left hand to bowl even though he bats with his right, and enjoying the mental duel with batters as he tries to place the ball where they don’t suspect it will be.

Mylavarapu’s father played cricket professionally in India, but it wasn’t until Mylavarapu was 13 that he realized he himself was good at it, and was drawn to the sport’s intellectual variety.

After playing cricket semiprofessionally in Singapore, Mylavarapu came to Oxford for a master’s in engineering, economics, and management, where he continued to show promise on the first-class team. “I got access to amazing coaching and conditioning with people who think very deeply about the game, and who allowed me to take it to the next level,” he says.

In addition to competing against some of the United Kingdom’s top players, he also joined the elite Oxford Marylebone Cricket Club University, an academy for players training to become professional cricketers. As he came to the crossroads of deciding whether to pursue cricket or go on to a corporate career, however, he judiciously decided on the latter course. “Being a professional sportsman is so difficult,” he says. “It is such a large risk to take, and you could be good enough and still not make it due to other factors such as politics or team composition.”

He spent two years in Dubai and two in New York working as a senior consultant at Oliver Wyman, advising banks and private equity clients on strategy and mergers, before coming to Booth for his MBA in 2019. “It gave me a much broader perspective, beyond the basic concepts of finance and analysis, to really being able to understand how business leaders think,” says Mylavarapu.

While he might have thought that his cricket career was done, Mylavarapu got a second chance on the pitch when he discovered that Minor League Cricket was launching in the United States in 2021.

With 27 teams around the country, and Toyota as its main sponsor, the league is making a major push to bring cricket to the US with top-name players from India and the West Indies, and plans to expand to a Major League in 2023. Mylavarapu joined the New Jersey Stallions, and in 2021, he helped lead the scrappy team all the way to the US Minor League Cricket championships.

Unlike some of the other teams, which boast star players, the Stallions found strength in their tight team play, says Mylavarapu. “We knew each other’s roles really well and were able to execute as a cohesive unit,” he says. “It was a full team effort all the way through.”

At 30, Mylavarapu is one of the older players on the Stallions, but makes up for his age with his experience, mentoring younger players on the fine points of the game. Mylavarapu often plays in a part of the game known as the power play, when fielding restrictions require much more precision of the bowler. “You have a much smaller margin for error,” he says. “You have to put it in just the right place and keep thinking one step ahead of the batsman.”

The teamwork and mental game of the Stallions led them to win the Atlantic Conference, beating out the Empire State Titans last October. The next day, they took on the Silicon Valley Strikers for the final. Despite a strong opening, the Stallions ended up narrowly losing to the West Coast team.

Even so, Mylavarapu has been pleasantly surprised with how cricket is starting to take off in the United States. “Just after the finals, all of these kids were coming up to ask for my autograph, and they weren’t all expats or Indian kids; they were all kinds of Americans who have grown up liking the sport.” Even as he continues to hold a full-time job, he is already thinking about perhaps playing in the Major League, and even trying to qualify for the USA national team in the future.

“I really thought my cricket-playing days were done, but this is a chance for me to have a second shot,” he says. “As long as I keep enjoying myself, I want to keep playing cricket at the highest level I can for as long as I can.”

Come as you are. “You don’t need a lot of equipment to start—just a good pair of shoes that give you traction on the grass. (Unlike baseball players, cricket fielders don’t use gloves.) As you progress, you will want to get good bats and protective equipment, but you don’t necessarily need any of that to start.”

Work your way up. “The best way to start is by being a good fielder. That’s always a big value-add to the team. If you figure out you have a talent for hitting the ball, then you can try batting. Bowling is probably the most difficult to learn because there is a whole mechanics of how you have to do it.”

Get loud—but politely. “There is constant shouting that happens on the field when you are playing—providing encouragement to the bowlers, lifting the team’s spirits, making sure everyone is engaged and paying attention. But you never want to say anything personal to the other team. There is a strict kind of spirit to cricket—it’s supposed to be a gentleman’s game. You can say, ‘That was nowhere near the bat’ or something, but don’t say anything about a player’s mother or father.”

Just play! “There are local clubs everywhere now, and they are always looking for people who are interested in learning the game. Don’t be disheartened if you don’t get it straight away—no one does. As long as you enjoy it and have a good day out, come back the next day, and I promise you cricket is a game that is easy to fall in love with.”