Financial trust increased from 22 percent in 2008 to 28 percent at the end of 2018, according to a survey marking the 10-year anniversary of the financial crisis.

Ten years after the financial crash of 2008, Americans’ trust in financial institutions is on the rise, increasing from 22 percent in 2008 to 28 percent in 2018, according to the Financial Trust Index (FTI), administered by the University of Chicago Booth School of Business and Northwestern University’s Kellogg School of Management.

Though the past decade has shown a sharp increase in financial trust, that rise was not a linear path. After an initial recovery between 2008 and 2010, financial trust took another dip in 2011 and 2012. 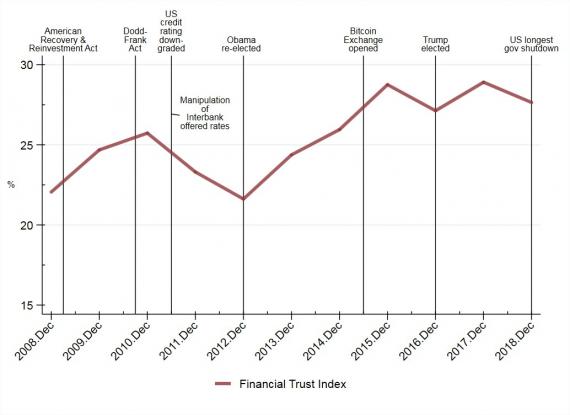 Three components of the FTI -- trust in the stock market, mutual funds, and large corporations -- reached its lowest point at the end of 2008, which was the peak of the financial crisis. While there were some dips in the FTI, all three components grew steadily over the next ten years. In particular, trust in the stock market rose steadily after the re-election of President Obama until a small drop in 2018.

The most severe dip in this series occurred in 2011, when the Libor and JPMorgan London Whale scandals erupted, undermining the confidence that banks’ problems were under control.

By contrast, trust in large corporations was very low in 2008 (11 percent) and, while seeing an increase to 16 percent today, remains very low. 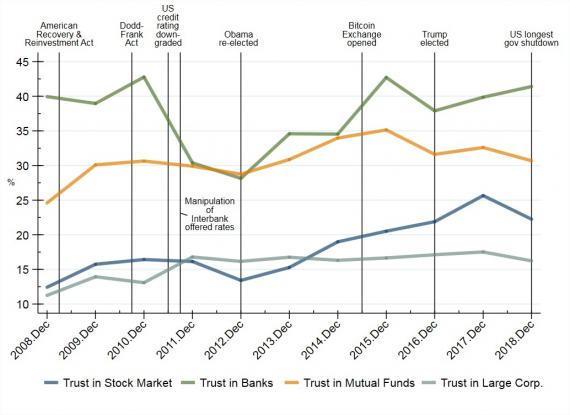 The percentage of Americans who reported anger about the economy dropped from almost 60 percent in 2008 to 27 percent today. Americans reached their peak in 2011, with 62 percent responding that they were angry about the economy. As the economic growth consolidated, however, and unemployment dropped, the level of anger also subsided.  Trust in media was: the New York Times (37 percent), the Wall Street Journal (36 percent), CNN (34 percent), Fox News (28 percent), and Facebook (8 percent). 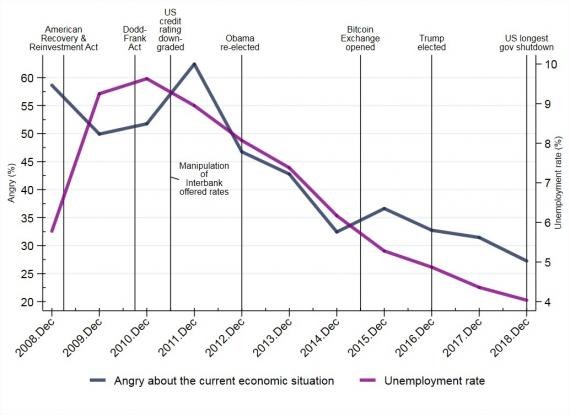 About the FTI survey

On an annual basis, the Financial Trust Index captures the level of trust that Americans have in institutions. The study was conducted for the Financial Trust Index via telephone by SSRS, an independent research company. Interviews were conducted during the period December 18–27, 2018, among financial decision makers. A total of 1,010 interviews were conducted, with a margin of error for total respondents of +/-3.74 percent at the 95 percent confidence level.  More information about SSRS can be obtained by visiting www.ssrs.com.