In designing the contact tracing algorithm for India’s official COVID-19 contact tracing app, this Booth student relied on learnings from the Big Problems course to balance efficiency and ethical considerations.

When Full-Time MBA student Aalekh Sharan returned home to India to study remotely in late March 2020, the country was preparing to launch a mobile phone app to track cases of COVID-19. Sharan joined as the data science and contact tracing lead on the app, Aarogya Setu (“Bridge to Health”), which would use Bluetooth data to alert users when they had been in contact with an infected person and anonymized location data to warn the government of emerging hotspots.

“I wanted to make an impact,” said Sharan. “And I felt that the Booth training put me in good stead.” Right off the starting line, he was called upon to make tricky decisions with far-reaching implications—for instance, how would the contact tracing methodology balance the trade-offs between privacy and efficacy? Previous experience with designing privacy-preserving artificial intelligence during a previous stint as officer on special duty to the CEO of the Indian government’s think tank, the NITI Aayog, proved handy—he had worked on national strategies and projects on artificial intelligence and distributed ledger technologies. He also had the opportunity to learn from the personal example of his boss, Amitabh Kant, CEO of NITI Aayog, who is widely credited with driving national programs such as Incredible India and Make in India for the government. 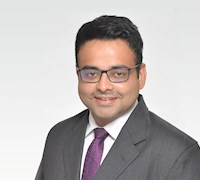 “I was able to work in an agile manner and take confident, data-driven decisions about the algorithm as well as about trade-offs on privacy versus efficacy, in large part due to the training I already received at Booth.”

Facing the COVID-19 crisis, Sharan credits his past professional experiences combined with his Booth education to carry the day. “I was able to work in an agile manner and take confident, data-driven decisions about the algorithm as well as about trade-offs on privacy versus efficacy, in large part due to the training I already received at Booth,” Sharan said. “In fact, to convince people of a particular path or the urgency of doing something quickly, I think I acted like a quintessential Booth MBA by accompanying every note with at least a simulation result, due to the paucity of data on this crisis.” This approach allowed him to work effectively with the diverse set of public and private sector leaders contributing to the development of Aarogya Setu—including some of his past colleagues from NITI Aayog such as Arnab Thakur and some of India’s top startup founders.

Aarogya Setu has become the fastest app in history, anywhere in the world, to reach 50 million downloads—it did so in just 13 days—and as of mid-May has reached 100 million downloads. The app has also earned praise from Microsoft founder Bill Gates.

Sharan is bringing these insights into the Big Problems course he is taking this quarter, which gathers students from Booth and the Law School to learn from professors from across UChicago: Booth’s Kevin Murphy and Robert Topel, and the Law School’s Anup Malani and David Weisbach, with contributions from the Department of Ecology and Evolution’s Luis Bettencourt. Sharan is focusing his class project on possible incentive structures for COVID-19 testing and tracing at scale and the legal implications of private sector participation in testing.

“The course enables you to gain from the experience and the immense wisdom not only of the professors—Murphy talking about the economic implications of the crisis, Malani, on India’s challenges in battling the epidemic, Bettencourt about models—but also of fellow students,” he said. His teammates on the project include Wyatt Lawyer and Owen Brownson from Booth, and Marina Mehrtens from the Law School.

Sharan’s itinerant childhood took him through eight schools, including in the United States. With a civil-servant father, he grew up immersed in government and policy debates. Although he studied engineering at IIT-Delhi, among India’s top-rated technology schools, he wanted his first job to be in the social sector, “to make more impact on human lives through technology.” So he joined the University of Chicago’s International Innovation Corps, which brings together young graduates to work in the social sector, figuring out everything by themselves—from strategy to product development—with the aim of making the most impact possible in one year. Sharan spent that year creating mini-grids for villages for a public sector enterprise, India’s Central Electronics Limited and working with India’s greenfield smart city program to prepare sustainability plans for new smart cities.

A fitness startup followed, which failed quickly but left Sharan with some lasting lessons and invaluable experience. Next came the NITI Aayog stint, before he decided to pursue an MBA at Booth, “to get my hands dirty and go deeper, because in the government you can go broader but going deeper becomes progressively more difficult.”

After graduation, Sharan wants to explore product development. For now, he recently gave an online masterclass on the topic of balancing privacy and the public good, and he is working on future iterations of Aarogya Setu. He hopes to better optimize data use from the app’s expanding user base, while improving the contact tracing algorithm to save more lives at the minimum possible resource and privacy cost.

Booth News & Events to Your Inbox

You are now signed up to receive news, event notifications, and stories from Chicago Booth. Thank you for taking this step to hear more about our community!