Who Stocked Up before COVID-19 Hit

Americans started to stockpile food and necessities even when few people in the United States had yet felt the impact of the coronavirus pandemic firsthand, find Northwestern’s Scott R. Baker, Columbia’s R. A. Farrokhnia and Michaela Pagel, University of Southern Denmark’s Steffen Meyer, and Chicago Booth’s Constantine Yannelis.

And while there were differences in how politicians reacted to the looming crisis, both Democratic and Republican shoppers stockpiled, the research finds. In fact, the research data show that Republicans spent more than Democrats early on.

Economists have long recognized that expectations play an important role in consumption decisions. The late economist Milton Friedman posited that individuals spend based on what they think they will earn in the future, not just on what they currently earn, and this has stood up to experiment. Stanford’s Luigi Pistaferri, for example, looked at Italian household consumption in 1989–91 and demonstrated that Italians reduced spending in anticipation of falling future wages and higher taxes. Another study, from 2001, found people increasing consumption ahead of tax rebates or reducing it in expectation of health troubles.

Stockpiling regardless of political affiliation

As the COVID-19 news spread in March 2020, Americans across the political spectrum increased their grocery shopping, with Republicans initially spending more than Democrats. 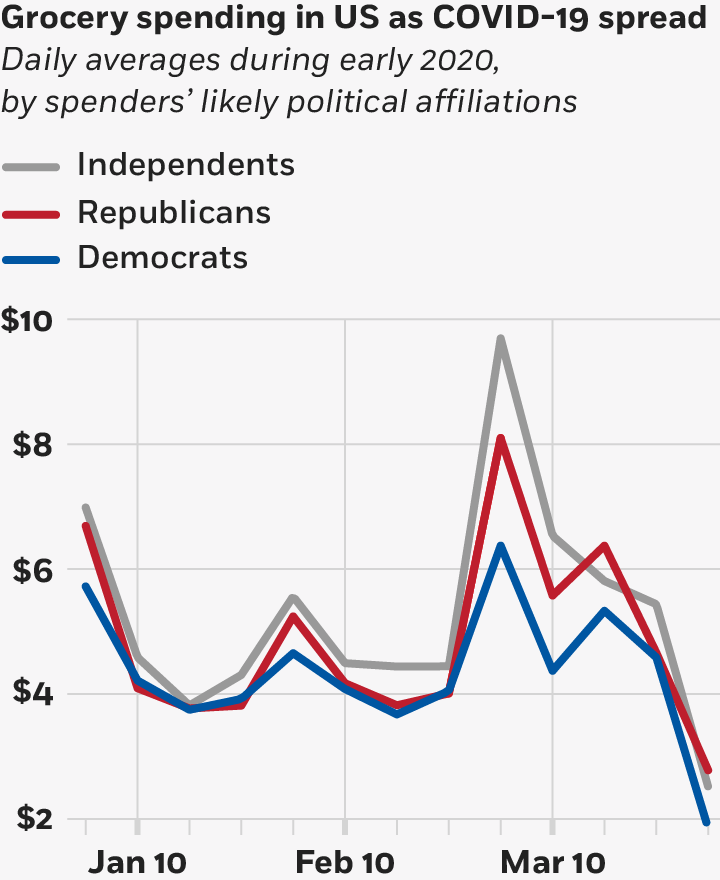 So how do people shop in anticipation of a pandemic? Baker, Farrokhnia, Meyer, Pagel, and Yannelis analyzed data from more than 44,000 anonymized bank accounts, provided by a nonprofit (which they don’t name) aimed at helping people increase their savings. The data confirm that an expectation of trouble ahead drives spending decisions.

Consumers increased retail and other spending in the early weeks of March, according to the data. Household spending overall rose by 50 percent in the two weeks through March 11 and remained elevated in some categories, such as groceries, throughout the month. In other areas, such as restaurant and public-transport spending, a surge early in the month was followed by steep declines in later weeks as the seriousness of the crisis became clearer and shelter-in-place orders came into effect in some regions.

The reaction was similar regardless of income. While the data set skews toward lower-income Americans, individuals earning less than $40,000 per year, there were few differences between the ways low and higher earners reacted, according to the research.

The consumption reactions were also bipartisan. Using demographic data that the nonprofit had collected from its users, the researchers created a political profile for each anonymized-bank-account holder and rated individual holders on their likeliness to lean left or right politically. A woman aged 30, earning $40,000 a year, and living in Brooklyn might be given a rating of 90 on a 0–100 scale, where 0 is very likely Republican and 100 is very likely Democrat.

The researchers worked with only the bottom and top quartiles of the scale to reduce mistaken matches between demographics and politics. They find that Republicans were just as likely to stockpile in early March as Democrats were. “Some of us were expecting a big difference in the way people with different politics reacted,” says Baker, citing the starkly different positions taken by Democratic versus Republican politicians about the seriousness of the virus—and evidence from phone data that people who had voted for US president Donald Trump were less likely to observe social-distancing guidelines than those who hadn’t. “But there was actually little difference in consumption patterns.”

In fact, Republicans spent more than Democrats early in the month. “While we see significant evidence of stockpiling for both groups, the percentage increase in grocery spending by Republicans is approximately twice as large as the increase among Democrats,” the researchers write, though Baker notes this might be in part due to household size or other factors.

However, there was a gender split in reactions. Women were more prone to stockpile early in the month and to curb their restaurant visits in later weeks. Similarly, people older than 30 were more likely than their younger peers to either stockpile early or to restrict spending later.

As data accumulate, the researchers expect to learn more about how the crisis affects bill paying, how consumption patterns change in response to economic distress, and how stimulus money is spent. The data might also provide a window into how gig-economy workers are affected.