Since 1980, the number of traditional C corporations has fallen, while the number of pass-through businesses has risen sharply. The rise has allowed mostly very wealthy individuals to pocket about $100 billion that would have gone toward taxes under traditional corporate structures, according to research by economists at the US Department of the Treasury, the University of California, Berkeley, and Chicago Booth.

The study—by the Treasury’s Michael Cooper, John McClelland, James Pearce, Richard Prisinzano, and Joseph Sullivan; University of California at Berkeley’s Danny Yagan; and Chicago Booth’s Owen Zidar and Eric Zwick—documents the soaring popularity of pass-through structures, which allow business earnings to be taxed as individual income and typically at significantly lower rates than earnings in traditional corporations. Pass-through businesses are not directly taxed. Instead, their earnings are “passed through” to the individual shareholders, who are required to report their portions of earnings and losses on personal tax returns and pay taxes accordingly. By contrast, C corporations pay corporate taxes, and their shareholders also pay individual taxes on any distributions.

Tax breaks for pass-through businesses have come under fire recently from Americans concerned about the quickly widening gap between low and high earners. Between 1980 and 2013, the top 1 percent’s portion of all earnings doubled to 20 percent, according to previous research by study team members. During that time, pass-through entities grew from convenient structures for independent workers and small businesses into popular tax-saving devices for high-income earners, corporations, and foreign investors.

The researchers were unable to trace some 30 percent of pass-through earnings to an individual recipient—a surprisingly high percentage, they write, in a system that links businesses with their responsible taxpayers and is designed to hold shareholders accountable.

Their use of comprehensive tax data, including all partnership filings as well as individual K-1 filings on all partnership income, allowed them to depict a novel picture of the tax savings that pass-through entities provide specific industries. Almost all hedge funds are partnerships, for example, and some 70 percent of all partnership income comes from these and other financial companies. The study estimates that financial partnerships are taxed 15 percent on average, as opposed to the 32 percent corporate rate. The traditional partnership industries pay the highest rates, with professional services and health care at an average 22 percent.

The findings call into question the business-tax collection estimates commonly used in economic models for forecasting and research. The decline in average business-income-tax rates documented by the study suggests that the commonly used statutory rates on C corporations for this work—35 percent for annual corporate taxes, or 45 percent, including dividend and capital gains taxes—considerably overestimate actual business-tax collection. The movement of business income into pass-through entities, the study shows, significantly lowers the average. 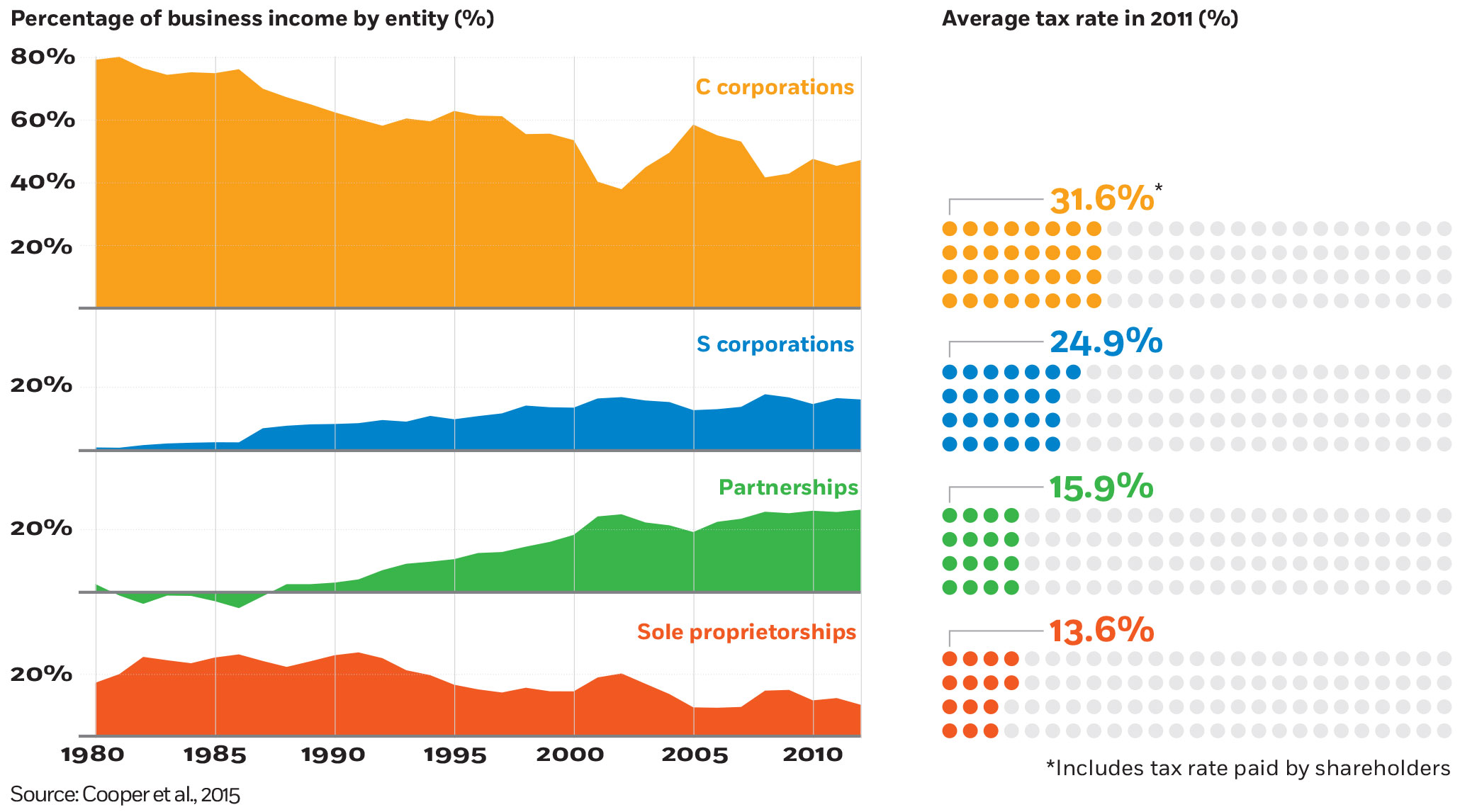