But research by Chicago Booth’s Lubos Pastor and Pietro Veronesi suggests that betting on Trump for healthy stock market returns over the full course of the presidency is misguided.

The reason has to do with what finance researchers have termed the Presidential Puzzle. From 1927 to 2015, stock market returns under Republican presidents were on average 11 percent per year lower than under Democratic presidents. In fact, the returns were better on Treasury bills. Why would the market perform poorly under Republican administrations? No one knows, hence the puzzle moniker.

But Pastor and Veronesi propose an explanation. They argue that Democrats tend to take power during financial crises, while Republicans take over during periods of prosperity.

During market crises, voters tend to kick out Republicans and elect Democrats, perhaps wanting a stronger social safety net. For example, voters left behind the George W. Bush years and elected Barack Obama during the 2007–10 financial crisis, and Franklin D. Roosevelt took power from Herbert Hoover after the onset of the Great Depression.

Thus Democratic presidents tend to take power when stock valuations are low and risk aversion is high, and they benefit from the postcrisis stock market rebound. In Obama’s case, his 2009 swearing in came a month and a half before the stock market recorded its financial-crisis low, so a rebound to even precrisis levels made returns under the Obama administration appear very strong.

The cycle of risk aversion 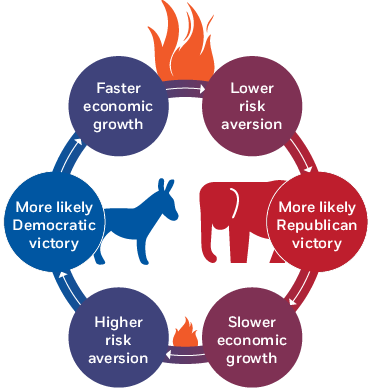 On the flip side, once the economy recovers, stock valuations increase and risk aversion falls. In this environment, expected returns on the market are lower—but people are feeling bolder so vote low-tax Republican candidates into the White House. George W. Bush was sworn in after the 1990s internet boom, when stock valuations were high—and just a month and a half before the economy went into recession.

Looked at in light of Pastor and Veronesi’s research, the Presidential Puzzle has more to do with the overall risk aversion of voters and simple timing.

This framework is based on insights from the economic model the researchers built, which represents a stylized world in which workers in a society are either entrepreneurs or civil servants, and can choose to be one or the other during different presidential administrations. The model assumes that Democratic administrations are characterized by higher taxes and Republican ones by lower ones—a premise for which there’s ample empirical evidence, the researchers say.

The Equation: Appetite for risk can shape elections 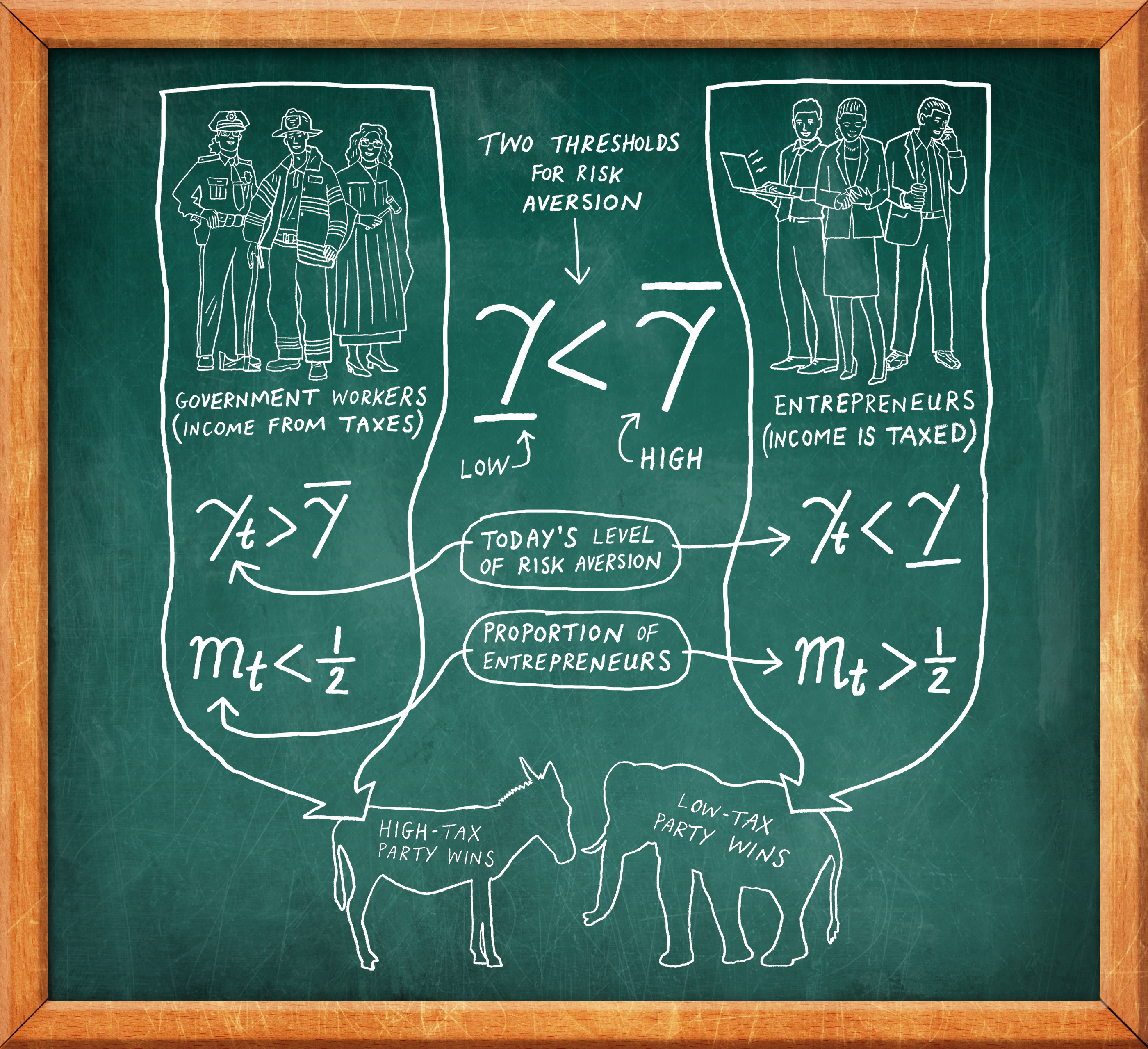 The model predicts that during crises, entrepreneurs and civil servants alike are more averse to risk taking and believe they’ll gain more from government wealth distribution. Therefore they’ll be relatively more likely to vote Democratic. Pastor and Veronesi note that transitions to high-tax, left-leaning parties do tend to occur during times of economic crisis.

Using additional assumptions, Pastor and Veronesi’s model also predicts faster economic growth under Democratic presidents. That prediction is also supported in the data. From 1930 to 2015, US real GDP growth under Democratic presidents averaged 5 percent a year, whereas under Republican presidents that was closer to 2 percent. Political cycles thus arise naturally: when growth is low, voters’ risk aversion rises, leading to Democratic victory—after which growth rises, leading to Republican victory, and so on.

Can Pastor and Veronesi’s model explain the postelection run-up? According to the researchers, the market anticipated lower tax rates, which are positive for investors. But before you buy into the Trump rally, keep in mind that history has not been kind to stocks under Republican presidencies.