Why Internet Advertisers Should Target the Over-65s

Digital marketing may conjure images of advertisers scrambling for the attention of young digital natives. But research suggests internet ads may shape the shopping habits of baby boomers more than millennials—and the older the internet users, the stronger the effect.

Randall A. Lewis and David H. Reiley Jr., both former researchers at Yahoo, studied more than 1.5 million shoppers while working with an anonymous national retailer to track results of an ad campaign targeting Yahoo users. The study, conducted in 2007 and published in 2014, finds that the potency of the ads increased along with the age of the user: they had hardly any effect on users between 20 and 40 years old, but they had a significant impact on those 50 to 80. For users over 65, the influence of the ads was particularly strong. 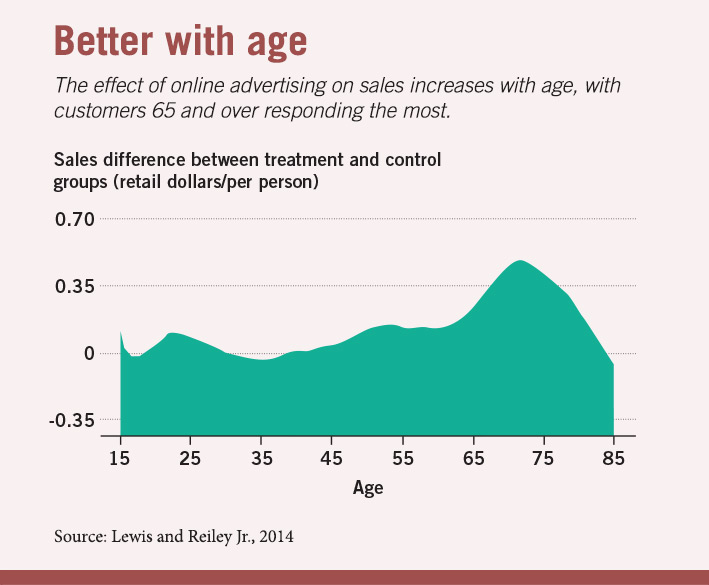 The researchers focused on how online ads impacted both online and in-store sales. To conduct the study, Lewis and Reiley (now at Netflix and Pandora, respectively) matched users who viewed the ad campaign on Yahoo websites with the retailer’s sales data to track purchases. During the two-week-long advertising campaign, users in the study’s test group saw the retailer’s ad (along with various other ads) on 7 percent of the Yahoo pages they visited.

For test-group users aged between 70 and 75, 35 percent of total purchases could be attributed to exposure to the advertising, compared to just 5 percent for those aged 40–65. Users 40 and older spent six times as much as a result of the campaign than those under 40; while users 65 and older spent 10 times as much in response to the ads as those under 65. “The effect of advertising on sales increases with age,” the authors find.

The impact of the advertising was not only uneven between age groups, but also between online and offline sales. The sales increase attributable to the ad campaign was more than six times higher per user for in-store sales than for online sales. “The ads appear to have induced [their audience] to do more research online and more actual shopping in brick-and-mortar stores,” the researchers write. What’s more, the ads were no more effective on older users than on younger users when it came to online sales alone.

There are plenty of possible explanations for why online campaigns might have more baby boomers running to the store. For one, “repetition of a message tends to induce beliefs more strongly in older individuals than in younger ones,” the researchers write. And of course, retirees may have more disposable income than younger users, as well as more leisure time for browsing online and walking the aisles.