Why Did Drivers Switch to Premium during the Recession?

Economics uses the principle of fungibility, in which every dollar in income or spending is equivalent to any other. Generally speaking, this means that if a person loses $100—whether it’s because his (or her) income falls or the prices he pays for things rises—he needs to make $100 worth of spending cuts in his budget.

The fall of 2008 was tough for many Americans. More than two million jobs were lost within a few months, and millions more people feared their jobs were next to be cut. Households cut back sharply on spending as they felt the pinch of what turned outto be the worst economic downturn since the Great Depression.

But amid all the belt-tightening, many households did something surprising: they switched to premium gasoline. Research by Chicago Booth Professor Jesse M. Shapiro and Justine Hastings of Brown University suggests this activity challenges an assumption that underpins many economic models.

But the researchers discover a different pattern in data about gas purchases. In the fall of 2008, sharply declining income levels should have led consumers to cut back on luxuries such as vacations, new cars, or premium gas. In the latter case, however, that’s not what happened. “During this period, although almost all indicators of consumer spending and well-being were plummeting, households substituted to higher- octane gasoline,” the researchers report. Many households drastically cut back on auto and retail purchases, yet their propensity to buy mid-grade or premium gasoline increased by almost four percentage points.

Why? The evidence points to the fact that gasoline prices fell in the fall of 2008 amid declining world demand for oil, brought on by the recession. Even though households were poorer overall, they acted richer at the pump, perhaps because low prices encouraged them to feel like they had room to spend more on gasoline.

Other patterns tell the same story. In the first half of 2008, the average price of regular gasoline in the United States increased from $2.98 to $4.10 per gallon, and premium gas went up along with it. For economists, who treat a price increase as equivalent to an income loss, that jump translated to a $1,313 loss in income for a typical household. A regression analysis applied by the researchers implied that a $1,313 loss would result in a 0.02 percent rise in the share of regular gasoline used, relative to the total gas used. 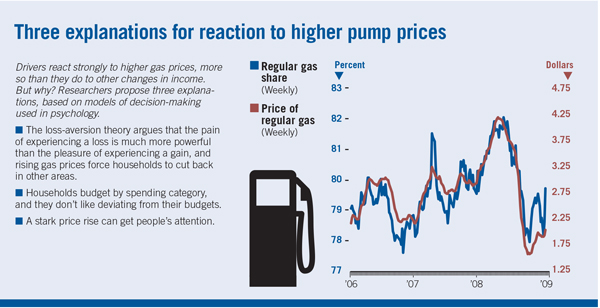 Instead demand for regular gasoline rose far faster than the math had suggested, increasing as a share of fuel purchases from 80.2 percent to 81.6 percent. Had the fungibility model held, “the gasoline price spike in 2008 would have had to decrease household incomes by almost $100,000,” the authors write.

The authors suggest this departure from the fungibility principle is due to consumers doing more complex mental accounting at the pump—reacting more to gas prices than to other factors such as overall income. When gas prices rise, a household that buys premium gas is likely to switch from premium to regular. However in a recession, as long as gas prices are low, that same household may keep buying premium.

Why are consumers so sensitive to gas prices? The authors propose that models of decision making used in psychology “might plausibly account for a violation of fungibility.” 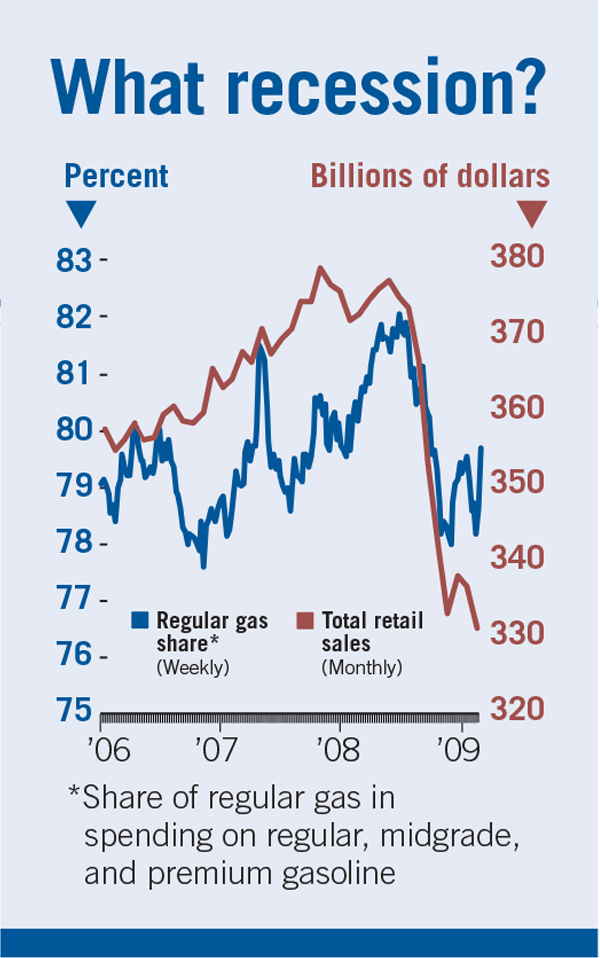