Why Active Managers Have Trouble Keeping Up with the Pack

There is no shortage of money managers who claim they can beat market benchmarks, some with impressive track records.

Can a cat make more money in the stock market than a professional investor?

The UK’s Observer newspaper ran a competition in 2012 to find out. It pitted the stock-picking abilities of Orlando, a ginger feline, against three experienced money managers and a gaggle of high schoolers. The cat and the other two groups were each given an imaginary £5,000 at the start of the year to invest in stocks. By year’s end, the students were down to £4,840, while the professionals had actually made money, accruing £5,176. Meanwhile, Orlando, who selected his stocks by throwing a toy mouse on a grid of numbers allocated to different companies, had amassed £5,542.

This was more fun than science, but it underlines a serious premise that has come to dominate the academic literature on finance in the last 40 years (and which Chicago Booth faculty helped develop): that professional stockpickers who beat the market are merely lucky, rather than more skilled.

That insight has fuelled an explosion in passive investing. The investment-management firm Vanguard has amassed $2 trillion in investors’ assets largely on the premise that the average investor can’t beat the market, so should simply invest in low-fee index funds. Vanguard’s Total Stock Market index mutual fund, which tracks an index created by Chicago Booth’s Center for Research in Security Prices, currently manages $318 billion and is the biggest mutual fund in the world.

Yet there is no shortage of money managers who claim they can beat market benchmarks, some with impressive track records. And one stream of research suggests that some people can identify and profit from mispriced securities in the stock market. Lubos Pastor, Charles P. McQuaid Professor of Finance at Chicago Booth, believes that money managers are not only skilled, but becoming ever more skilled over time. So should you dump your index funds and buy actively managed ones? Not so fast.

Among those challenging the conventional wisdom that beating the market is more about luck than skill are Jonathan Berk and Richard C. Green.

In 2004, Berk (then at Berkeley, and now at Stanford) and Carnegie Mellon’s Green published a pioneering paper suggesting that an individual manager can have skill—and can beat the market by an average of 6.5 percentage points.

This same research also suggests that it’s hard to maintain market-beating performance. Although a manager can be skilled, the job is made harder as investors recognize and reward that skill. Half a dozen empirical papers have since tested and supported this hypothesis. The challenge is that as investors recognize a manager’s skill, they place more assets under his management. Those additional assets make it harder for the manager to achieve the same level of performance—among other reasons, because the bigger a fund is, the more likely it is to move prices. If a manager invests $100,000 in a company, it may go largely unnoticed. If he invests $1 million, he may raise the stock price in the process. The upshot is that while some money managers can beat the market, they can ultimately become victims of their own success. 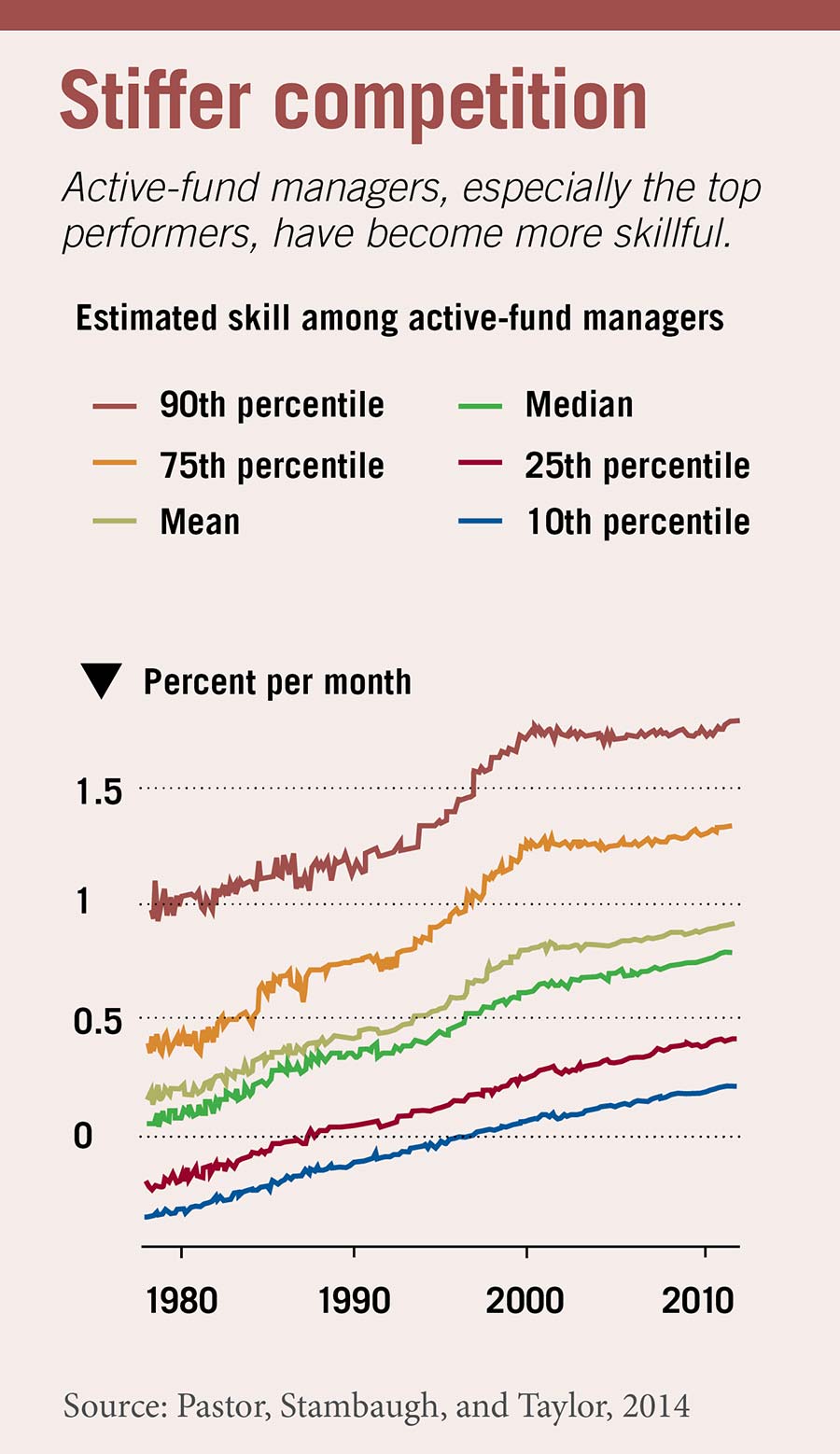 They also have competition

Pastor and Wharton’s Robert F. Stambaugh, a Chicago Booth alumnus, find another explanation for why otherwise clever, well-trained managers find it hard to maintain success. They devised a model showing that as more money flows into actively managed funds in the entire industry, it becomes harder to beat the market. As the model was theoretical, Pastor and Stambaugh teamed up with Pastor’s former student, Wharton’s Lucian A. Taylor, to test it.

The researchers examined the performance of 3,126 funds from 1979 to 2011, a period that saw dramatic growth in the industry. In line with theory, they find that as the industry grows, it becomes harder for managers to outperform. According to the research, a modest percentage-point increase in industry size, measured as a fraction of total stock-market capitalization, leads to a performance decline of 40 basis points (bp) per year for a typical fund. Industry size seems to affect fund performance more than fund size does: a $100 million increase in the size of a fund—which is a substantial increase, considering the median fund size is $250 million—depresses the fund’s performance by only 2 bp per year.

The negative impact of industry size on performance is especially large for funds that have higher turnover and volatility as well as for small-cap funds. “Funds that are aggressive in their trading, as well as funds that trade illiquid assets, will see their high trading costs reap smaller profits when competing in a more crowded industry,” Pastor, Stambaugh, and Taylor find.

The researchers define skill as the fund’s performance exceeding a benchmark on the first dollar invested in the absence of any competition. Skill is thus defined as the fund’s “alpha,” or benchmark-adjusted expected return, with a further adjustment for the fund’s size as well as the industry’s size. This definition enables the researchers to measure the fund manager’s stock-picking ability before its erosion due to any size effects.

They find that money managers’ average skill increased from 24 bp per month in 1979 to 42 bp per month in 2011. And they find the improvement in skill to be steeper among the better-skilled fund managers: in the top 10% of funds by performance, skill grew from 98 to 123 bp per month. They also find that younger funds outperform older ones (see “Young funds perform better . . . for a while”).

This rise in skill parallels the skill increase in other areas of human endeavor, such as science and sports. In the 1896 Olympics in Athens, it took 12 seconds to win men’s 100-meter sprint. In contrast, to win gold in the 2012 Olympics in London, Usain Bolt ran the same distance in 9.63 seconds. Just like athletes get better over time, so do fund managers, the researchers say, hypothesizing that the rising level of skill in the fund industry reflects better education. Newly minted MBAs leave school armed with the latest thinking, and as new managers, they embrace more sophisticated technology.

Unfortunately for investors, this rise in skill has failed to boost fund performance. Although fund managers have become more skilled in recent decades, fund performance relative to passive benchmarks is no better today than it was, say, 30 years ago. The reason, the research suggests, is that the industry has grown at the same time. For example, the number of actively managed funds rose from 145 in 1979 to 1,574 in 2011. The researchers argue that when the industry grows, so does competition, especially from new funds. It is harder to outperform in a bigger and more competitive industry.

What it means for investors

From an investor’s perspective, it matters little whether managers are skilled or not, because fees eat up much of whatever skill and market-beating ability exists. Before costs and fees, active managers on average beat their benchmarks by 5 bp. After costs and fees, they underperform the benchmarks by 5 bp. Therefore the evidence continues to favor passive investing. “Is it possible to beat the market?” Pastor asks. “Yes. Do investors benefit? No.”

“I am definitely convinced that fund managers can have skill,” says John Rekenthaler, a Booth alumnus who is now Morningstar’s vice-president of research, citing the Sequoia Fund, actively managed by the investment firm Ruane, Cunniff, and Goldfarb. The fund, recommended by Warren Buffet in 1970, has done well consistently for 44 years, beating its index nearly every year in that time period. “These managers are not thrashing the market,” says Rekenthaler. “They are beating it by 1% or 2%. But what if the industry wasn’t as big as it is now? If we sent these managers back to a 1979 market would they get a 12% return? It’s something we can’t test, something we can’t know.”

Knowing why well-trained, smart management can’t get huge returns is unlikely to change the way people invest. But Rekenthaler says the research is the beginning of a larger discussion, and Pastor says he wants to change how people think about active managers.

When people see mediocre fund performance, they often jump to the conclusion that the fund manager has no skill, he says, but notes that fees can disguise a manager’s skill. Managers who fail to beat their benchmarks, net of fees, can perform very well—they can beat benchmarks before fees are paid. His research might also light a fire under managers new and old, and inspire them to invest in cutting-edge knowledge and technology. “Today’s active-management industry is bigger and more competitive than ever before,” he says. “It takes more and more skill just to keep up with the rest of the pack.”