When It Makes Sense to Raid Your Savings Account

Good news: Americans are putting more money in the bank. But diligent savings behavior may have gone too far.

Good news: Americans are putting more money in the bank. The savings rate rose from 2.5 percent in November 2007 to 5.8 percent in February 2015, according to the US Bureau of Economic Analysis.

But diligent savings behavior may have gone too far. When an emergency makes spending necessary, people are reluctant to withdraw money from savings, particularly when it has been set aside for specific purposes, research suggests.

Chicago Booth’s Abigail Sussman and Harvard’s Rourke Liam O’Brien asked a group of study participants to imagine needing $1,000 to cover the cost of an emergency. Then they gave the participants a choice: withdraw funds from a savings account earning 1 percent interest, or borrow the money using a credit card that incurs 12 percent interest. 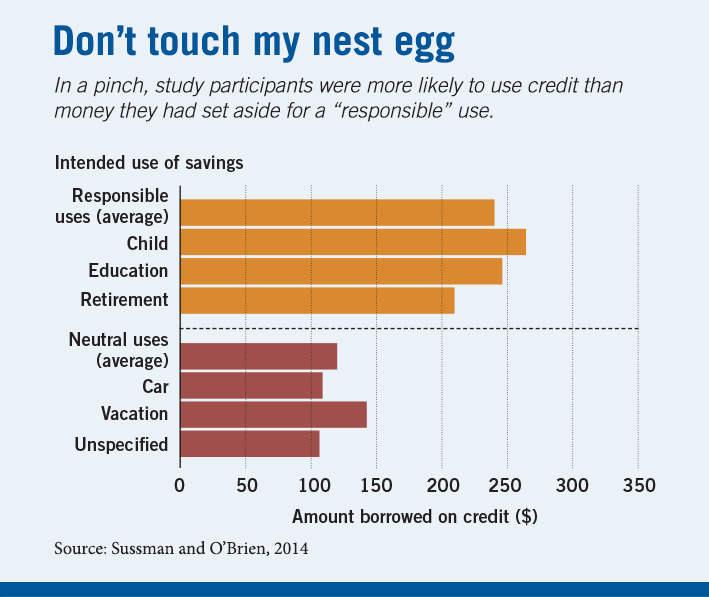 Despite the significant financial advantage to drawing from savings, the participants were reluctant to do so, especially when savings were intended for “responsible” uses such as paying for college or retirement. The participants were most reluctant to raid funds set aside for children—a finding that held even when that money wouldn’t be spent on children for many years.

While opting for high-interest loans might seem irrational, it is consistent with other recognized spending biases in which consumers treat money as nonfungible, Sussman and O’Brien say. According to research by Hersh M. Shefrin of Santa Clara University and Chicago Booth’s Richard H. Thaler, people are more likely to spend from current than future income, whereas other research by Thaler indicates people tend to spend less money from pension and home equity than other assets.

The researchers identify a possible solution: automatic repayment plans. When participants had more confidence in their ability to replace their savings, they were more willing to use savings when needed.