What Were the Preliminary Economic Effects of China’s Lockdowns?

On January 23, 2020, the Chinese government locked down the city of Wuhan in Hubei Province, imposing travel restrictions in a bid to prevent the spread of COVID-19. In subsequent days, the authorities took similar measures in other cities in Hubei and throughout China.

These actions to protect public health had an enormous, negative impact on economic activity, according to preliminary estimates by Business Big Data’s Qin Chen, Chicago Booth’s Zhiguo He and Chang-Tai Hsieh, and Chinese University of Hong Kong’s Zheng (Michael) Song. 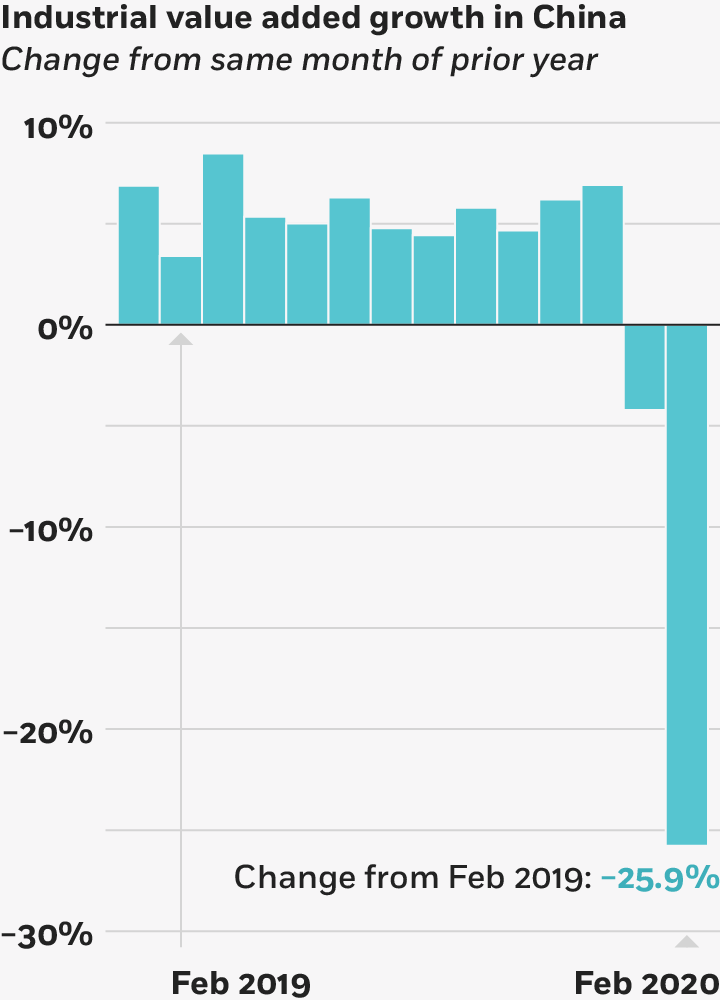 To analyze the effects of the lockdowns, the researchers started with official data on industrial output. Data from China’s National Bureau of Statistics for February 2020 (the most recent available as of March 23) indicate that industrial value added (a measure of private firms’ contributions to GDP) fell, on a year-over-year basis, by 4 percent in January and 26 percent in February.

The average growth in industrial value added in 2019 was nearly 6 percent, so the slump looks even more dramatic when compared with what the measure’s expected values would have been had the epidemic not interrupted the trajectory. 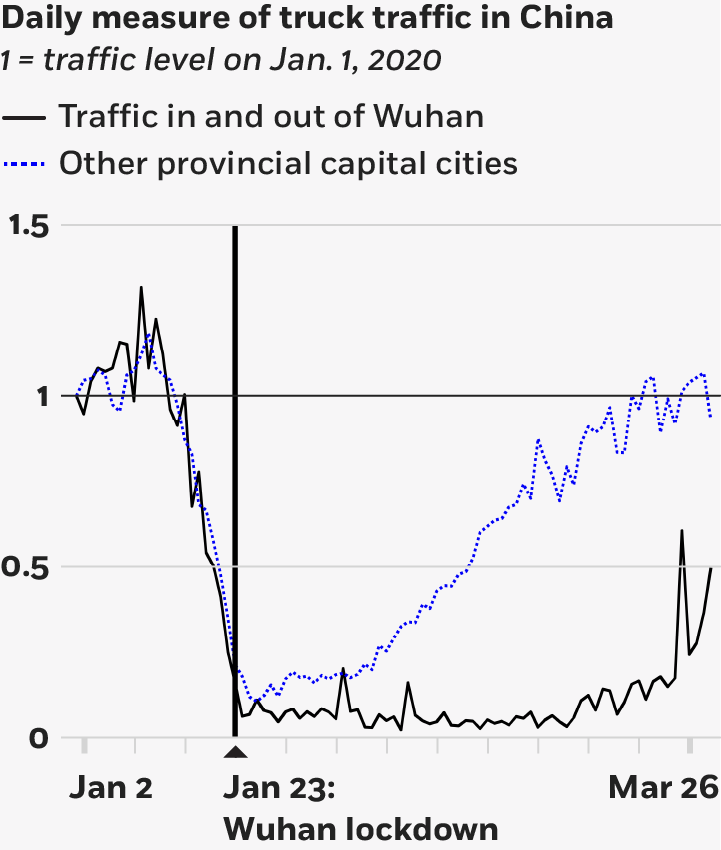 Trucking shipments in and out of Chinese cities

An alternate way to measure industrial output is to look at data on the shipment of goods between Chinese cities, so the researchers also analyzed trucking flows, using data from a private trucking company. The company, G7, provides logistical services to drivers and has real-time GPS data from 2 million trucks, accounting for about 10 percent of all trucks operating in China. Chen, He, Hsieh, and Song aggregated the movement of trucks in and out of a provincial capital each day, in the period just before and during the lockdowns.

A decline of truck flows before the Wuhan lockdown captures the slowdown associated with the approaching Chinese New Year, on January 25. Then, the data suggest the flow of goods between Wuhan and other provincial capital cities remained low because of the lockdown. While truck flows between the other provincial capital cities recovered, they were still, by late March, about 25 percent below their levels of early January. 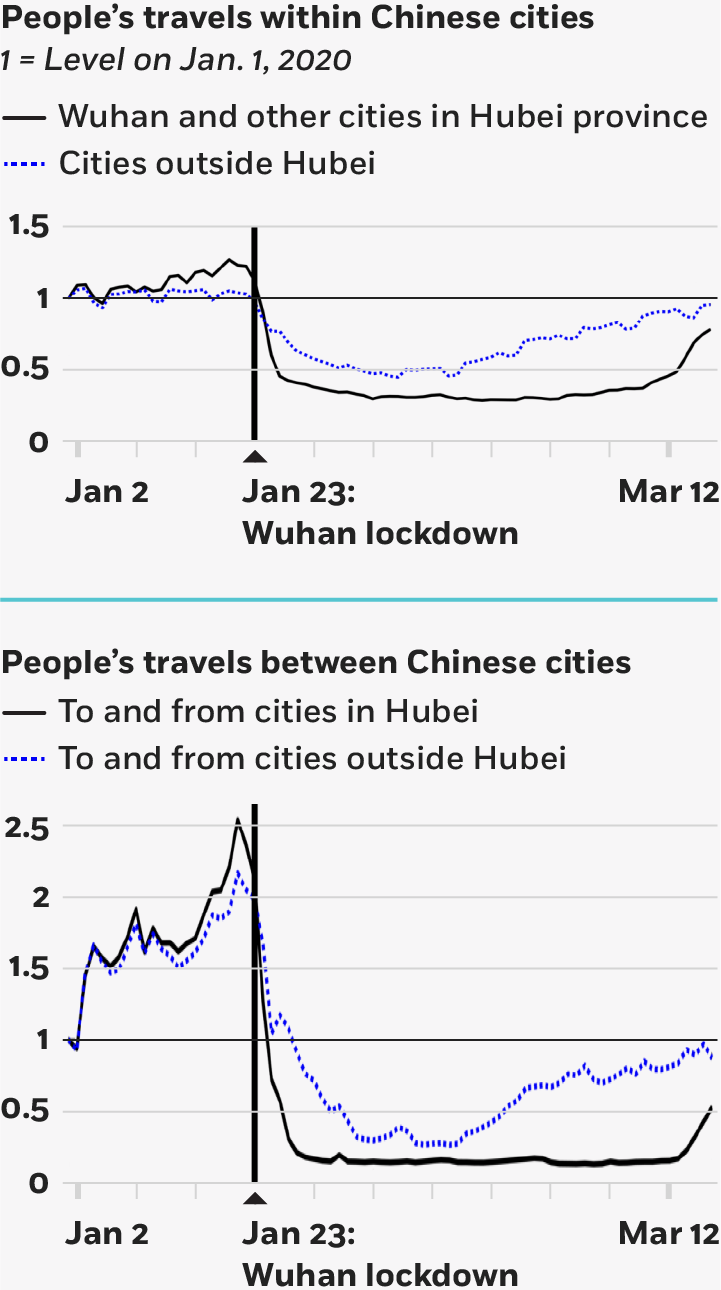 People’s movements within and between cities

Data from several other sources allowed the researchers to see how people reacted to the lockdowns. Indices of peoples’ movements, provided by internet search-engine and mapping giant Baidu, indicate that when China imposed lockdowns, people’s activities were curtailed within days. The index reflecting the intensity of travel within cities dropped by more than half in just three days and remained low for six weeks, only to pick up in mid-March. The indices outside Hubei recovered more rapidly, and by March had almost reached their level of early January. Travel to and from cities in Hubei was nearly frozen, and travel between other cities also experienced a sharp decline, though to a lesser extent.

Meanwhile, according to location data from three major mobile carriers, when the Wuhan lockdown was imposed, many people stopped going to offices and shopping malls and hunkered down at home instead. And sales data from an undisclosed online platform tell the same story, showing that the share of sales going to digital and electronic goods fell dramatically, while the share going to groceries spiked.

“In sum, the economic impact of lockdown on China is large, severe, and perhaps still mounting,” despite various massive economic and financial policies quickly rolled out by top authorities in Beijing, write Chen, He, Hsieh, and Song. In terms of economic recovery, they note, China faces a daunting challenge, especially because the deteriorating pandemic situation around the globe has brought China’s export sector almost to a halt, and could make it difficult for Chinese companies to access critical inputs.