Two economists find that agencies with expiring budgets spend their end-of-year funds on low-quality, wasteful projects. They suggest that a simple change could lead to more responsible fiscal decisions.

Popular anger over wasteful government spending is a common theme in advanced and developing countries alike, fueling political standoffs, parliamentary crises, and street demonstrations. Two economists, Assistant Professor Neale Mahoney and Harvard’s Jeffrey B. Liebman, have research that could help: using procurement spending data from the US federal government, they find that agencies with expiring budgets spend their end-of-year funds on low-quality, wasteful projects. They suggest that a simple change could lead to more responsible fiscal decisions. 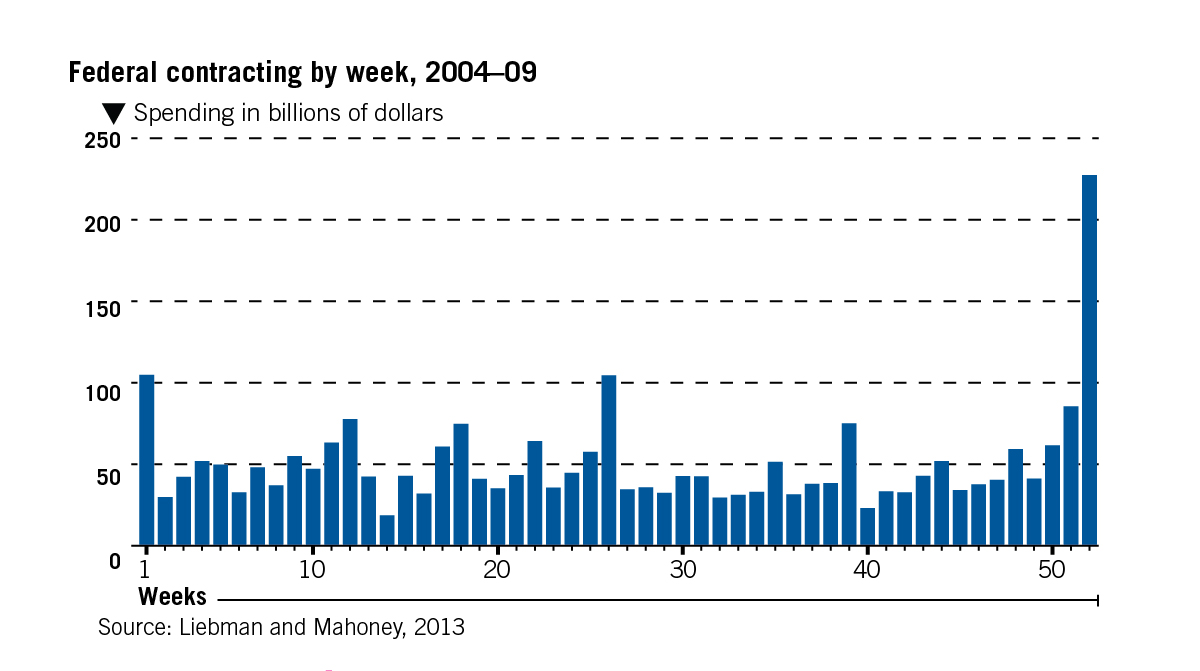 As in public-sector spending cycles around the world, most US federal agencies must use all of their discretionary budgets before the end of the fiscal year or return the unused portion to the Treasury. If Congress interprets the return of funds as a sign that the established budget is too large, lawmakers could cut the agency’s budget in the following fiscal year. Consequently, agencies have an incentive to spend any money left in their budgets, regardless of whether such spending is justified or not.

Mahoney and Liebman find that this use-it-or-lose-it approach results in higher spending in the last week of the fiscal year, 4.9 times higher than the weekly average for the rest of the year. Using newly available data that tracks the quality of $130 billion in federal information technology (IT) projects, they also find that quality scores for year-end projects are 2.2–5.6 times more likely to fall below the median value of IT projects committed to throughout the rest of the fiscal year.

Their solution: allow agencies to roll over unused funds into the next fiscal year and don’t let Congress use the funds as a gauge by which they reduce future budgets

The researchers point to a positive example of the rollover effect at the Department of Justice (DOJ), which in 1992 obtained special authority to roll over unused funds from its IT budget, up to 4% of annual revenue, into the following year. The researchers discover that year-end spending on IT projects at the DOJ is considerably lower than non-IT spending at the department, and it’s lower than year-end IT spending at other agencies. Additionally, they find that the department’s year-end IT spending did not drop in quality.

Mahoney and Liebman offer some suggestions for making a rollover policy successful. For one, if Congress allows agencies to roll over funds, perhaps it should not raid those funds during that time for other purposes. Second, Congress also should commit to preserving in future budgets the amount of money rolled over. Without these commitments, agencies are likely to reject the rollover option.

Finally, the researchers discuss some reasons for caution: a rollover policy gives Congress less control over agency spending and may allow agency personnel to procrastinate and delay spending, more so than they could if their budgets expired at the end of each year—but the researchers argue that those risks are worth the ultimate reward.