Global stock markets in the past few years seem to have paid as much attention to politics as to corporate fundamentals, with prices surging and plunging in response to every twist in the eurozone crisis or the political gridlock in the United States. However, a formal framework to study the effects of political uncertainty on markets has been missing from mainstream finance theory. To fill this void, Chicago Booth Professors Lubos Pastor and Pietro Veronesi have developed a new general equilibrium model of government policy choice in which stock prices respond to political news.

At any given time, Pastor and Veronesi explain in their paper, uncertainty about what actions governments will take in the future affects how investors trade. Investors form their beliefs about those future actions by observing political signals in debates, statements, and news stories. They respond to such political news, thereby affecting asset markets.

The researchers find that stocks’ risk premium is most influenced by politics in weak economic conditions. This is because when the economy is doing poorly, the government is most likely to “do something about it,” that is, change policy—but the question of which area of policy will be changed leads to greater uncertainty.

Moreover in a weak economy, market prices are influenced by two opposing forces. On the one hand, investors have confidence that the government will intervene. On the other hand, their confidence is compromised by the fact that they cannot diversify away the risk that stems from government intervention. Consequently, the market becomes more volatile, and stocks move more in tandem in response to political uncertainty.

In today’s extremely volatile political climate, the risk premium from political uncertainty is having significant impact on already weak economies. The model from Pastor and Veronesi could help investors and governments understand those risks and thus offer new tools that could be used to mitigate them. 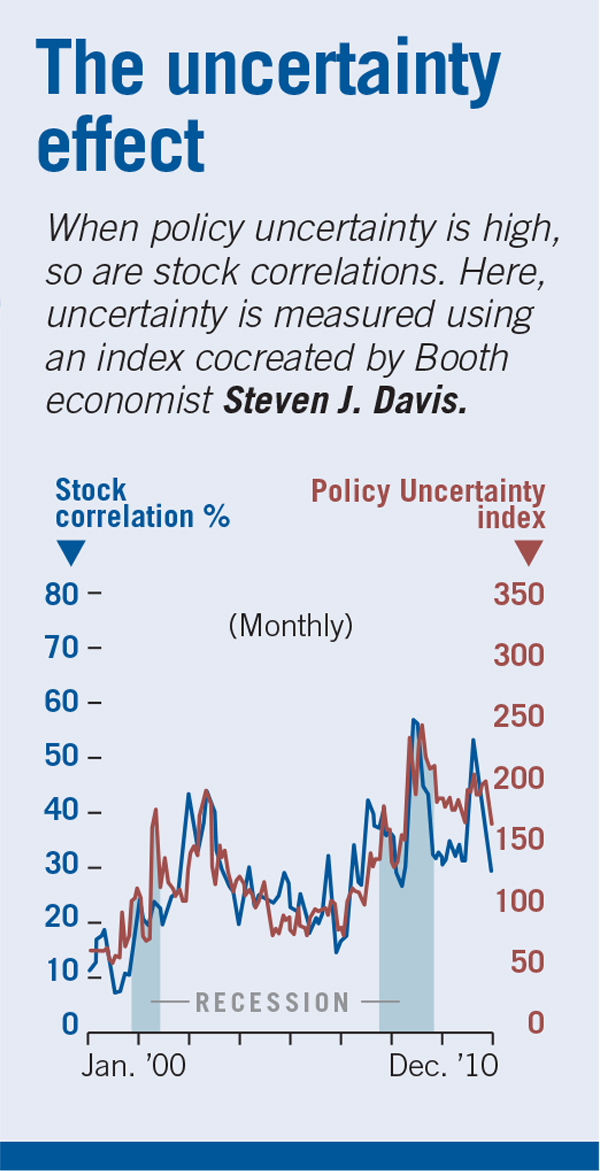