Neighborhoods with high income overstatements on mortgage applications suffered harsher consequences during and after the recession.

Mortgage credit flooded into low-income, low-credit-score neighborhoods during the US housing boom of the mid-2000s. On the basis of income reported on mortgage applications, some researchers have concluded that higher-income homebuyers were moving into these poor neighborhoods and driving the mortgage-credit explosion.

But a study from Princeton University’s Atif R. Mian and Chicago Booth’s Amir Sufi suggests that mortgage applications from these neighborhoods were routinely falsified to make borrowers’ earnings appear higher than they were. The findings point to fraud, rather than gentrification, as a key driver of the mortgage boom and subsequent bust. (The researchers don’t address who committed the fraud, as they can’t tell whether the borrowers were lying, or the brokers filling out the application were, or both.)

Looking at 2002–05 data from Chicago’s Englewood and Garfield Park neighborhoods, the researchers find that income reported to the Internal Revenue Service was significantly less than income reported on mortgage applications. According to tax-return figures, nominal income growth in these two relatively poor neighborhoods was a mere 1.9 percent, indicating that real income actually declined. But annualized growth on mortgage applications was 7.7 percent—much higher than the citywide average of 4.3 percent. The 5.8 percent gap between IRS numbers and mortgage-application incomes in Englewood and Garfield Park compared to almost no gap in other Chicago neighborhoods. 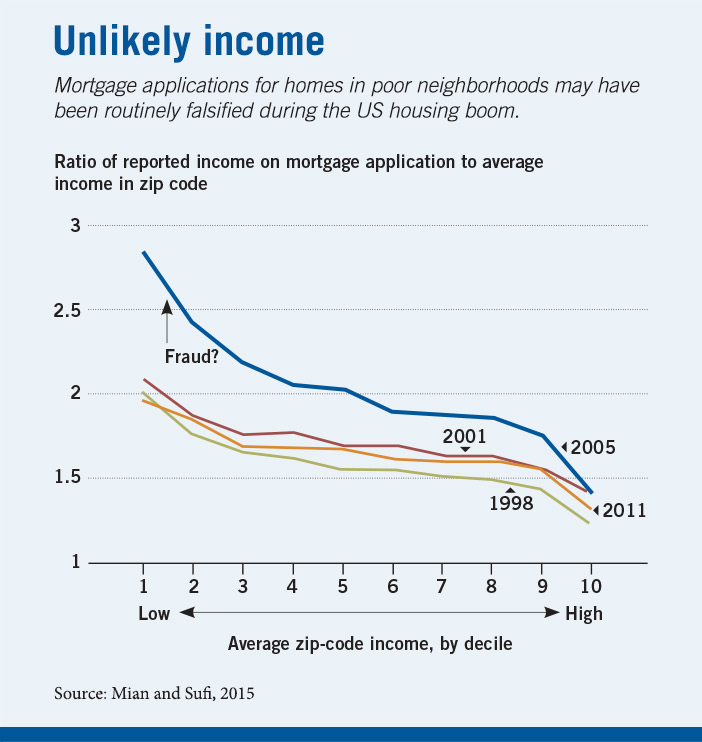 US-wide data show that a pattern of dishonest reporting appears in similar neighborhoods around the country during this time, according to Mian and Sufi.

Financial institutions would naturally be more interested in poorer neighborhoods if their residents were getting richer. But Mian and Sufi found that this was not the case in the early 2000s. For example, Englewood and Garfield Park together saw an average 55 percent growth in mortgage credit between 2002 and 2005, compared to 27 percent growth for the rest of Chicago, even though the IRS data indicate that their residents experienced no economic improvement during the period, the study shows.

Mian and Sufi also say the expansion of credit without an underlying rise in income had devastating effects. Neighborhoods with high income overstatements on mortgage applications suffered harsher consequences during and after the recession, reporting high loan-default rates, low or negative income growth, and increased poverty and unemployment.

The authors note that from 1991 to 2007, IRS-reported income growth always correlated with growth in income reported on mortgage applications, with one exception: the correlation was zero in markets of nonconforming loans between 2002 and 2005. The credit boom saw an explosion in nonconforming or non-GSE loans, typically made to borrowers who did not have to meet the stricter credit requirements of government-backed mortgages.