Large lenders and underwriters misled both borrowers and securities investors during the ill-fated housing bubble. Research by Chicago Booth faculty identifies some of their deceptive practices, which created markets for subprime mortgages.

To interest borrowers in expensive loans, lenders ran misleading advertisements, according to a study by Gregor Matvos, associate professor of finance, and Amit Seru, professor of finance, both at Booth, with Umit Gurun of the University of Texas at Dallas. A January 2007 ad in the New York Post touted a mortgage company that was “specializing in the 1% mortgage,” and offered the “lowest fixed rates available” and “lowest payments around.” But this ad, like many others that appeared at the time, failed to mention that such loans had a reset rate, which is the higher interest rate a borrower must pay after a so-called reset date arrives, typically two years after a loan is originated.

Customers who signed on for loans with higher reset rates paid a hefty price. An adjustable rate mortgage from a lender that failed to mention a reset rate in an ad likely cost a borrower an additional $7,440 per $200,000 borrowed, assuming that the average borrower paid the higher reset rate for three years. This calculation doesn’t include the loss a borrower incurs if he or she defaults, and the likelihood of defaulting increases significantly with a higher interest rate. 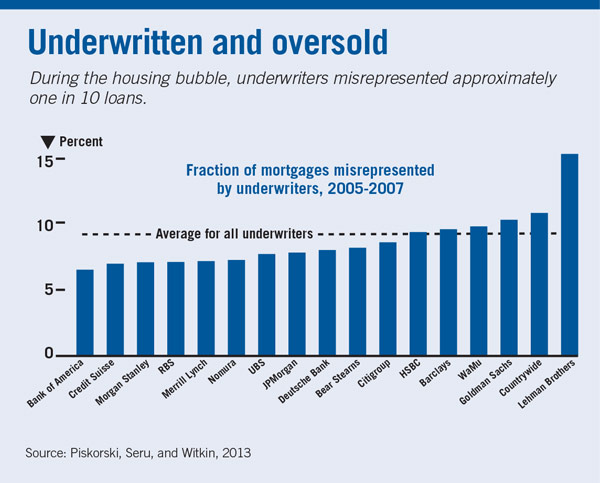 The researchers also find evidence that lenders used ads to target customers in areas with more minorities and fewer college-educated households. “Lenders exploited the lack of information consumers have about the nature and price of mortgage products,” write the authors in their March 2013 working paper, "Advertising Expensive Mortgages."

Meanwhile underwriters, who organized the sale of mortgage-backed securities and were responsible for collecting and verifying information about the quality of the underlying collateral, misled investors.

Prior to 2007, before the mortgage bubble burst, underwriters led investors to believe that the quality of the loans being pooled into mortgage-backed securities was better than it actually was, according to another study by Seru, this time with Tomasz Piskorski and James Witkin, both of Columbia University.

In some cases, underwriters falsely reported that a loan was backed by an owner-occupied home. In other cases, they falsely reported that a loan was backed by a property that had no other mortgage associated with it. In either case, the loan would have been considered riskier had the reports been accurate because the characteristics the underwriters failed to report are associated with higher default rates. “A significant degree of misrepresentation existed across all underwriters, which includes the most reputable financial institutions,” note the authors.

The underwriters had help from mortgage lenders, who deserve at least part of the blame, the researchers conclude. Data suggest that some lenders didn’t know of the false claims, yet lenders didn’t make an effort to verify and correct their brokers’ screening practices either, say Seru, Piskoski, and Witkin. And the same data, from a large subprime lender, show the lender intentionally reclassified loans with two liens, disguising that added risk.