Hospital patient records are being digitized, and financial, clinical, and outcomes data are piling up. Medical devices attached to patients generate real-time information, as do health apps on patients’ own mobile phones and wearable devices such as Fitbits and Apple Watches. All these data are enabling researchers to find and address inefficiencies in hospitals. The end goal: help hospitals care for the sick while also being operationally and fiscally efficient.

The Big Question: Is Big Data Making Us Healthier?

An expert panel discusses how hospitals and health-care systems can use the information they collect to improve patient outcomes and lower costs.

The Big Question: Is Big Data Making Us Healthier?

Why Attempts to Cut Medical Wait Times Can Backfire

Patients in many developed countries with public health-care systems have to wait a long time for elective surgeries such as hip replacements—a problem that policymakers have tried to tackle in a variety of ways.

Why Attempts to Cut Medical Wait Times Can Backfire

How Math Can Improve Drug Trials and Save Lives

Operations management experts are developing a model for clinical trials that could speed up research, save money, get better treatments to patients, and save lives.

How Math Can Improve Drug Trials and Save Lives

1. Test blood at the bedside

When a patient arrives in an emergency room, medical professionals have to work quickly to identify and treat the problem. But determining a diagnosis can involve drawing blood for tests, and getting the results back can take time.

For example, when doctors think a patient may be having a heart attack, they administer a test for the protein troponin, which the heart muscle releases when it’s damaged. The higher the troponin levels in a patient’s blood, the more likely it is the patient is having a heart attack. ER nurses place blood samples in test tubes and often send those to a lab that’s located elsewhere in the building, where the samples wait in a queue until technicians have time to test them. The results get logged into the hospital’s computers, at which point the doctor or nurse can view them.

The researchers studied a large, academic hospital that treats 55,000 patients annually. They find that when a hospital converts a single test from central-lab processing to bedside (also known as point-of-care) testing, patients who arrived during peak hours and needed that test were served 22 percent faster. If a bedside test indicates a problem, “the nurse can go and interrupt the doctor and say, ‘The test results demonstrate we need to act now,’” DeHoratius says.

In fact, bedside testing reduced service time for all patients, not just those who received it. Removing the troponin tests from centralized processing freed up space and technician time for other patients’ tests, allowing those patients to be served 5 percent faster. “Patients who have the lowest priority, identified as those who are the least sick, experience the greatest improvement in waiting time, 35.5 percent during peak hours compared to patients in higher priority classes,” the researchers write.

That faster service is also higher quality. Looking at the 72-hour readmission rate, a common measure of emergency-room-service quality, the researchers find that service quality improved by 0.6 percent for a typical patient.

The researchers are now looking at how to prioritize which tests should be done at bedside, given nurses’ workload constraints.

There’s another way to keep patient traffic flowing in the hospital and ER: use hospital beds more efficiently. Busy hospitals could better manage their resources by optimizing their use of hospital wings, research suggests.

Average hospital bed occupancy has risen in the past decade, and the capacity situation is particularly strained in large cities and at urban teaching hospitals such as University of Chicago Medicine (UCM), which has to balance treating urgent-care patients with those who come to the hospital to benefit from its expertise in treating complex medical conditions. 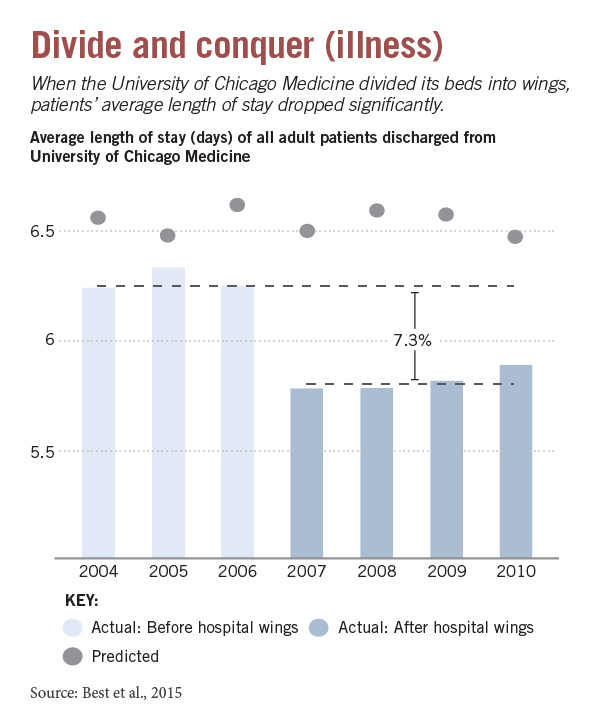 As building and equipping a single hospital bed can cost $1 million, simply building more beds and hospitals is not a practical solution. Rather, strained hospitals have to use their existing resources more wisely.

Many hospitals seek to do this by using care wings, which are like minihospitals dedicated to specialties such as cancer treatment, cardiology, or elective procedures. Using a wing, a hospital can better coordinate doctors, nurses, and specialized equipment and supplies. “The more a wing specializes, the more a hospital can take advantages of focused care; quality, costs, and lengths-of-stay may all improve,” write Thomas J. Best, the manager of research and analytics at the Center for Health and the Social Sciences at the University of Chicago, and David O. Meltzer, who directs the center, along with Chicago Booth’s Burhaneddin Sandikçi. and Donald D. Eisenstein. On the other hand, having wings can make it harder for a hospital to pool resources to address a rush of patients whose conditions don’t fit neatly into the dedicated care groups.

The researchers formulated a model to help hospitals weigh those trade-offs and decide how and when to form wings. The model could help an administrator trying to determine how many wings to form, what kinds to form, and how many beds to put in each wing.

It may also help hospitals trying to determine which patients should receive priority in admissions. At UCM, before it created dedicated care wings, general-medicine patients at times occupied almost a third of the hospital beds, the researchers recount. This delayed procedures for other patients, including those with impending surgeries. The high percentage of general-medicine patients also hurt the hospital financially, as many of those patients were covered by public insurance. “Forming strict wings is a way to make admit decisions in a purposeful and consistent manner, rather than leaving these decisions to chance or political maneuvering,” write Best, Sandikçi, Eisenstein, and Meltzer.

But although dividing the hospital into wings can increase quality and bring operational advantages, it can initially reduce bed occupancy, and fail to help at hospitals that have a high number of patients in the ER who can’t wait for treatment. Most controversially, it can lead to disparities that give some patients better access to medical services than others. Patients with conditions that don’t belong within one of the designated wings can lose access. “This is why it is important to think of a more holistic, or networked, solution—where one hospital may specialize in some care areas, while another nearby hospital specializes in others,” Eisenstein says.

3. Discharge patients in the morning

When a patient arrives at the ER, there are good reasons to move her to an inpatient ward as quickly as possible. Patients who wait more than six hours to be transferred are more likely to have longer hospital stays and higher mortality rates, plus they fill chairs and beds that could go to incoming patients.

A team of researchers has devised a model that they say could help hospitals reduce those wait times, also known as emergency-department boarding times—especially the long waits experienced by people who arrive in the morning.

Many patients are stuck waiting in ERs because of a timing mismatch, say the researchers—Purdue’s Pengyi Shi, National University of Singapore’s Mabel C. Chou and Joe Sim, Cornell’s J. G. Dai, and Ding Ding of the University of International Business and Economics. Hospitals discharge many patients in the afternoon, after doctors and nurses have carried out their morning rounds. That means if you arrive in the morning needing a hospital bed, you may have to wait until afternoon for a bed to become available.

The researchers found that at the National University Hospital in Singapore, while the average wait to be moved from the ER to a ward was 169 minutes, it was four hours for patients who arrived between 7 and 10 a.m. And of those patients, almost a third had to wait six hours or longer.

The researchers created a model that captures the flow of patients on an hourly basis, which they say is crucial to addressing the problem. The theoretical model indicates that it would be ideal to discharge patients as early as 8 a.m., though the researchers admit this can often be impractical. That said, “we believe it can serve as a goal for hospital managers to aim at if they intend to eliminate excessively long waiting times for morning bed requests,” they write.

They suggest that their model could be developed into a decision-support system that would help hospital managers evaluate the costs and benefits of implementing any operational and strategic policies—such as expanding the use of intermediate care facilities, or moving patients to different wards—that could affect ER wait times.

One of the best ways for a hospital to save money is to make sure that when a patient leaves, she doesn’t come back. Hospital readmissions cost $15 billion annually, and $12 billion of that cost is potentially preventable, according to research. A 2008 report to the US Congress put the fraction of Medicare patients readmitted within 30 days at 17 percent.

Hospitals have been looking for ways to reduce readmissions. Some use online readmission risk calculators to help predict the likelihood that patients will return. But “despite their benefits, these calculators have serious limitations,” according to a team of researchers—Indiana University’s Jonathan E. Helm, Jon M. Stauffer, and Kurt M. Bretthauer, as well as Adel Alaeddini of the University of Texas at San Antonio and University of Michigan’s Ted A. Skolarus. Among the limitations, the calculators don’t indicate how a hospital might use its estimates to make better care decisions, say the researchers, who created an approach that they say addresses those limitations, and those of other methods.

The approach, designed with clinical, statistical, and operations-management techniques, combines two methods of reducing readmissions. First, it seeks to predict an individual’s risk of returning, using data about a patient’s demographics, health history, and hospital stay. The researchers want to determine the likelihood that a patient could be readmitted, and more importantly, when that readmission is most likely to occur. With their approach, they also seek to create a personalized follow-up schedule for each patient. If medical providers know the best time to check on a patient after she leaves the hospital, they can design schedules and allocate staff accordingly.