US companies are currently keeping more than $2 trillion overseas—that’s $200 billion more than they keep on hand domestically. Getting this money back into the country and invested into American companies is something the government would very much like to see. US tax policy allows companies based in the country to defer any tax obligation on money earned overseas until it is returned to American soil, or repatriated, so keeping those monies out of the country has its advantages.

This week, the IGM Forum panelists considered two different tax changes that might help bring this treasure trove back home in the form of corporate investment. Unfortunately, these experts, some of the nation’s most respected economists, don’t seem to have much faith in that happening. 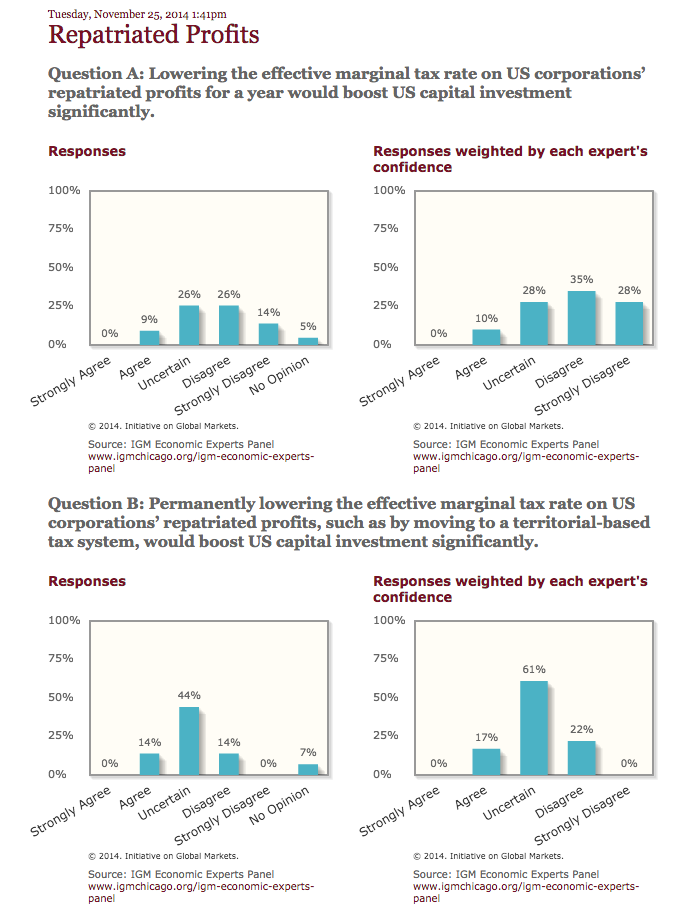 When considering whether lowering the tax rate on repatriated profits for a year would boost US capital investment, 40 percent did not think it would create any significant change. “There’s already $1 trillion sitting domestically on corporate balance sheets not being invested. How would a tax cut to bring back even more help?” asked Chicago Booth’s Austan Goolsbee. Stanford’s Kenneth Judd took a similarly dim view with his disagree vote by noting, “A temporary change would produce far more investment in accounting methods for exploiting this than in real capital.”

More than a quarter of the panel offered up uncertain votes, but most were made with a negative spin. “The effects are hard to predict. US corporations might simply repatriate the profits and increase dividends or buy back shares,” said Oliver Hart of Harvard. Only four panelists believed the one-year tax change would improve investment.

The economists next reflected on whether permanently lowering the tax rate on repatriated profits would create more investment here. Half of the respondents simply couldn’t say. “This would also divert investment abroad in a distortionary fashion, lower corporate taxes would be more powerful,” said Daron Acemolgu of MIT, while Chicago Booth’s Richard Thaler got straight to the point by writing, “I don’t see why this would happen.”

Of the remaining 28 percent of the group that chose to vote, they were evenly divided between those who believe the permanent tax change would increase investment and those who did not. But even among those who thought it would make a difference, there was not a lot of support. “Even better would be to have no corporate income tax and to have a sufficiently progressive consumption tax, but that’s wishful thinking,” Larry Samuelson of Yale observed with his agree vote.

Clearly getting that wealth of cash invested back in the United States is going to be a goal of the new Republican-led Congress, but a more creative approach will be needed. After all, if this many of the nation’s experts don’t think changing the tax rate on repatriated funds will make a difference, chances are it won’t.