On Tuesday, Massachusetts approved $3.25 million in tax breaks for Amazon to encourage the internet behemoth to go ahead with plans to build a one-million-square-foot shipping facility in Freetown. The building, the company says, will cost $50 million and will provide 500 permanent jobs.

Such tax breaks are common across the United States as local governments try to tempt businesses to settle in their borders. But are these tax incentives worthwhile? This week, the IGM Economic Experts Panel considers the costs and benefits of states and cities competing with each other for firms.

Giving tax incentives to specific firms to locate operations in a city or state typically generates local benefits that outweigh the costs to the city and/or state providing the incentives.

Nearly half of the panelists were undecided on the validity of this statement. “I don’t see how anyone can have an opinion on this without data,” said Chicago Booth’s Richard Thaler. “A $1 tax break is worth it. $100 billion not.”

But a quarter of the academics agreed that there are local benefits to tax incentives. “If it’s done carefully—the firms can’t get the tax benefits and then leave—this can pay off for a city or state,” said Harvard’s Oliver Hart. The remainder of panelists who voted disagreed. “Benefits are wildly exaggerated in the popular press,” said Yale’s Larry Samuelson.

The US as a whole benefits when cities or states compete with each other by giving tax incentives to firms to relocate operations in their jurisdictions.

A quarter of the participants were uncertain about whether local competition has benefits at the national level. “On its face, this sort of competition is useful,” said Stanford’s Darrell Duffie. “I can imagine that experts on this issue may suggest some unintended related distortions,” he said. Meanwhile, MIT’s David Autor addressed the politics of these programs. “I would agree if I were certain that governors had their states’ long-term interest in mind when cutting deals. Not sure that’s true,” he said.

Five percent of the participants said they agreed, but didn’t elaborate. But a vocal half of the group thinks competition among states and cities is not beneficial to the whole. “This is almost entirely zero sum,” said Chicago Booth’s Anil Kashyap, “with the companies gaining and the taxpayers losing.”

Ultimately, we need to crunch the numbers. Perhaps a good one to watch would be the new shipping plant in Freetown. If the facility is built and stays open, the city is slated to receive $1 million a year once the company’s 15-year tax-increment financing deal expires. 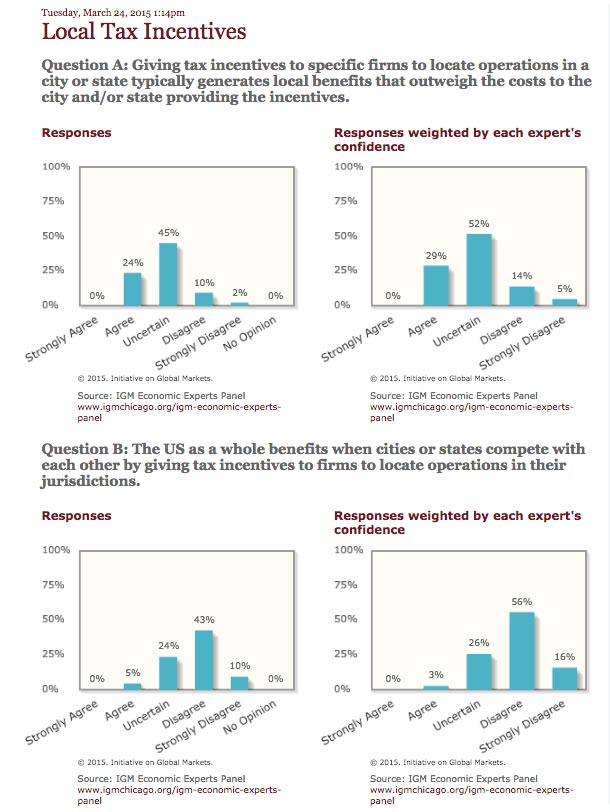