Why Women Find It Harder to Get Math-Based Jobs

Research suggests that both male and female employers are more reluctant to hire women for math-related positions.

Larry Summers caused waves when, as president of Harvard, he made a 2005 speech about why men still significantly outnumber women in STEM (science, technology, engineering, and math) careers. Summers controversially suggested that innate differences between men and women might explain the trend, but also posited that the gender disparity could be cause by different career preferences or discrimination.

Research by Chicago Booth Professor Luigi Zingales suggests that discrimination may indeed be a culprit, since both male and female employers are more reluctant to hire women for math-related positions.

Zingales, along with Ernesto Reuben of Columbia Business School and Paola Sapienza of the Kellogg School of Management at Northwestern University, designed a series of laboratory experiments to measure how potential employers respond to female applicants when hiring for a job that involves arithmetic.

In each experiment, researchers asked 45 male and female subjects to add up as many sets of four two-digit numbers as possible in four minutes. This task was specifically chosen because there is strong evidence that men and women perform it equally well. Subsequently, the researchers designated two subjects from the group, one male and one female, as potential job candidates. They made the rest potential employers, who conducted face-to-face interviews with the two candidates. 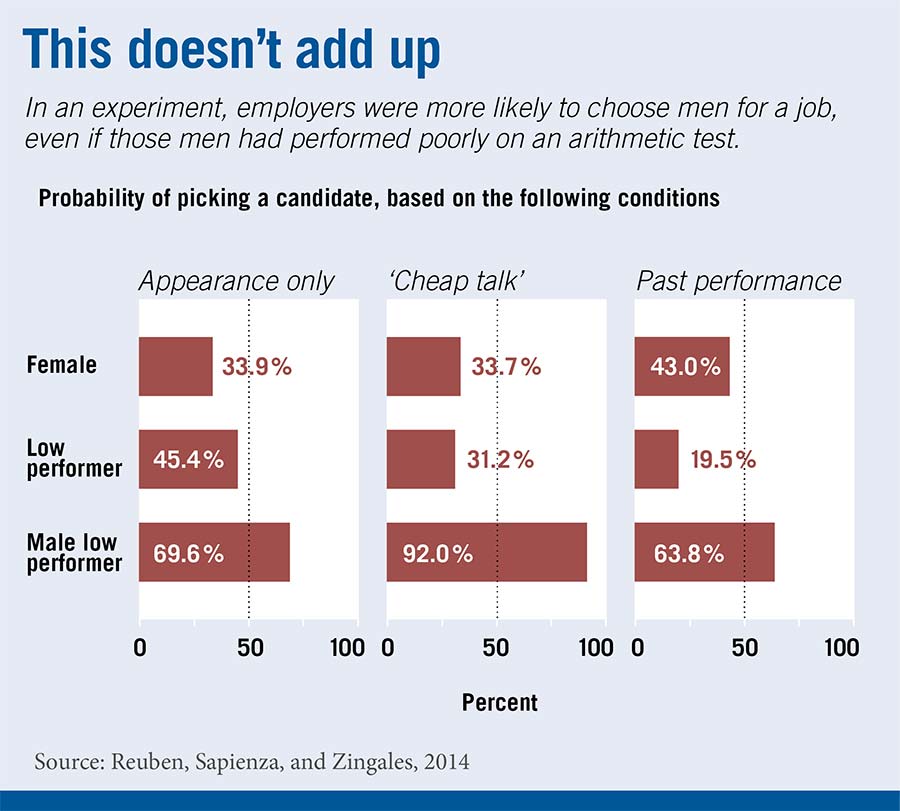 Under one condition of the experiment, potential employers were in the same room as the candidates and simply observed them. Zingales and his collaborators found that male and female employers were twice as likely to hire a man than a woman when the only factor they observed was physical appearance.

The findings suggest that discrimination is an integral reason for the low numbers of women in STEM careers. If the evidence holds outside the lab as well, it implies that real-world employers may often be choosing less-qualified male candidates over more-qualified female ones, and women may be losing their chances to pursue STEM careers because of hiring biases.

According to the study, hiring less-qualified candidates is strongly associated with gender bias. If hiring decisions were gender neutral, the fraction of times that a lower-performing man was hired over a higher-performing woman would be 50%. But the experiments showed that bad decisions in favor of a male candidate occurred 14% more often than bad decisions in favor of a female candidate, regardless of the scenario. Hiring less-qualified candidates leads to costly consequences for the companies involved, the researchers say.

But the cost to women is even greater. In the condition in which potential employers knew only the gender of the candidate, the expected earnings of the female candidates were 19.4% less than those of their male counterparts.

Perhaps the researchers' most important finding is that both men and women discriminate against women without realizing they are doing so. All participants took a computer-based implicit association test in which they rapidly placed into categories words and pictures they observed on the screen. The speed with which the test was completed, often less than a second for a pairing, revealed participants' implicit, often subconscious thoughts.

According to the researchers, the findings suggest that new antidiscrimination policies need to be designed and implemented to change what turns out to be unconscious behavior.