Why Some Companies Are Re-embracing Vertical Integration

Energy giants once managed production from oil fields to gas pumps. Coke and Pepsi mixed their drinks and distributed them, and carmakers turned ore into autos. While corporate strategists now urge focusing on core competencies and outsourcing the rest, there are still benefits to owning businesses up and down a production chain. Research by Enghin Atalay of the University of Wisconsin at Madison, University of Chicago’s Mary Jialin Li and Ali Hortaçsu, and Chicago Booth’s Chad Syverson seeks to measure the size of these benefits.

Vertical integration can help a company save money, retain control, and reduce risk, depending on the setting, but these effects can be difficult to measure. This is in part because the benefits of trading goods and services among sister units of one parent company rather than with a third-party customer are by their very nature derived from “non-market transactions and . . . costs that aren’t paid,” the researchers write. Avoided legal fees and increased employee know-how, for example, just don't wind up on an income statement or balance sheet.

To the extent that these data can be gathered at all, a thorough investigation requires that a company open its records for granular analysis. Even if a company were willing to do this, scaling up lessons learned to a wider market could be difficult. 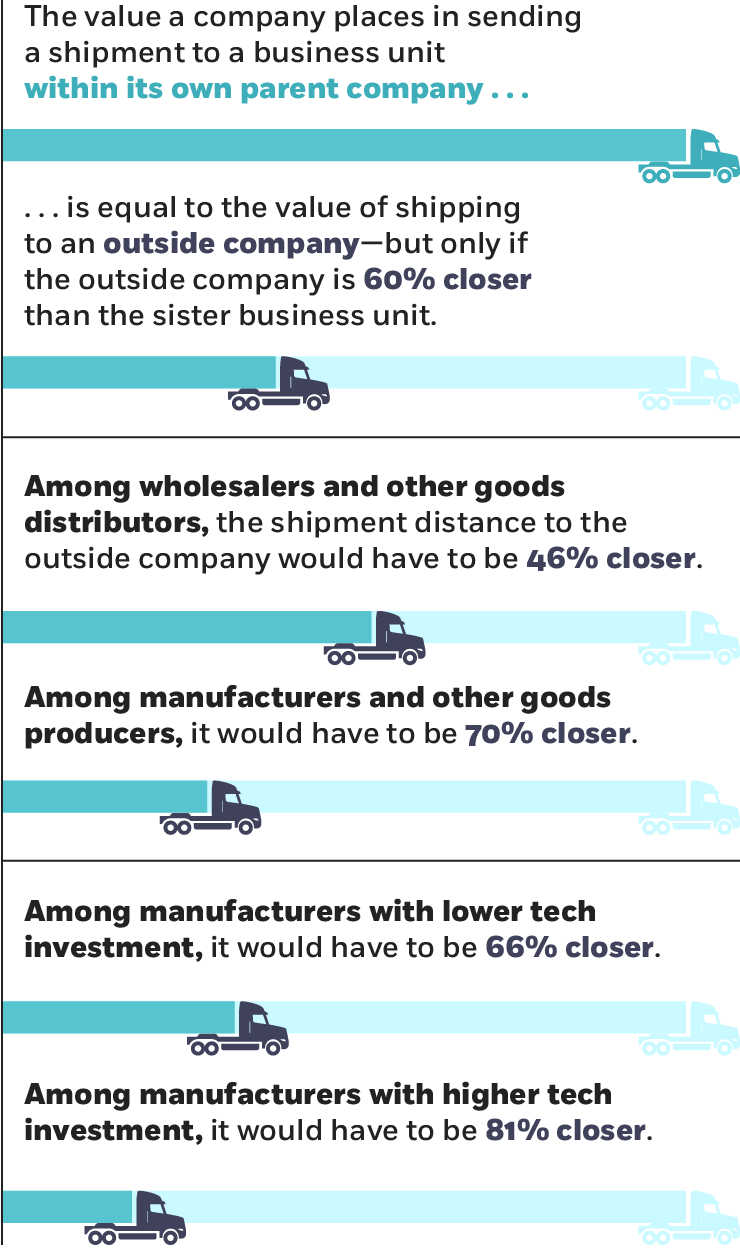 Among wholesalers and other goods distributers, the shipment distance to the outside company would have to be 46% closer.

Among manufacturers and other goods producers, it would have to be 70% closer.

Among manufacturers with lower tech investment, it would have to be 66% closer.

Among manufacturers with higher tech investment, it would have to be 81% closer.

The researchers skirted these challenges by analyzing a US Census Bureau survey of shipments made by 35,000 multiunit companies in 2007—about 4 million domestic transactions in all. They used companies’ decisions about what to ship and to whom as a proxy for the value of keeping a transaction in-house. Because physical distance has been shown to depress transaction volumes, a company’s willingness to send internal shipments far demonstrates that its managers believe they are making up for the distance-related costs by reaping in-house benefits, the researchers reason. Measure the differences in transaction volumes, and you can put a value on these benefits, they argue.

Crunching the data reveals that the advantages perceived by company managers are significant: when companies were able to trade in-house, they were willing to send shipments farther—100 miles to every 60 miles for transactions with independent partners.

How Stores Can Minimize Supply-Chain Blunders

Few retailers anticipate supplier errors in their formal inventory plans, and research suggests this could be costing them money.

How Stores Can Minimize Supply-Chain Blunders

How to Sell More Underwear

Hugo Boss had a problem. The German clothing maker advertised to the retail chains buying its clothing that certain bodywear products—socks, T-shirts, underwear—would never be out of stock. Sometimes, though, they were.

How to Sell More Underwear

These figures might add to explanations of why tech leaders such as Google and Tesla are bucking the trend away from vertical integration. The search-engine giant is moving into smartphone manufacturing, and the maker of Tesla electric cars is buying into solar-panel production with its purchase of SolarCity.

Atalay, Li, Hortaçsu, and Syverson do not single out specific companies, but they did calculate the aggregate impact on the economy of vertical integration. They argue that real wages would be 0.2 percent lower in an environment without the advantages of in-house transactions boosting overall trade. Moreover, they say they believe their calculation understates the benefits measured here, reflecting their previous research demonstrating that companies that own multiple parts of a production chain see these benefits as just one small argument in favor of vertical integration.