Why Do We Give?

While research is offering tips to help fund-raisers, people furthering the science of philanthropy are also addressing a more fundamental question: Why do people give?

There’s been a longtime debate in psychology about pure altruism: Do people act out of an urge to do good for others at a cost to the self? Or are motives more self-centered? Recent evidence suggests that many people give to others largely to gain a “warm glow”—that satisfied feeling that follows doing a good deed.

John A. List and Anya S. Samek, investigators at the University of Chicago’s Science of Philanthropy Initiative (SPI), have found that altruism seems to be innate in children. Through a study that had toddlers dole out marshmallows and cotton balls both to other children and to puppets, the researchers determined that altruism was the central motivator. “When you’re little, it hasn’t been ingrained that you should do for others to feel good,” says List. “But over time, that innate altruism fades, and warm glow takes over.”

Another study of List’s, with Yale’s Dean Karlan, suggests that warm glow is a central driver for giving in adults. When organizations offer to double or triple a donor’s gift, that offer produces no advantage over a one-to-one match, suggesting that people are giving more to feel good than to help out the greatest number of people.

The two theories of motivation aren’t mutually exclusive: a person initially giving to do good may realize that it also feels good to do so. University of California, San Diego’s James Andreoni, who coined the term warm glow, writes that, “while it is possible that warm-glow exists apart from altruism, it seems most likely that the two are complements—the stronger your desire to act unselfishly, the greater the personal satisfaction from doing so. Indeed, the two may be inextricably linked.”

Understanding that people may give for more “selfish” reasons can help charities tailor their strategies in more effective ways. They could, for example, ask donors to participate in three one-to-one matches rather than one three-to-one match. And they might mention to potential donors that a sense of “warmth” is a positive side effect of doing good.

People donate to boost their karma

Although most people will say they don’t believe in karma, their behavior tells a different story. Jane L. Risen, associate professor of behavioral science at Chicago Booth, and her collaborators found that when people feel that big events in their lives are fundamentally outside of their control rather than within it, they’re more likely to donate money to charity.

The research married two lines of work: one on magical thinking, whereby people hold beliefs that they know can’t logically be true, and the other on reciprocity, where people feel that good or bad deeds are generally returned in kind. The natural product of the two phenomena is karma.

Risen says she first noticed it when she was in graduate school, preparing for a big exam, and started to put money in a vending machine to buy a bottle of water. There was already money there, so she got the water for free, but she didn’t want to be in karmic debt with an exam coming. “Even though I don’t believe in these things, I put in another dollar, to pay it forward.”

Building on this logic, she and her coresearchers looked at how the notion of karma might affect a person’s likelihood to give to charity. In the research, people asked to reflect on an event out of their control, such as a medical test, were more likely to donate to charity compared to people asked to reflect on their daily routine. When the things that people want are out of their control, Risen says, focusing them on their individual desire can, ironically, make them more likely to do good for others. 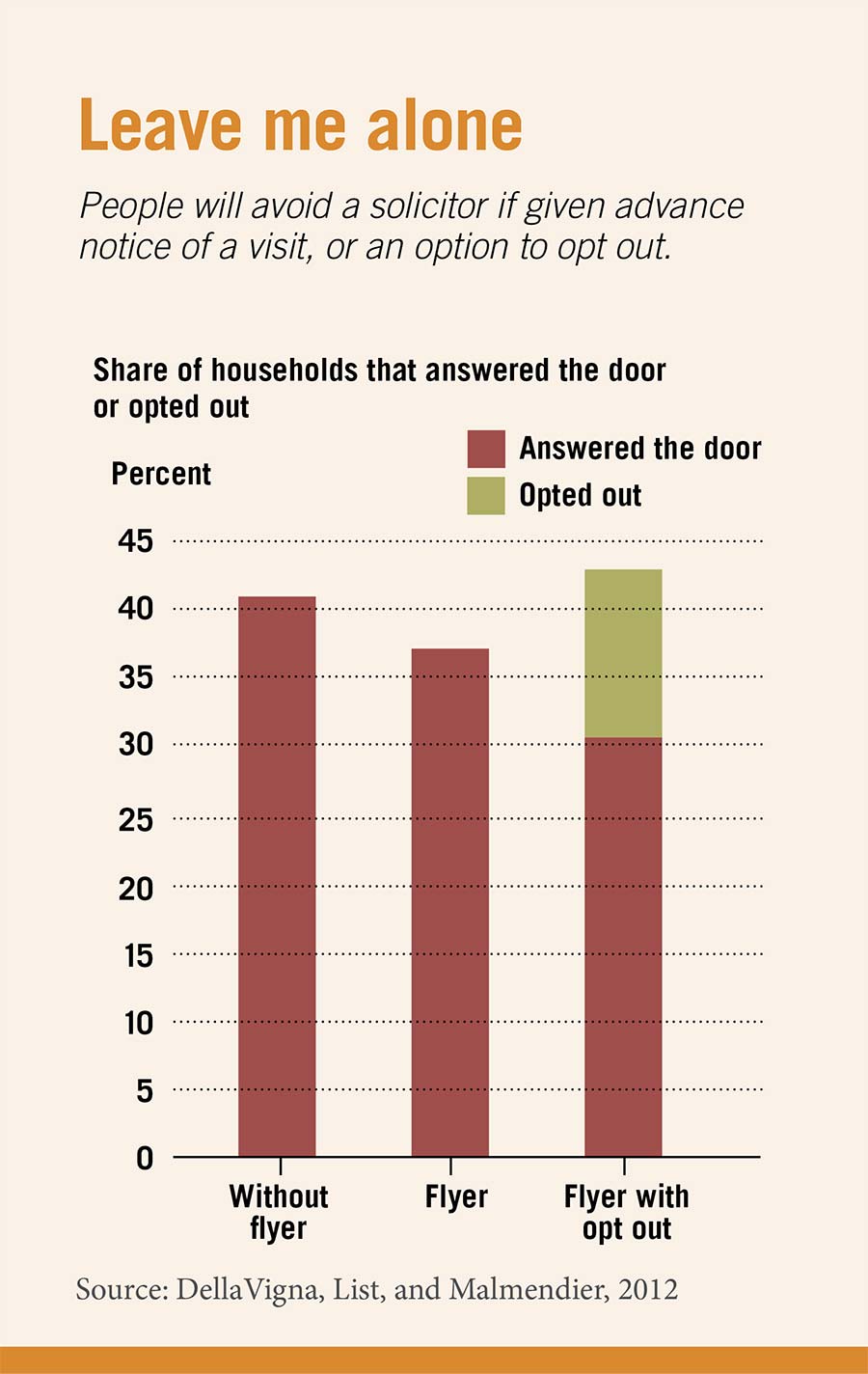 Human beings are deeply concerned with other people’s opinions, so social pressure is one of the most powerful motivators for giving, List says.

List and his collaborators, Stefano DellaVigna and Ulrike Malmendier at the University of California, Berkeley, hired solicitors to knock on people’s doors to ask for money for children’s charities, or hang fliers on people’s doors notifying them that a volunteer would be back at a particular time the following day to do so.

Forewarning people of the impending solicitation reduced donations by 10–25 percent, as some people took the opportunity to avoid a face-to-face meeting and the accompanying social pressure to give. Some of the fliers had a “do not disturb” box to check, and distributing those fliers reduced donations by 30 percent.

However, a study by SPI’s Samek found that when people approached in door-to-door solicitations were offered the option of sending a personal greeting card to the recipient of a donation, something likely to give them a feeling of warm glow, they were less likely to give. (This finding only applied to people giving small amounts.) This may be because when people are driven by social pressure alone, introducing the personal element turns them off, perhaps making them feel their donation is ineffective, or the transaction is less meaningful.

List says many studies and anecdotes show that people behave differently when watched. He adds that while social pressure does have its place, offering prospective donors the opportunity to opt out may be an important way to ensure their well-being.