Even as artificial intelligence crosses unlikely thresholds and spurs stock prices, it isn’t having a discernible effect on the economy. Measured productivity has been declining for more than a decade in the United States and abroad. It calls to mind Solow’s paradox, a 1987 observation by the Nobel laureate economist Robert Solow, who noted that one “can see the computer age everywhere but in the productivity statistics.”

It shouldn’t be a surprise that the same thing is happening with artificial intelligence, or AI, according to MIT’s Erik Brynjolfsson, MIT PhD candidate Daniel Rock, and Chicago Booth’s Chad Syverson. AI is a once-in-a-lifetime, general-purpose technology that promises to provide an “engine of growth,” they write. This was also true of the steam engine, electricity, and the internal combustion engine.

And yet, the researchers point out, the steam technologies that drove the US industrial revolution took nearly 50 years to show up in rising productivity statistics. And the first 25 years after the development of the electric motor and internal combustion engine were associated with a productivity slump, with growth of less than 1.5 percent a year. Then in 1915, the pace of economic expansion doubled for 10 years.

The shape of a measurement error
The researchers suggest that some investments in AI will take time to appear in measured productivity statistics. 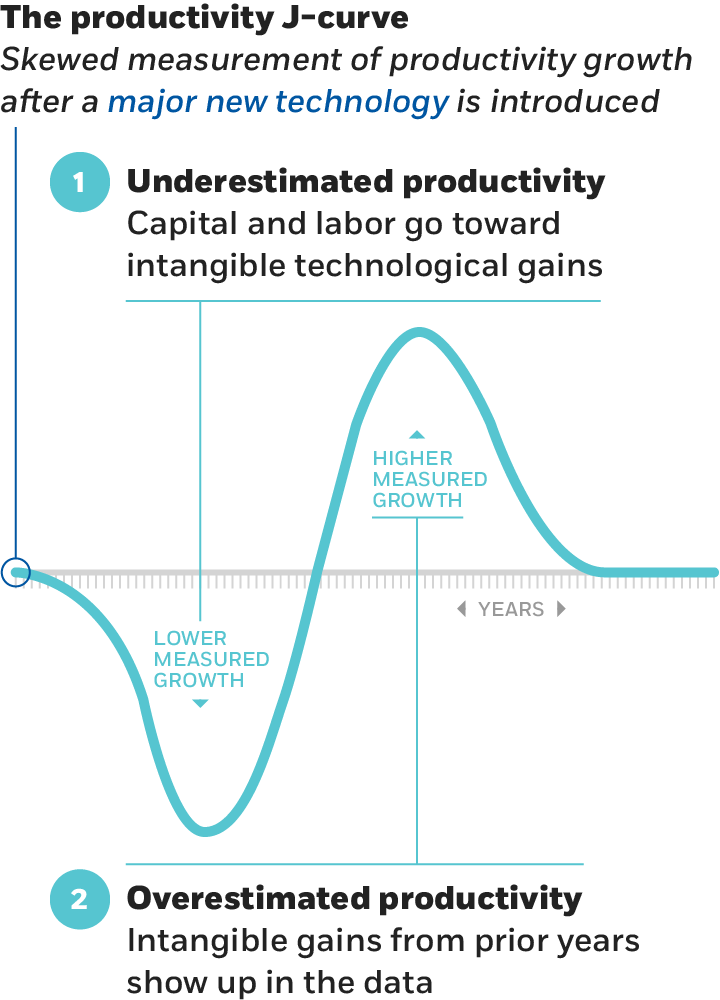 Why does this happen? It takes a while for businesses and workers to figure out how to harness innovative new technologies. It also requires investments in intangible developments, including “a fundamental rethinking of the organization of production itself,” the researchers find.

“Along with installing more easily measured items like physical equipment and structures capital, firms must create new business processes, develop managerial experience, train workers, patch software and build other intangibles,” the researchers write. The intangible investments associated with bringing out the potential of AI thus aren’t yet showing up in economic growth data, they argue.

Brynjolfsson, Rock, and Syverson developed a model, based on stock-market valuations that capture the magnitude of intangible investment value, to account for this measurement error. They used the model to estimate the value of intangible capital investments and demonstrate how their estimates can be used to infer more-accurate, timelier measures of total-factor-productivity growth.

Why Hasn’t Technology Sped Up Productivity?

Slow productivity growth is costly. There’s cause for hope.

Why Hasn’t Technology Sped Up Productivity?

The economy is early in the AI adoption wave, with start-up funding for AI having increased from $500 million in 2010 to $4 billion in 2016. According to the researchers, this implies intangible investments in AI may have accounted for 0.55 percent of “lost” output—or output that national productivity statistics didn’t measure—in 2017.

Brynjolfsson, Rock, and Syverson suggest that investments in AI are likely to grow rapidly and that the US economy may be entering a period when AI will have significant effects on estimates of productivity growth. An arrival of the benefits of intangible investments in AI over the coming decades would expectedly cause a productivity surge, the researchers find.