What Can Natural Disasters Teach Us about Economic Development?

On November 9, 1872, an alarm sounded in south central Boston. A fire had started in the basement of a commercial warehouse, and it consumed one building and quickly spread. By the time the fire was contained the following morning, it had claimed 20 lives and destroyed 776 buildings, wiping out 11 percent of the total assessed value of all Boston real estate and personal property. “Whole blocks were literally mowed down by the flames like wheat before the reaper’s scythe,” wrote the Boston Daily Globe, under the headline, “DEVASTATION!”

With damages that amounted to $75 million, this 19th-century fire represented a major disaster for the time. “If that many buildings were burned in a downtown urban area today, it would be enormous news, and perhaps even seen as more catastrophic than it was then,” says Chicago Booth’s Richard Hornbeck.

While the fire has faded into history, its aftermath contains lessons directly applicable to modern economic development. By studying Boston’s fire and other historic events, Hornbeck and his colleagues are observing what can help areas, poor or rich, grow and reach their economic potential. Destruction, it seems, can lead to progress—if conditions are right.

Economic development is big business in the United States, with federal, state, and local agencies all trying to promote investments, joint ventures, technology centers, and anything else that can boost jobs and development. Cities are epicenters of this development, and development case studies abound. The Initiative for a Competitive Inner City, a national nonprofit founded by Harvard’s Michael E. Porter, highlights some on its website, including the revitalization of San Francisco’s Tenderloin district.

Historic events offer a different, longer-term perspective on development. Boston, for example, highlights the power of collective action. In 1872, the city was full of post–Civil War merchants and entrepreneurs, whose work was on display in ads touting sewing machines, schools, and spectacles “highly recommended for Physicians and Scientific men.” While business was growing, many businesses were constrained—literally, by a lack of upgraded commercial space. Real-estate prices were rising, and building owners saw no pressing need to sink money into improvements. The clothiers, spectacle makers, and other business owners made do, at least until the fire inspired a mass redevelopment.

To understand and quantify the impact of the Boston fire, Hornbeck and Yale University’s Daniel Keniston used data from before and after the fire to create a model of Boston’s land and property values between 1867 and 1894. For each plot in or near the burned area, Hornbeck and Keniston collected and digitized city tax data that contained details such as land value, building value, size, owner name, and occupant characteristics. They also collected some real-estate-sales data. They find striking increases in land value in burned and nearby unburned areas—increases that were similar to, or moderately greater than, the actual value of buildings burned in the fire.

Red-hot real estate
In and around the area of Boston that burned, land values spiked in the following two decades. 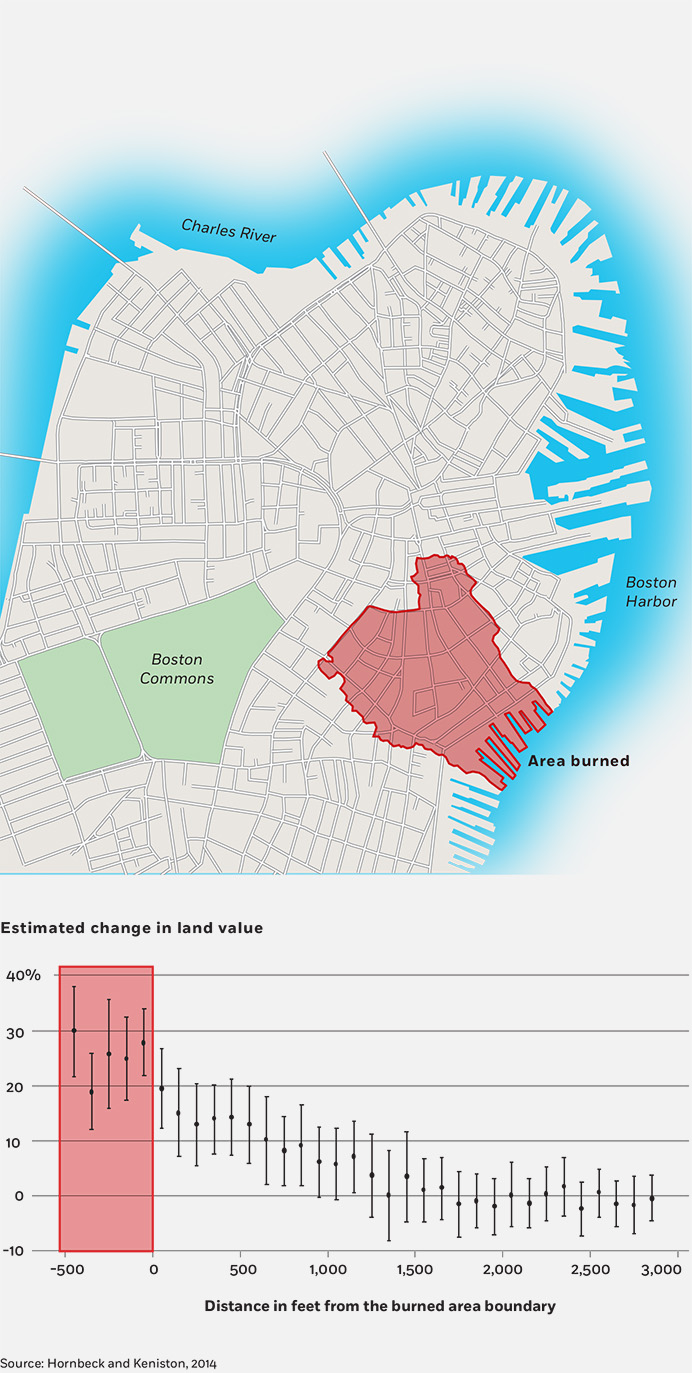 Landowners’ reaction to the fire drove these increases. Prior to the fire, a landowner who considered investing in upgrades may have been worried about seeing a return on his investment. After the fire, however, he had less reason to worry. The fire cleared a large area and forced many people to rebuild, with the private sector and insurance payouts funding reconstruction. And with many people constructing buildings at once, landowners willing to invest saw a stronger return on their investment than existed before.

It helped that developers replaced buildings that were destroyed with bigger, nicer, and ultimately more-valuable spaces. The Boston Evening Transcript admired the variety of marble, granite, and sandstone in the new construction, while Boston’s Advertiser commented on “a beauty and elegance combined with a thoroughness of construction which will substantiate Boston’s claim of possessing the finest architecture of any American city.”

Upgraded buildings were worth more, but the mass activity led land values to rise substantially too—in part because the new construction inspired other landowners, even in adjoining areas, to improve their own properties. “The reconstruction of buildings benefited other nearby buildings, which created a multiplier effect to the betterment of the overall area,” says Hornbeck. The effect lasted five to six blocks, and included hundreds of buildings.

By the time a national recession hit in force a few years later, Boston was once again thriving. And the data suggest that Boston’s prefire real-estate situation had been holding back economic growth. The fire released pent-up demand that had existed in the economy. As devastating as the disaster was, it made it possible for Boston to evolve into a city ready for the 20th century.

While the Boston fire presents one historical example to learn from, a flood a half-century later and 1,500 miles away presents another. From the 1927 flood of the Mississippi River delta, researchers see another example of an area’s trajectory influencing economic growth. In this case, the social, political, and legal systems of the area held back development.

In 1927, months of heavy rains pushed the Mississippi River to overwhelm the levee system that had been built to contain and tame what Mark Twain called the “lawless stream.” Water breached the levees in 145 places, spreading over 26,000 square miles of Louisiana, Mississippi, and Arkansas. Walls of rushing water swept away houses and towns, drowning animals and people. The flooding left hundreds of thousands of people homeless, destroyed 36 percent of farmland, and caused $400 million in property damage, more than $4 billion in today’s dollars. In the aftermath of the flood, banks failed, and many thousands of people were left impoverished. 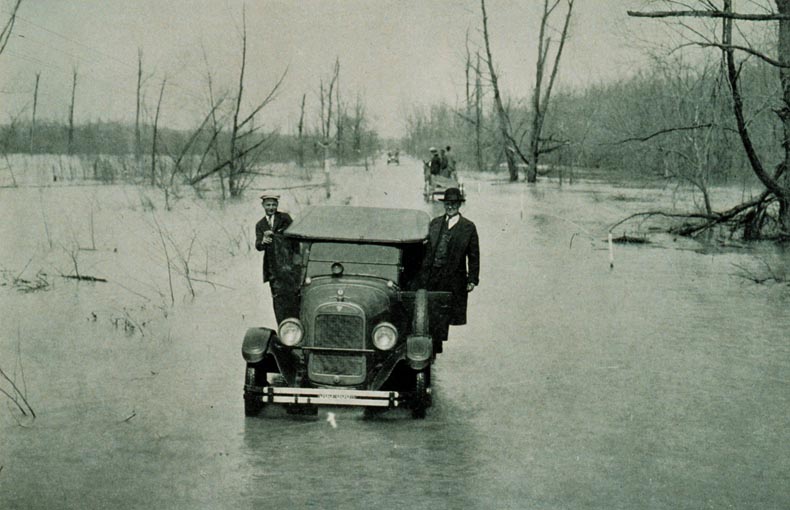 In 1927, the Mississippi River flooded 26,000 square miles of Louisiana, Mississippi, and Arkansas.

Hornbeck and Columbia University’s Suresh Naidu use data from the time to home in on a factor that had been constraining economic growth in the southern delta: white landowners’ reluctance to mechanize. That reluctance was tied in to the availability of low-paid, mostly black workers.

In the delta, white plantation owners had crafted a system that gave them a strong incentive to cling to their old ways. After slavery was abolished in the US in 1865, many white landowners with political influence in the region continued to employ black families and workers as low-paid sharecroppers. Blacks, restricted by a lack of literacy and civil rights, remained cheap labor.

As the Mississippi’s waters rose, the white delta landowners fought to keep black workers in place. As historian John M. Barry recounts in Rising Tide: The Great Mississippi Flood of 1927 and How It Changed America, landowners worked aggressively to prevent blacks from leaving the area. Concerned about losing their workforce, the landowners enlisted  armed troops to round up many blacks and force them into substandard camps that were practically prisons. Across the southern US, blacks were made to work for no pay, were fed inferior food, and in some cases were whipped or killed.

Despite the attempts to keep them from leaving, many black workers did move north. “Flooded areas lost black population due to the combined effects from temporary displacement and a decline in the opportunity cost of migration, a breakdown of trust between planters and black workers, and a shift in black social networks toward favoring migration,” Hornbeck and Naidu write.

In the delta, planters did adapt and mechanize when black workers moved. In counties that experienced flooding, the black population fell 14 percent between 1920 and 1930, according to the data. In flooded areas, the value of farm equipment and machinery increased substantially between 1927 and 1940, more than it did on nonflooded farms. “Relative increases in agricultural capital continued through 1970,” write the researchers, who analyzed data through that year. But the money they invested in farm equipment took a while to translate into profits. In flooded areas, property values didn’t grow significantly until the 1940s and 1950s.

Bostonians’ collective action helped boost their economy. In the delta, however, landowners coordinated efforts to stave off progress. “Landowners in Boston benefited when others reconstructed buildings, whereas farmers in the delta didn’t benefit much from the mechanization of other farmers,” says Hornbeck. In retrospect, the economic aftermath of the two disasters looks very different.

Research into redevelopment commonly looks at urban-renewal projects in poor areas, where outside incentives are needed to jump-start projects. For example, Vanderbilt’s William J. Collins and Washington and Lee University’s Katharine L. Shester studied the effect of Title I of the US Housing Act of 1949, a federal program that supported 2,100 urban-renewal projects—many of which involved clearing and selling land in areas considered blighted.

But the examples provided by Boston and the Mississippi delta highlight the importance of an area’s underlying economic trajectory, which can be heavily influenced by its political, legal, or social situation. These episodes provide a way to look at larger forces that drive development. “You learn a lot about a society through its reaction after a disaster,” says Hornbeck.

The findings suggest that city planners and developers trying to kick-start growth need to identify the forces that are shaping an area and defining its trajectory. Planners should focus on identifying and removing any constraints, which could include regulations, politics, culture, or the environment. In Dust Bowl–era Oklahoma, another period Hornbeck has studied, few people sought to adapt to drought and erosion, despite government intervention programs. The area experienced large and permanent declines in land values. 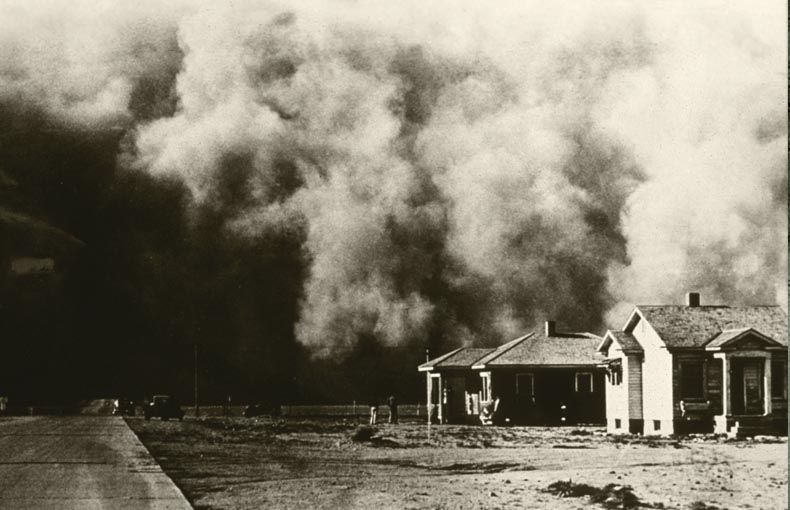 In Oklahoma, few people sought to adapt to drought and erosion, despite government intervention programs.

The historical examples further teach us about the importance of coordination. In Boston, the fire inspired collective action, but cities seeking to clear land for redevelopment are sometimes stymied by a small number of people who don’t want to move and can hold up the process of redevelopment, says David Albouy, of the University of Illinois. “It’s hard to get all the relevant actors moving at the same time,” he says.

Albouy, who studies urban economics, says that today’s prime urban areas face constraints remarkably similar to those of 19th-century Boston. In cities across the globe, high housing prices are making it difficult for people to work in and contribute to the local economies. A shortage of affordable office space can cost a city jobs. Big construction projects run into opposition and strict land-use regulations. Much of this is true even for modern Boston. “Boston needs to rebuild parts of its downtown core,” Albouy says, adding that the entire country would benefit if Boston revisited its strict rules about which buildings are worth preserving.

Change can be painful, even when lives aren’t at stake. But when conditions are right for growth, the research suggests, painful destruction can give way to development and progress.