The president is unlikely to achieve any of his objectives.

President Donald J. Trump has long believed that other countries have been taking advantage of the United States, treating it unfairly in trade. The consequence, in his view, has been large trade deficits, massive job losses in manufacturing, and the destruction of the middle class. He sees pacts such as the North American Free Trade Agreement as badly negotiated and disastrous, and he has pledged that his administration will begin to undo the damage.

As a result, Trump has unleashed a dizzying array of policies. He pulled the US out of the Trans-Pacific Partnership (TPP) and has been renegotiating NAFTA, under his threat of terminating the agreement. He has imposed stiff tariffs—under the guise of national security—on imports of steel and aluminum, raising costs to domestic steel-using manufacturers and drawing foreign reprisals against US exports. He also slapped duties on imports from China in retaliation for unfair trade practices that include intellectual-property theft and so-called forced-technology-transfer policies that pressure companies to share their technology in order to do business in China.

Yet for all the Sturm und Drang of his trade policy, the president is likely to end up being terribly disappointed by the results of his efforts. He wants to reduce the trade deficit, create new manufacturing jobs, enhance national economic security, and force China to change its policies. He is unlikely to achieve any of these objectives. In the end, his policies will likely be an exercise in frustration. Unfortunately, there could be a lot of collateral damage done along the way.

President Trump wants to reduce the US trade deficit, wherein we import more from other countries than we export to them. As a businessman, he views the deficit as a bad thing because, after all, if a company’s expenses are greater than its revenues, it is losing money and will fold. If other countries sell more to us than we sell to them, the logic goes, we are losers and they are winners.

Understanding the causes of a trade deficit is important in designing policies that could reduce it—if that is the objective.

If we import $100 more than we export, the US isn’t “losing money”; that $100 will come back to the US to buy some asset here. The flip side of a trade deficit is the fact that the US is a net recipient of capital from the rest of the world—through purchases of government debt or a company’s stock, or new direct investments (such as building a factory). These asset transactions are driven partly by the higher rate of return in the US, and partly by the fact that dollar-denominated assets are viewed as safe.

These trade and asset balances are driven by macroeconomic factors, not tariff levels or market openness. In particular, if a country has a high savings rate relative to investment, that country will have a trade surplus because it will send some of its excess savings to other countries. That is why countries such as China, Japan, and Germany—all with high savings rates—have trade surpluses. And the US has deficits because it is a low-savings, high-consumption country that draws in capital from the rest of the world.

Trade policy by tweet
President Donald J. Trump complains about barriers, including Canada’s dairy tariffs, but misses opportunities to reduce them and open foreign markets to US exports. 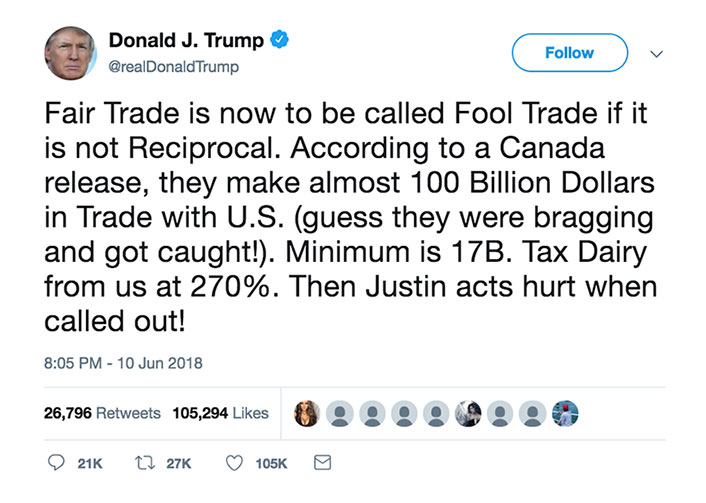 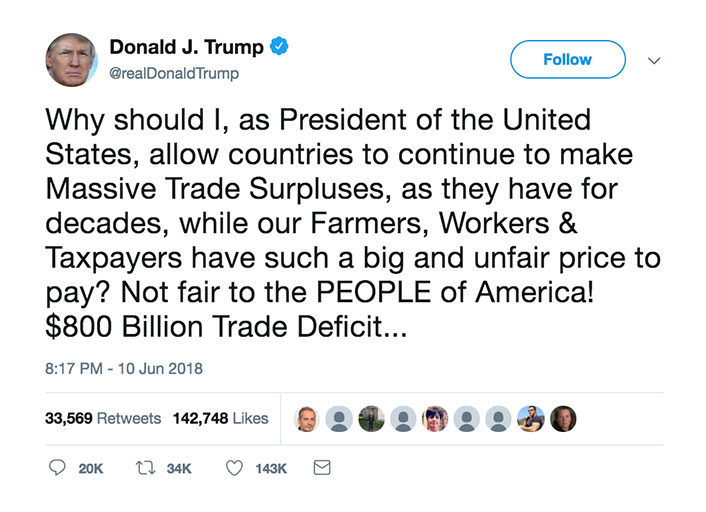 If the goal is to reduce the trade deficit—and it is not at all obvious that this should be a national priority—the implication is that the government should encourage national savings, not consumption. One way to do this would be to reduce the fiscal deficit, particularly at a time when the economy is doing well.

It seems to make sense that when the US imports steel and automobiles that it could have produced at home, it is losing jobs in the process. Isn’t it reasonable then to assume that reducing imports through higher tariffs will create manufacturing jobs?

This logic ignores the fact that the US also exports a lot of manufactured goods. If we reduce our imports and other countries follow by reducing our exports to them, we won’t gain any jobs as a result.

More importantly, imports have not been the major factor behind the loss of manufacturing jobs. The main culprit is technology. Automation and other technologies have enabled vast productivity and efficiency improvements, but they have also made many blue-collar jobs obsolete. One study, by the Center for Business and Economic Research at Ball State University, finds that productivity growth accounted for more than 85 percent of the job loss in manufacturing between 2000 and 2010. Just 13 percent of the overall job loss resulted from trade, although it accounted for 40 percent in the apparel and furniture sectors.

Tariffs will also be ineffective in bringing those jobs back. Take the steel tariffs. In the 1980s, it took 10 worker-hours to produce a ton of steel; now it takes fewer than two worker hours. Boosting steel output will not create jobs as it would have in the past, and job creation in the steel industry would not be for blue-collar workers in the forges but for technicians and engineers monitoring the modern equipment.

Furthermore, there are adverse downstream impacts. While there are 140,000 steel workers, steel-consuming industries employ 6.5 million workers. When US-based manufacturers face higher domestic steel prices, many more downstream jobs are jeopardized since they cannot pass these higher costs to consumers. Machinery producers Caterpillar and John Deere, to say nothing of US automobile manufacturers, purchase large amounts of steel, and they cannot remain competitive against foreign-based producers that get steel at lower prices. We’ve seen this movie before: in 2002, President George W. Bush imposed steel tariffs, and as many as 200,000 jobs were lost in steel-consuming industries, according to one study, by University of Bern’s Joseph Francois and Laura M. Baughman of the Trade Partnership and Trade Partnership Worldwide. In fact, the motorcycle manufacturer Harley-Davidson recently announced that it will be increasing production abroad for two reasons: higher steel costs in the US and foreign retaliatory duties (in response to the steel tariffs) that have targeted American-made motorcycles.

The Trump administration’s steel and aluminum tariffs were imposed under an obscure provision of US trade law, Section 232 of the Trade Expansion Act of 1962. This Cold War–era provision was designed to ensure that we were not dependent on Communist adversaries for essential supplies. Trump’s 25 percent steel tariffs—imposed on countries such as Canada, Mexico, Japan, and those in the European Union—will mainly hit not enemies but friends, many of which have military alliances or security relationships with the US. The US brings in relatively little steel from Russia or China, partly because these imports already have been reduced via antidumping duties.

Unfortunately, the administration’s destructive approach to trade has alienated allies, which makes them less likely to work with the US on trade issues.

In fact, it is widely recognized that there was no national-security rationale for the steel tariffs, since imports were not surging into the US; the share of imports in the domestic market has been relatively stable for many years. Rather, the administration, particularly Secretary of Commerce Wilbur Ross, a former steel executive, simply wanted to help the industry with trade protection. The national-security statute was invoked simply because it was the easiest, least reviewable method for the administration to impose tariffs.

Unfortunately, this flimsy rationale for imposing tariffs opens the door to other countries invoking national security to interfere with US trade as well. Furthermore, these new tariffs have not only frayed US relations with its allies, destabilizing the US security relationship; the countries are also retaliating against US exports. Thus, the steel tariffs have indirectly hit some exporters and are costing manufacturing jobs and reducing farm income.

The Trump administration has a legitimate gripe against China for its interventionist policies, which reserve big parts of its market for domestic producers and require local joint-venture partners, and for nontransparent regulations that adversely affect foreign firms.

The question is what to do about it. China is a member of the World Trade Organization, and when it violates explicit agreements, it should be punished. Rather than imposing unilateral trade sanctions, the US should work with a coalition of allies to build a strong multilateral case against China; the more leverage the world has against China, the more likely the outcome will be satisfactory. Unfortunately, the administration’s destructive approach to trade has alienated allies, which makes them less likely to work with the US on trade issues.

What the administration should not do but has been tempted to do is simply reach an agreement for China to buy more US goods. This may reduce the bilateral trade deficit, but it will do nothing to address the structural problems facing foreign firms in China. Furthermore, the additional purchases from the US will come at the expense of other countries, which will resent how the US has used its power.

The Trump administration wants to achieve many things in trade: a lower trade deficit, more manufacturing jobs, greater national security, and a different trade strategy with China. Yet its approach is likely to lead to the opposite: a larger trade deficit, fewer jobs (but more disrupted supply chains), and weakened national security as other allies question whether the US is a reliable partner. The result is increased protectionism at home and abroad, and retaliation against US exports along with it. And by rejecting trade agreements such as the TPP, the administration has missed an opportunity to reduce foreign-trade barriers and open up those markets to US exports.

Douglas A. Irwin is the John French Professor of Economics at Dartmouth College. This essay is based on a policy note presented at the 2018 Asian Monetary Policy Forum. Irwin taught on the Booth faculty from 1991 to 1997 and returned again in the Fall 2017 Quarter. His most recent book is Clashing over Commerce: A History of US Trade Policy, University of Chicago Press, copyright 2017.