More than one-third of all food produced in the world is wasted, according to the United Nations. In industrialized countries, retailers and consumers throw out 300 million metric tons of perfectly fine food per year—enough to feed the estimated 900 million people who are going hungry. The UN, United States, and European Union have set a goal to halve food waste by 2030, and to meet that, some countries including the US are running public-service or education campaigns to encourage people to waste less food.

Much of the guidance is targeted at consumers. The UN, for example, advises people to plan meals, eat the food already in their fridges before buying more, and compost food scraps. But research by Chicago Booth’s Elena Belavina suggests policy makers should focus less on consumer advice and more on urban planning. Her research finds that many cities could significantly reduce food waste by increasing grocery store density.

Belavina looked at the number of stores in a given market area and built a model that weighs the effects of store density on consumers and retailers. On the consumer side, higher store density leads to lower consumer food waste, she finds. When stores are closer to each other, they’re also closer and more accessible to shoppers, which means people go shopping more often and buy less on each visit.

Food waste in Chicago
In Chicago, the optimal number of food retailers per 10 square kilometers is 195; the current number is 15. 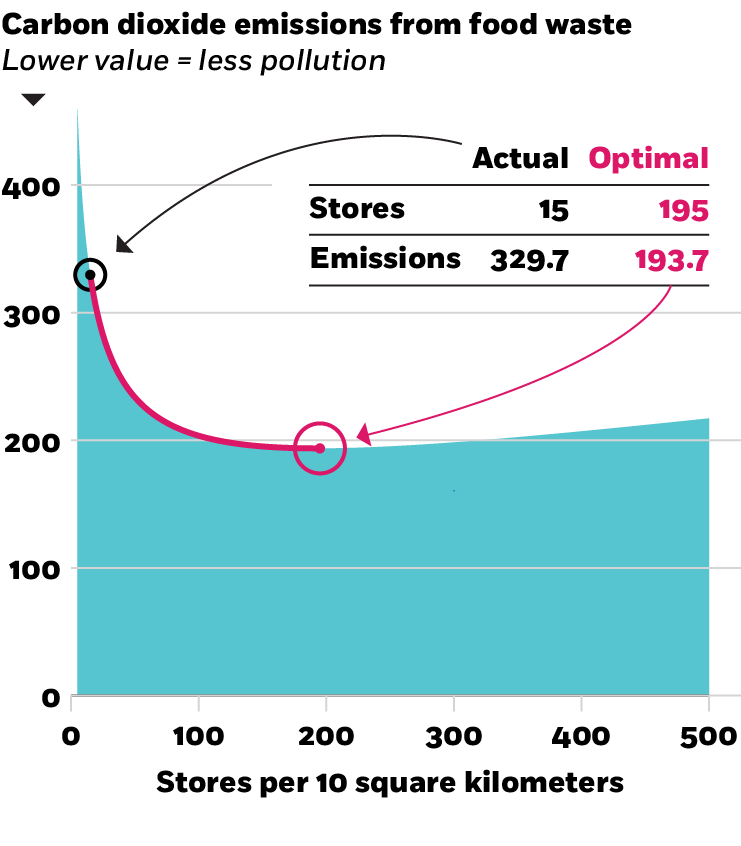 However, higher store density also leads to more retail food waste. When customers waste less, they buy less. Meanwhile, each store serves a smaller area and carries inventory, which is less efficient than a system that involves more centralized inventory. Demand is also more irregular and variable, Belavina says, as shoppers who stock up return to stores on a more predictable basis than shoppers with less in their baskets. The end result: stores end up with leftover inventory, which becomes waste.

Belavina creates a model that weighs the competing effects and countereffects. Consider, for example, that when there are more stores in an area, there’s more competition, which leads to lower prices. “This increases consumer waste as consumers waste more of the cheaper groceries,” she writes. “This higher consumer waste translates into higher market demand, which decreases retail waste on account of the smaller safety stocks.” Belavina’s analysis finds that despite this, and despite generally increased retail waste, higher store density does generally reduce food waste.

US cities' optimal levels of food waste
Hover over each city below to see the number of stores that would maximize the effectiveness of food consumption, as well as the point at which more stores would no longer reduce food waste. Note: bubble size corresponds to population density.

She considers cities including Chicago, Denver, Los Angeles, the borough of Manhattan, and Ithaca, New York. In Chicago, having just three to four more stores per every 10 square kilometers would lead to 6–9 percent less food waste. “Recall that the carbon footprint of food waste is comparable to that of all road transportation,” she writes, “thus these gains are very substantial.” The effects were less pronounced for Manhattan, where the stores are already closer together.

But more density reduces waste only up until a point. When stores reach a threshold density, there’s more food waste. None of the cities she looked at have yet reached that point, although Manhattan is closest. The optimal density of stores there would be 495 stores per 10 square kilometers, she calculates, whereas the actual density is 458. “Adding significantly more stores here might even lead to an increase in waste.”