Government oversight can enhance the credibility of a company’s financial statements.

Government oversight and regulation is routinely disparaged in boardrooms, but critics may want to reconsider their stance. New evidence suggests that investors trust a company’s accounting figures more if a governmental agency is watching auditors—and that trust may carry significant capital-market benefits for the company.

In the United States, accounting at publicly traded firms is subject to inspection by the Public Company Accounting Oversight Board (PCAOB), created as part of the Sarbanes-Oxley Act of 2002, which Congress enacted in the aftermath of accounting scandals such as those at Enron and WorldCom. Chicago Booth PhD candidate Brandon Gipper, with Booth’s Christian Leuz (who is also an economic advisor to the PCAOB) and Mark G. Maffett, investigated how the introduction of public oversight with the PCAOB affected the way investors responded to company earnings announcements. 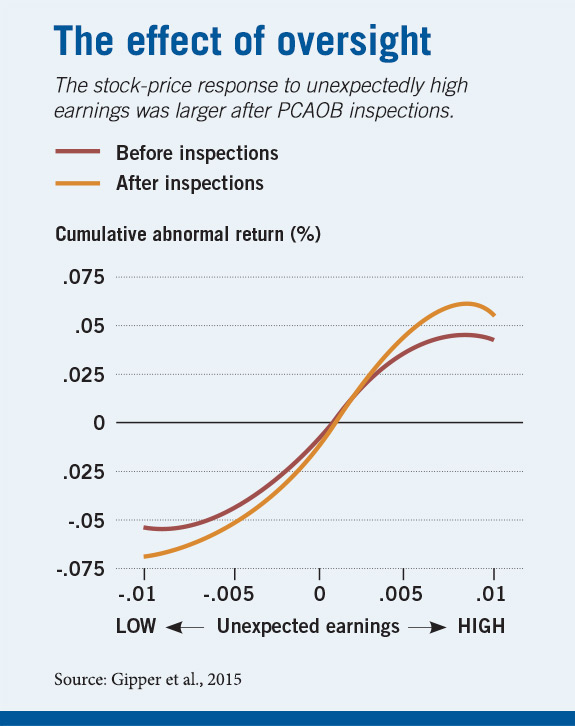 They find that the market reacted to earnings surprises significantly more strongly following the introduction of the PCAOB, a result that suggests government oversight enhances the credibility of a company’s financial statements.

To assess changes in reporting credibility, the researchers studied short-term stock-market reactions to earnings announcements (called earnings-response coefficients or ERCs), using data from 2001 to 2008. The researchers compared a company’s two-year average of ERCs prior to and following PCAOB inspections, while controlling for other factors that could affect investors’ perceptions of credibility. This approach exploited the fact that the PCAOB inspections, which were phased in beginning in 2003, affected auditors and their client firms at different points in time depending on inspection timing, the auditor, and the client’s fiscal year end.

The finding that the PCAOB and its inspections regime have boosted credibility implies a significant, quantifiable benefit for firms themselves. Because the ERC shows how strongly the market capitalizes a firm’s earnings, it can be linked to its cost of capital. Thus, the implication is that the added trustworthiness generated by PCAOB oversight leads to reduction in a company’s cost of capital.

“The results show that strict oversight of audits and reporting credibility are priced in capital markets,” says Leuz. “This means that audits and audit oversight are not just about compliance and costs; there are also benefits. Firms are getting something in return; they’re getting a lower cost of capital.”

Leuz cautions that the study is not a full-blown cost-benefit analysis and does not include consideration of the costs of the new regime. As a result, the study does not show net gains from the introduction of the PCAOB. “Doing such a cost-benefit analysis requires further research,” he says. “But it is an important first step to know that the introduction of public oversight made corporate earnings more credible than under the old peer-review system.”

Business leaders and American politicians alike have taken issue with Sarbanes-Oxley (SOX)—Newt Gingrich and Mitt Romney are among those who’ve called for its repeal—and Leuz acknowledges that the academic literature has been mixed, at best, in its assessment of the law. However, he maintains that the new study provides reason to approach with caution the idea of scrapping SOX in its entirety. “As far as the PCAOB and public audit oversight is concerned, there seem to be some clear benefits, and not only costs. Overall, it is probably too early to say that SOX and its key components were a mistake and should be repealed.”