Private-equity groups are often portrayed by critics as corporate raiders who destroy jobs. But research out of Chicago Booth finds that buyouts accelerate job loss and new job creation—and, in the process, raise productivity and profitability at the acquired firm.

Compensation regulations for bankers' in the UK and EU have helped curb risk, but they've come with some unintended consequences.

The candidates of both major parties agree that something about the US economy is awry.

The debate over leveraged buyouts (acquisitions made using borrowed money, also known as LBOs) is long-standing. LBOs were controversial during the junk bond–fueled 1980s as well as last decade’s easy-credit-buyout boom. Mitt Romney, Republican presidential candidate in 2012, led many such deals as the head of the private-equity firm Bain Capital.

Critics cry “strip-and-flip,” and argue that private-equity shops aim for quick profits by gutting payrolls, raiding balance sheets, and skimping on long-term investments. How could a business strategy that focuses on an early and profitable exit for the private-equity shop serve the future fortunes of the acquired company?

Defenders of buyouts argue that private equity pushes management to fix or cut poorly run operations and to redeploy jobs, workers, capital, and management energy in ways that position the acquired company to thrive.

Professor Steven J. Davis, along with colleagues from the universities of Maryland and Michigan, the Census Bureau, and Harvard Business School, examines the effects of private-equity buyouts on jobs, worker earnings, internal allocation, and productivity.

The authors built and analyzed an exhaustive dataset that spans buyouts from 1980 to 2005, including information on 3,200 target firms before and after acquisition, which they compare to peer companies defined by industry, size, and age. They conclude that “private-equity buyouts catalyze the creative destruction process, as measured by job creation and destruction and by the transfer of production units between firms.”

On balance, employment at target companies falls 3% more than at peer companies in the two years following an LBO, and 6% more over five years. However, that gap is tempered by the fact that target firms also create more new jobs, and buy and sell other companies and business divisions more rapidly. Compared to peers, target firms have an overall net job loss of a modest 1% of employment over two years after a buyout.

Target firms also reduce earnings per worker relative to peer firms, after private-equity buyouts. Thus, the evidence indicates that buyouts improve operating margins by hiking productivity, and by lowering unit labor costs. The resulting gains in profitability have outsize impact on corporate earnings per share, thanks to the leveraged capital structures that characterize firms acquired in private equity-led deals. 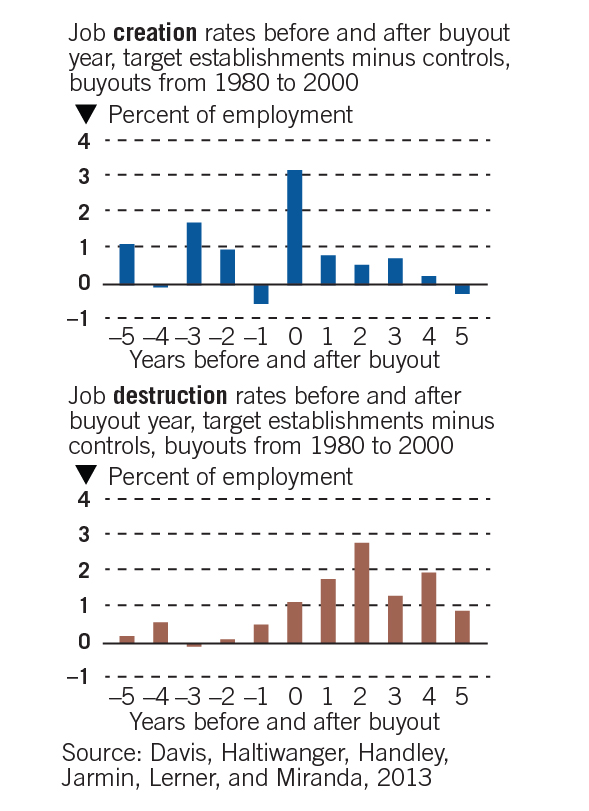