The Phillips Curve Isn’t Dead Yet

The Phillips curve predicts that when the unemployment rate drops, inflation will rise as businesses compete for scarce labor and drive up wages. The late William Phillips, a neo-Keynesian economist with the London School of Economics, first described the concept in 1958, and his idea has helped guide central banks ever since. 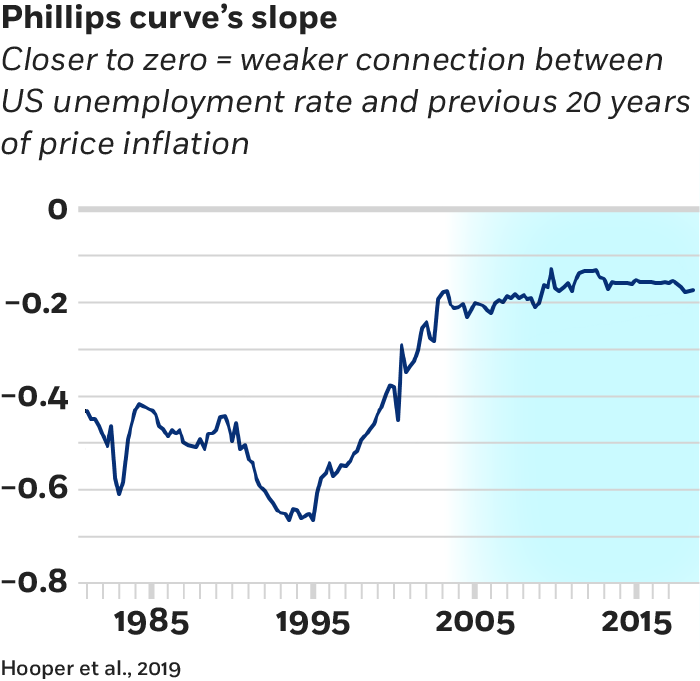 But the United States has experienced falling unemployment since the end of the 2008–09 financial crisis, without much uptick in wages or inflation. In recent years, the unemployment rate has fallen below 4 percent, which is significantly lower than what economists at the Federal Reserve believe is the “natural rate of unemployment.” Still, inflation hasn’t budged, and the explanatory power of the Phillips curve has been called into question. This is true around the globe: “Mysterious Demise of the Phillips Curve Is Weirdest in Australia,” read a recent headline in Bloomberg Businessweek.

Is the relationship between unemployment and inflation good and dead? Research by Deutsche Bank Securities’ Peter Hooper, Columbia’s Frederic S. Mishkin, and Chicago Booth’s Amir Sufi, presented at Chicago Booth's US Monetary Policy Forum, suggests the news of its death may be premature.

The researchers studied US wage and price inflation at the federal and city level, using data reaching as far back as the 1950s. They observe that, at some points in history, the relationship between unemployment and inflation has “unhinged.” During the Korean War, US unemployment was low, but the government artificially tamed price inflation. This seems to have anchored low-inflation expectations within the economy, even when price controls were removed. Although the economy went through booms and busts between 1953 and 1965, “it was as if well-anchored inflation expectations were in the driver’s seat,” Hooper, Mishkin, and Sufi write.

In 1966, the unemployment rate fell below 4 percent, and core inflation began to spike. “This jump was the opening salvo of the great inflation of the 1970s,” they write. Inflation hit 10 percent before Paul Volcker, as chairman of the Federal Reserve, raised interest rates to a peak of 20 percent in 1980. After Volcker’s term, “the Fed focused much more on avoiding labor market overheating in order to stabilize inflation,” the researchers write.

In 1982, inflation fell from around 10 percent to 6 percent. It has not exceeded 6 percent again, and since 2000, it has never been higher than 4 percent. While an observer could interpret this as a failure of the Phillips curve to reveal anything useful about the economy, the researchers suspect that the curve has been a victim of its own success.

Hooper, Mishkin, and Sufi argue that the Phillips curve remains a useful inflation indicator—and wonder if Americans’ low expectations for inflation are again driving rates, as people expect that trends dating back to the mid-1980s will continue.

The researchers advise that the Fed should continue to monitor the Phillips curve, remain hypervigilant about inflation, and resist the often politically expedient temptation to ignore minor inflationary signs on the assumption that inflation can be quickly reduced.

A spike in inflation could, according to the Phillips curve, precipitate a change in expectations after all, reversing the inflation trends that have persisted for decades.

Peter Hooper, Frederic S. Mishkin, and Amir Sufi, “Prospects for Inflation in a High-Pressure Economy: Is the Phillips Curve Dead or Is It Just Hibernating?” Working paper, February 2019.