Is the WTO a Failure or a Success?

At first glance, there does not seem much to celebrate as the World Trade Organization commemorates its 20th anniversary this year. Most obviously, the WTO has so far failed to deliver any significant multilateral trade liberalization, showing only minimal progress toward completing its Doha Development Agenda. Moreover, its role as the leading forum for international trade-policy cooperation is increasingly eroded by the proliferation of regional trade agreements to which governments are turning instead.

What Economists Think about Import Taxes

As voters consider the merits of the Trans-Pacific Partnership (TPP) and Europe awaits Britain’s exit from the European Union, international trade is a fixture in the news and a frequent topic among politicians.

What Economists Think about Import Taxes

Whether governments, or groups of governments, will raise or lower tariffs, ban the import or export of certain goods, or set new standards for carbon emissions makes industries, companies, and individuals worry about the cost and availability of goods now and in the future.

Brexit Has Upside Potential for Both the UK and the EU

The referendum may be the UK's chance for progrowth reform, and the EU's opportunity to address critical problems.

Brexit Has Upside Potential for Both the UK and the EU

However, concluding that the WTO is a failure would clearly be premature. After all, its success depends not only on how well it promotes trade talks, but on how well it prevents trade wars. And its track record seems much better in the latter regard. Most notably, trade-policy cooperation did not break down in the wake of the 2007–10 financial crisis, even though this was a real concern given the precedent of the 1930s. There was nothing resembling the Smoot-Hawley Tariff Act, and the world trading system emerged from the crisis largely intact.

A casual look at the data already suggests that the WTO’s success at preventing trade wars will likely far outweigh its failure to promote trade talks. While the average tariff applied during the trade war of the 1930s was about 50 percent, the average tariff applied by WTO members today is only about 9 percent. Add to this the result that even ideal trade negotiations would not eliminate all tariffs, since governments are subject to lobbying pressures, and it becomes clear that global trade-policy cooperation has already come quite far. 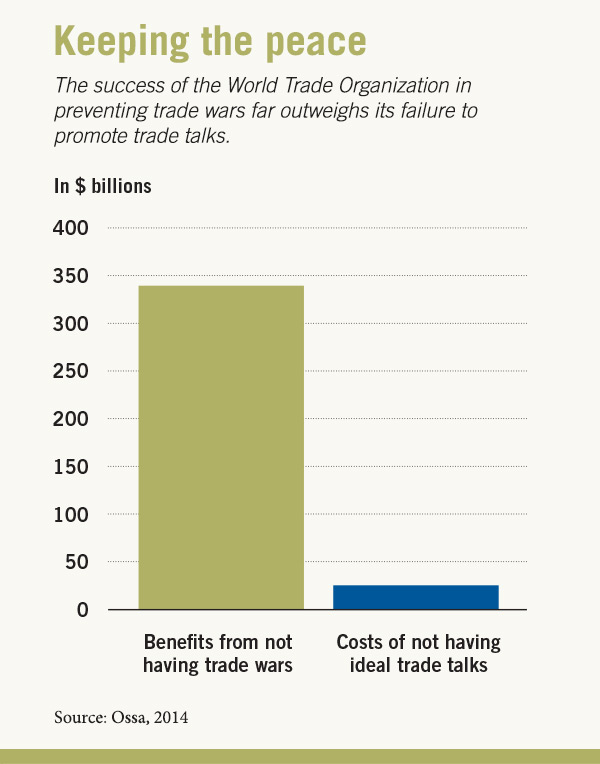 Modeling the best and worst possibilities for trade

In recent research, I move beyond casual observations and provide a more rigorous analysis of the successes and failures of global trade-policy cooperation. In particular, I develop a framework to simulate fully efficient trade talks and fully escalated trade wars and use it to study the effects of moving from applied tariffs to these best-case and worst-case scenarios. My application focuses on the six major players in recent trade negotiations (Brazil, China, the European Union, India, Japan, and the United States) and a residual “Rest of the World.” It uses data on 33 industries spanning the agricultural and manufacturing sectors for the year 2007, the most recent year available in the Global Trade Analysis Project’s GTAP 8 Data Base.

In my preferred model construction, I estimate the possible real income gains from perfectly efficient trade talks to average 0.3 percent and the possible real income losses from fully escalated trade wars to average -3.2 percent, both expressed relative to the real-world conditions present in 2007. Converted into monetary values using manufacturing and agricultural value added in 2007, the estimates imply that the failure of the WTO to promote trade talks costs up to $26 billion per year, and the success of the WTO at preventing trade wars is worth up to $340 billion per year. To put these numbers (which refer to 2005 US dollars) in context, a move to autarky would cost the world $1.461 trillion per year, according to my analysis, so a trade war would eliminate about 23 percent of the gains from trade.

These numbers are best interpreted as rough estimates of orders of magnitude, which have to be taken with a large grain of salt—they are obtained from a theoretical model that doesn’t account for some features of the global economy.

That said, this model has a number of attractive features that make its predictions the best guesses available from the academic literature to date. For one thing, it takes a unified view of trade policy: it features inter-industry trade based on comparative advantage, intra-industry trade based on product differentiation, and governments that are subject to pressures from industry interest groups. It can also be easily quantified using only observed trade flows and tariffs as well as trade-elasticity estimates, which measure how trade flows respond to changes in trade costs. And finally, it predicts noncooperative outcomes that are broadly consistent with historical experience, with predicted trade-war tariffs averaging 63 percent—roughly in line with the trade-war tariffs of the 1930s, which are usually reported to be about 50 percent.

Formal analysis confirms what casual observation suggests: the WTO’s success at preventing trade wars far outweighs its failure to promote trade talks. Though this should not be taken as a reason to delay institutional reform, it also should not be forgotten when assessing the overall performance of the WTO.

Ralph Ossa is associate professor of economics and FMC Scholar at Chicago Booth. A version of this article was originally published on Voxeu.org under the title “WTO success: No trade agreement but no trade war.”