The US Federal Reserve’s attempts to boost economic growth through market intervention in recent years have prompted heated debate among economists and lawmakers. How should we measure the efficacy of such monetary policy? Did a $3 trillion bond-buying program and explicit forward guidance actually reduce unemployment? Do those programs cause inflation? And how will businesses and consumers react when the Fed ends quantitative easing?

A Way to Trade on the Fed

A Way to Trade on the Fed

Even as we create conditions for sustainable growth, we need new rules of the game, enforced impartially by multilateral organizations, to ensure that countries adhere to international responsibilities.

Some Financial Institutions May Be ‘Too Big to Save First’

When bailouts are being considered, a better sequence of events could involve saving the relatively smaller institutions first.

Some Financial Institutions May Be ‘Too Big to Save First’

Jing Cynthia Wu, assistant professor of econometrics and statistics at Chicago Booth, and University of California San Diego graduate student Fan Dora Xia, have what they believe could be adopted as a new standard measure for monetary policy on which all sides can agree, regardless of their opinions on the current round of Fed interventions.

Wu and Xia propose using what some have termed a “shadow” federal funds rate to measure US monetary policy fluidly over time, from 1960 to the Great Recession, and into the future. By integrating decades of historic data with numbers from the Great Recession, the researchers offer a more holistic look at how the Fed’s unconventional monetary policies since 2009 have affected unemployment and other macroeconomic measures.

A break from the past

The zero lower bound has posed a challenge for the central bank, as it has limited its ability to stimulate the economy—the Fed can lower the federal funds rate no further than it already has because nominal rates can never be in negative territory. Unable to move the short end of the yield curve, the Fed has taken unconventional measures, such as its famed quantitative-easing bond-buying programs, to increase the money supply.

And the situation has also dogged economic research. That the federal funds rate is not moving effectively nullified researchers’ time-honored ways of measuring the economic impact of changes in monetary policy. The most popular studies relied heavily on the federal funds rate as a market-sensitive number. Those models became useless with rates artificially stuck at the zero lower bound, where the rate has no meaningful variation even as economic conditions change.

Researchers have devised various ways to measure monetary-policy activity postrecession. Rather than use the federal funds rate in their models, some researchers instead used the maturity structure of Treasury debt. However, it’s difficult to reconcile these measures of supplies of Treasury securities with the federal funds rate people use for the pre-zero-lower-bound period. That leaves no more than five years’ worth of data, too few for meaningful inference. 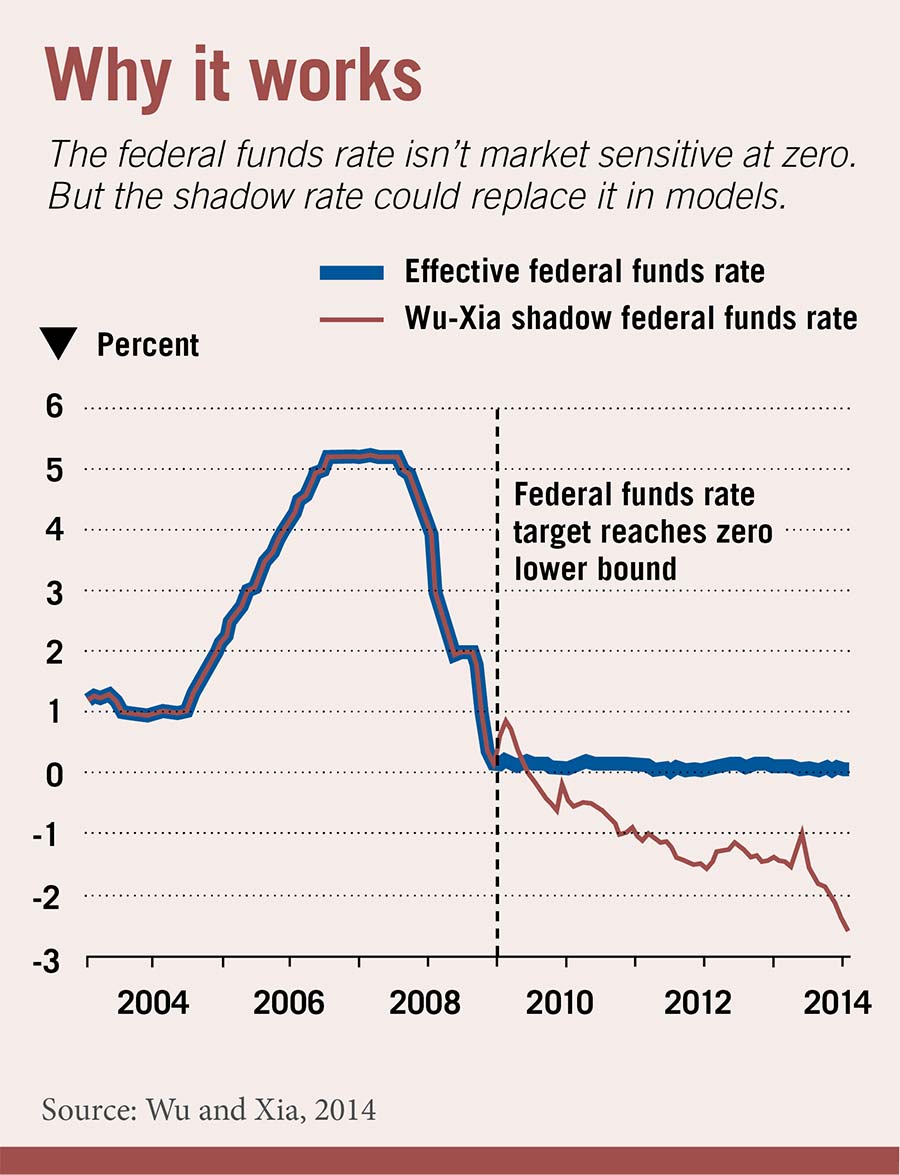 Use the shadow rate instead

But Wu and Xia suggest there’s a way to avoid tossing out a half-century’s worth of macroeconomic data: they advocate using a shadow rate.

They suggest viewing the interaction between monetary policy and macroeconomic variables in the past, current, and future as a continuum, using a hybrid of the federal funds rate and this shadow rate. Their work suggests that by substituting the shadow rate for the preferred federal funds rate only during zero-bound years, researchers can rely once again on popular monetary economic models.

The shadow rate as a finance concept can be credited to the late economist Fischer Black, who spent time as a Chicago Booth faculty member alongside the coauthor of their famous Black-Scholes equation, Nobel Laureate Myron Scholes. While terminally ill with cancer, Black submitted a paper in 1995 to the Journal of Finance that took a creative approach to dealing with interest rates at the zero lower bound. Short-term interest rates can’t technically be negative, but what if there were a hypothetical, shadow short-term rate that could move into negative territory?

Using a shadow-rate model to describe the yield curve didn’t catch on, in part because it typically required arduous, complicated simulations. It remained out of favor for years, until very recently, when researchers looked for a way to model the yield curve in a zero-lower-bound era. A handful of researchers produced their own variations on Black’s original shadow rate, but many believed these shadow rates were of limited use and perhaps unreliable. Wu and Xia aren’t so quick to dismiss their shadow rate, another variation on Black’s original idea. They believe that their shadow rate can be used to summarize the impact of Fed actions including quantitative easing.

More importantly, according to Wu and Xia, the shadow rate correlates with macroeconomic variables at the zero lower bound in much the same way as the federal funds rate does during normal economic times. They demonstrate these correlations in two exercises. In one, called a structural break test, they substitute their shadow rate for the federal funds rate in some macroeconomic models for the zero-lower-bound period, and find the model behaves similarly before and during the zero-lower-bound period.

In another exercise, they plot how macroeconomic variables, such as industrial production, consumer prices, unemployment, and housing starts, dynamically respond to monetary-policy shocks before and during the zero-lower-bound period.

The results affirmed their views that the shadow rate moves in the zero lower bound the way the federal funds rate would if negative rates were possible.

Quantifying the effects of QE and forward guidance

With a wealth of historical data again rendered applicable, Wu and Xia used their shadow rate to quantify the effects of the Fed’s recent and unconventional monetary policies such as quantitative easing and forward guidance.

To do so, they ran two counterfactual analyses. In the first, they sought to estimate what would have happened had the Fed, at the zero lower bound, used the shadow rate to follow historical monetary policy according to a variation on the Taylor Rule. The Taylor Rule, named for Stanford economist John B. Taylor, calls for central banks to change short-term rates (the federal funds rate in the United States) in response to economic conditions.

In a second analysis, the researchers sought to estimate what would have happened to the US economy had the Fed refused to provide stimulus once those actual short-term rates hit zero. They find the economy would have suffered even more. A shadow rate stuck at 0.25% (essentially zero) would have created an unemployment rate a full 1% higher than observed, according to research.

Just like the federal funds rate demonstrates the stance of monetary policy, the shadow rate demonstrates the stance of unconventional monetary policy, Wu says. On May 22, 2013, then–Federal Reserve Chairman Ben Bernanke told Congress that the Fed was discussing slowly tapering its asset-buying program. According to the researchers’ calculation, the shadow rate initially spiked, then fell back as Bernanke further explained that the taper would not signal monetary tightening. Further decline in the shadow rate suggests that Bernanke’s message had an effect on interest rates, which could have a broad effect on the overall economy.

Using shadow rates in the US and abroad

The research suggests that the Fed’s bond buying and forward guidance did, in fact, expand the US economy. Economists at the Federal Reserve Bank of Atlanta have applied the Wu-Xia approach, using their own preferred economic models. They substituted the Wu-Xia shadow rate for the federal funds rate to measure monetary-policy effects on variables such as real GDP growth, core PCE inflation, and unemployment, starting in the first quarter of 2009. The exercise generally produced results consistent with the Fed economists’ own expectations.

In the case of the federal-funds-rate forecast, the Atlanta Fed economists noted that the Wu-Xia shadow rate created a “more believable” result than the standard model with the federal funds rate had, calling for a zero interest rate until late 2015 instead of an immediate exit from zero lower bound. Unlike results from the standard models, that forecast was in line with the Federal Open Market Committee’s (FOMC) own at the time, as well as with the Philadelphia Fed’s Survey of Professional Forecasters and the New York Fed’s Survey of Primary Dealers. The FOMC recently updated its guidance, and many economists now expect rates to begin rising in spring of 2015. Now the Atlanta Fed’s Center for Quantitative Economic Research hosts data from the Wu-Xia model on its website, and updates that data monthly.

The Wu-Xia shadow rate may also prove useful for measuring the effectiveness of monetary-policy efforts by other central banks. While the researchers focus their research on the US, Wu provides a helpful start for research on the United Kingdom and the European Union, with downloadable datasets of shadow rates for both regions, along with US shadow rates, at her website.