While the Federal Reserve has strict rules to guard sensitive information pertinent to its monetary-policy decisions, a growing body of research suggests that information does get out, potentially offering an advantage to insiders looking to get a jump on the market. Exploring how these private lines of communication might work, Chicago Booth PhD candidate David Andrew Finer mines an interesting, unlikely data set: information on taxi rides in New York that suggests an increase in face-to-face meetings between insiders from the New York Fed and Manhattan’s financial sector.

Scrutinizing data from more than 500 million taxi rides over 2009 to 2014, Finer homes in on activity on the days surrounding Federal Open Market Committee meetings, where officials hold discussions behind closed doors and then make carefully worded policy announcements.

The data show an uptick in taxi rides going from commercial banks to the Fed, most notably between 1 and 3 a.m. on the night a communications blackout surrounding an FOMC meeting was lifted. Also significant was the increase in taxis leaving both the Fed and a bank and then converging at the same location around lunchtime—between 11 a.m. and 2 p.m. on multiple days around FOMC announcements. These inferred meetings could permit commercial bankers to glean market-sensitive information—purposely or accidentally—despite the communication restrictions the Fed places on its staff. 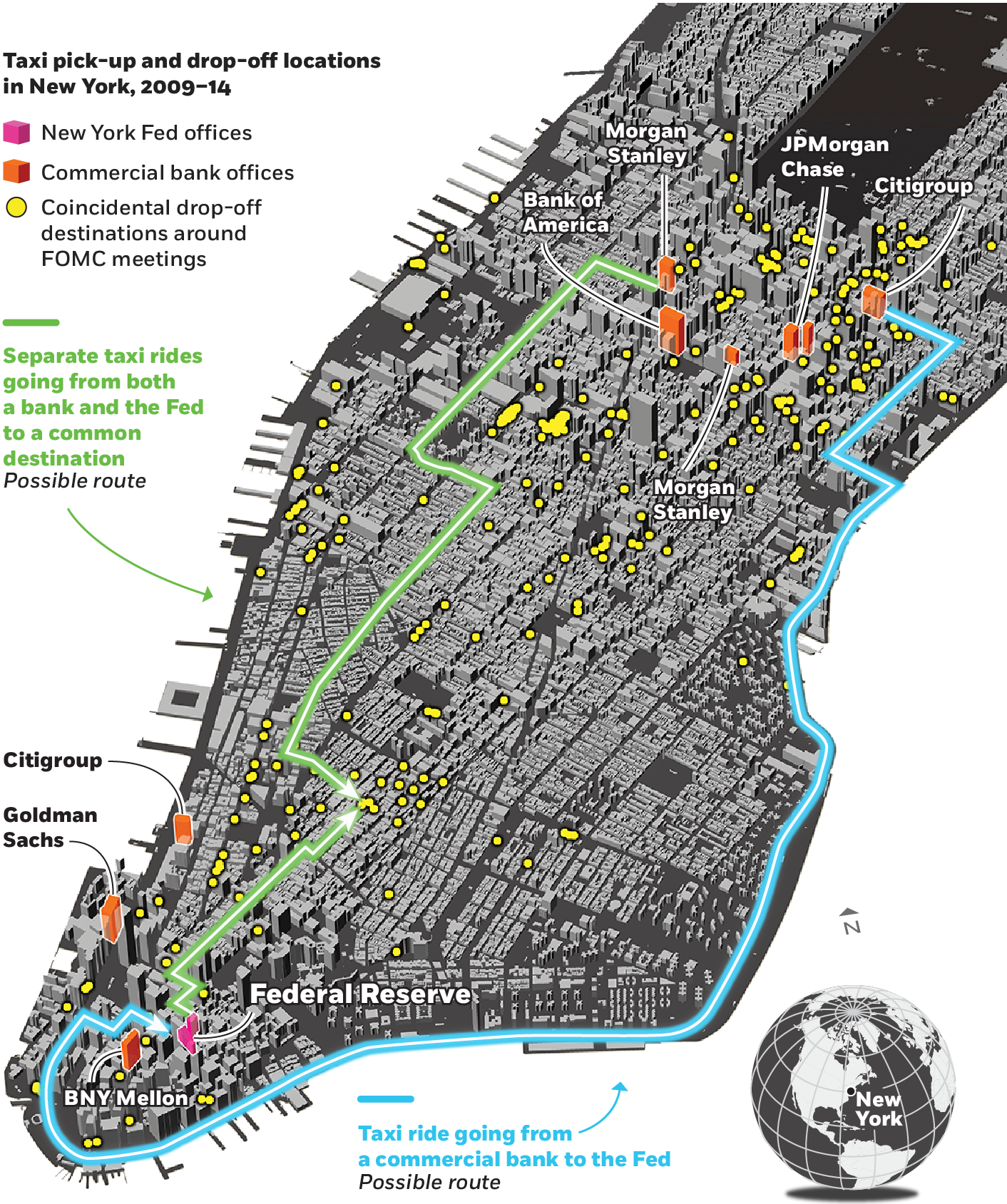 The data at street level: The research notes that these coincidental-drop-off locations suggest potential face-to-face lunch meetings, although a number of the data points likely capture unrelated activities.

Taxi rides going from commercial banks to the Fed 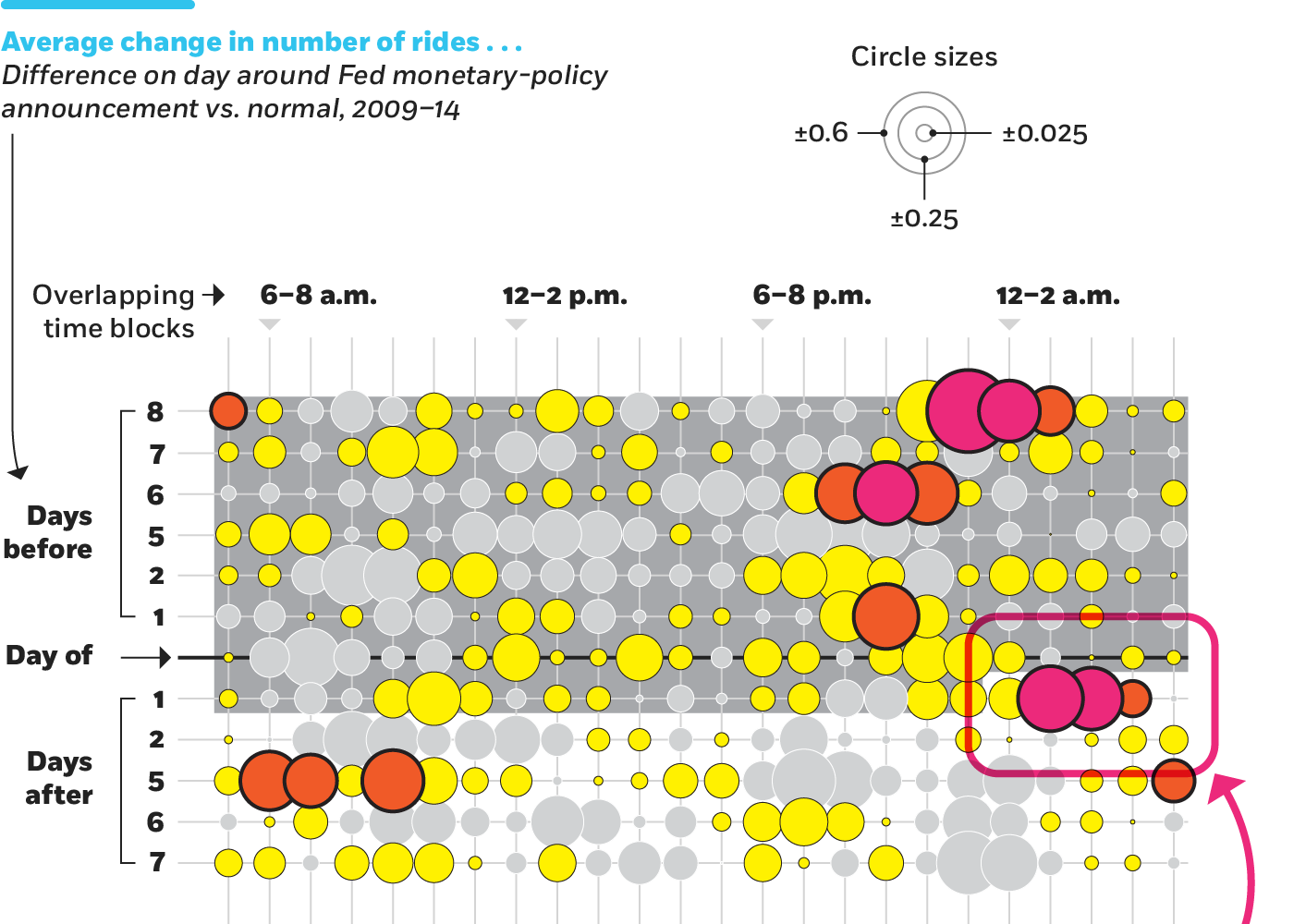 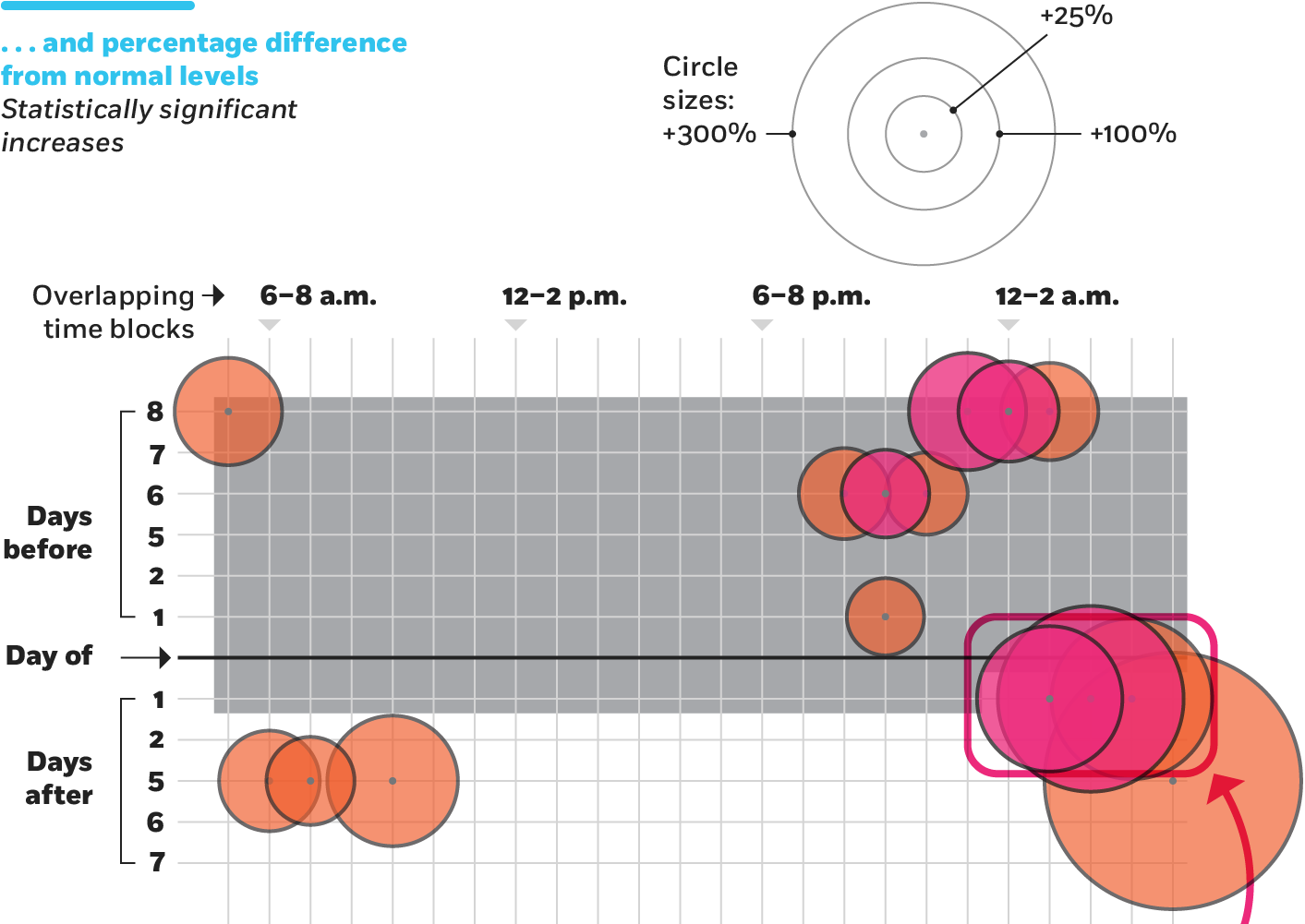 How to read these charts
A surge after the Fed’s communication blackout was lifted: On the night following the day after a Fed policy announcement, there were 0.38 more taxi rides than normal from 1 to 3 a.m. and 0.35 more rides from 2 to 4 a.m., or 94% and 154% greater than normal for those times, respectively. 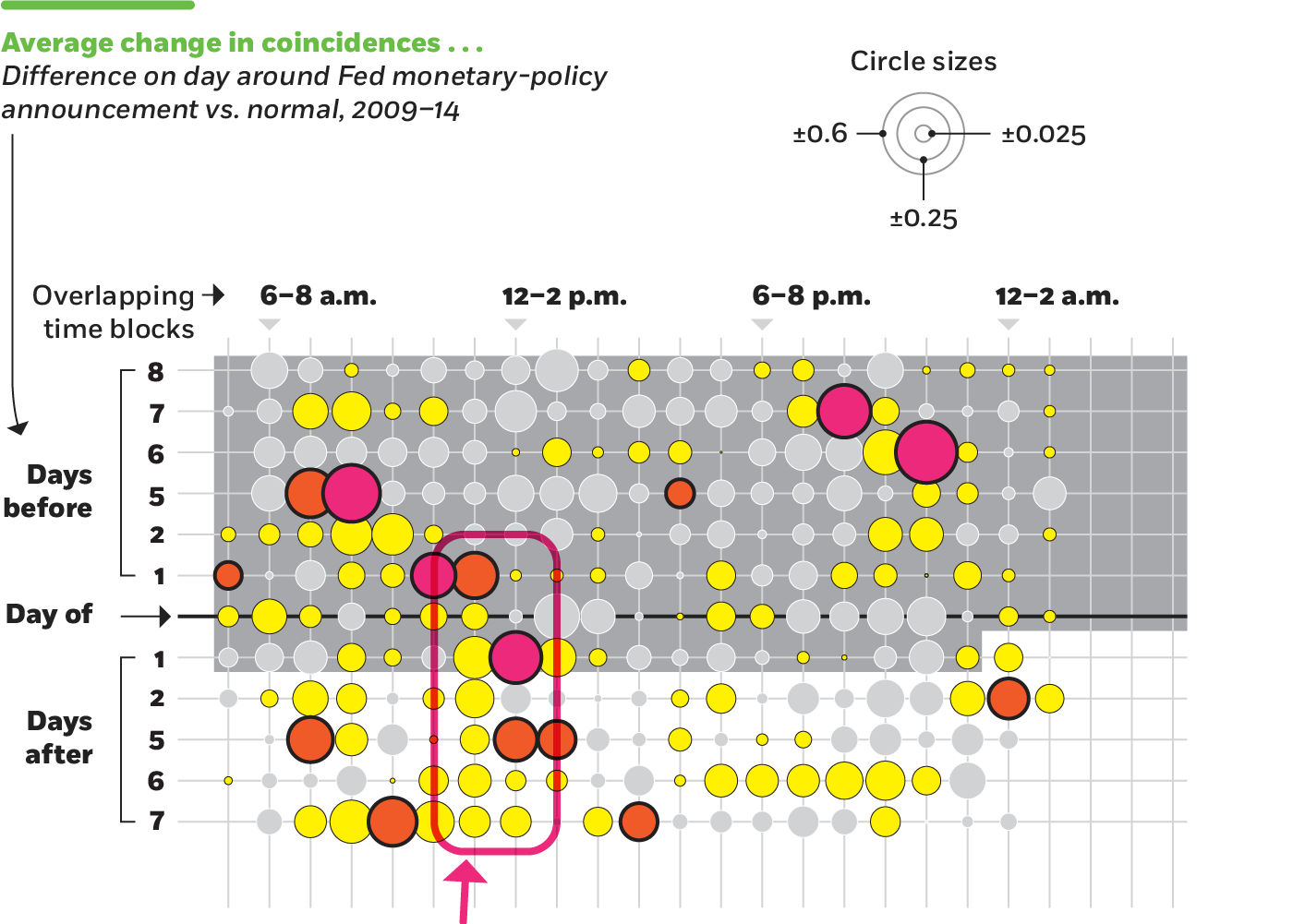 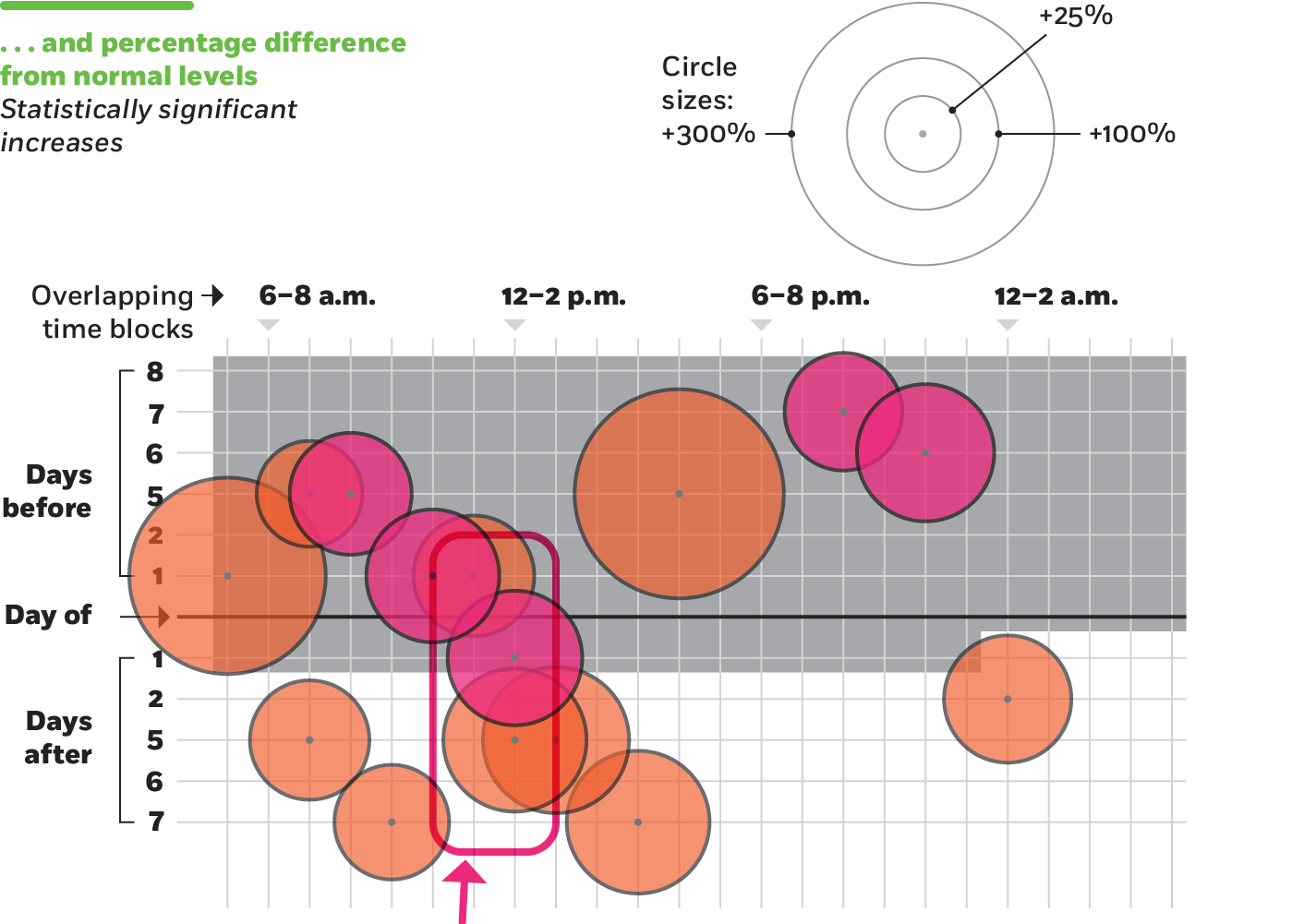 How to read these charts
Another surge at lunchtime: Between 12 and 2 p.m. on the day after an announcement—but still during the communication blackout—there were 0.24 more pairs of rides than normal going from both a bank and the Fed to the same destination, which is 81% greater than normal for that time.

Note: To focus attention on the locations of potential off-site meetings, these calculations omit coincidental drop-offs close to the New York Fed and major commercial banks.