How to Talk Like a Democrat (or a Republican)

What’s the difference between an “undocumented worker” and an “illegal alien”? If this sounds like the setup for a groan-worthy political joke, it is—in a sense. The unfortunate punch line? It depends on whether you’re a Democrat or a Republican.

Democrats and Republicans live in different worlds in the United States—assuming different political attitudes, preferences, and fundamental beliefs—and yes, using different vocabularies. Politicians may have helped exacerbate the tension between political parties by using increasingly polarizing language over the years.

The Art of the Deal Is Not the Art of War

Does Trump’s negotiating technique stand up to scrutiny? His 1987 best seller Trump: The Art of the Deal provides some guidance.

The Art of the Deal Is Not the Art of War

Notable absences from the Republican National Convention may be a sign of a fundamental shift in US politics.

Your Politics Are Showing: When Nudges Work

Behavioral scientists and policymakers turn to nudges when implementing new policies, but some critics argue that such nudges are manipulative, coercing people into choices they aren’t even aware they’re making.

Your Politics Are Showing: When Nudges Work

Measuring polarization and behavioral differences among groups is a perennial challenge for social scientists because of the many random variables to consider. To broach the subject of political polarization, Stanford’s Matthew Gentzkow, Jesse M. Shapiro of Brown University, and Chicago Booth’s Matt Taddy home in on one variable—language. Their research relies on a model-based measure that breaks down and analyzes the differences in rhetorical choices among US political party members, following the trends over a long period of time. 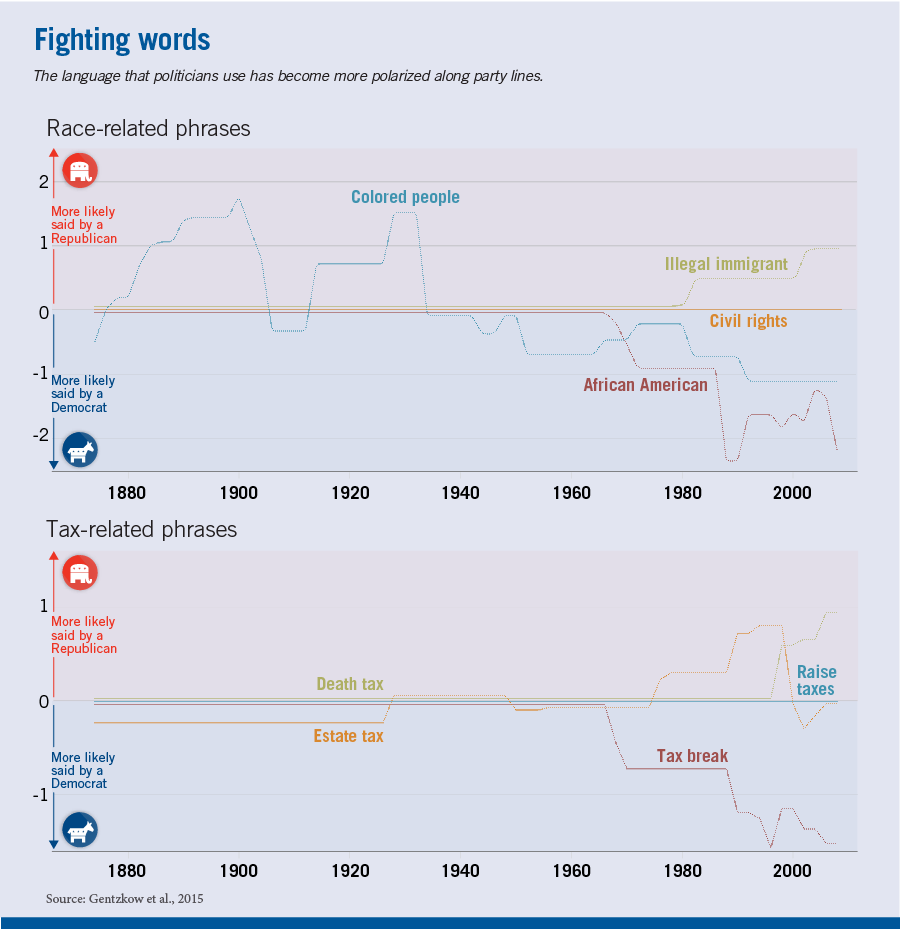 In tackling an extended timeline, the researchers faced yet another challenge: the standard measures of difference and segregation are constantly shifting over time. Gentzkow, Shapiro, and Taddy developed a new approach, focusing specifically on congressional speech and characterizing particular phrases according to their partisanship.

To develop their model, they used an automated script that sorted the text from the United States Congressional Record from the 43rd to the 110th congresses (spanning 1873 to 2009) into individual speeches. They also matched the speaker of each line of text to a particular congressperson using the Database of Congressional Historical Statistics.

Using a “bag of words” approach, which disregards grammar and word order and focuses instead on counting the frequency of “bigrams” or two-word phrases appearing across speeches, the researchers came up with a sample of 723,198 unique phrases spoken a total of 271 million times by 7,285 unique speakers, creating a large volume of data on different speakers’ tendencies to “talk like” a Republican or Democrat.

The findings indicate a distinct shift in language over time. For example, a phrase like “tax break” did not become partisan until the late 20th century, the researchers say. In addition, their research suggests that the language used across party lines has become increasingly polarized, particularly from the 1980s onward.

“These differences may contribute to cross-party animus, and ultimately to gridlock and dysfunction in the political system,” the researchers write.

Gentzkow, Shapiro, and Taddy suggest that looking more closely at the effects of such polarizing language could help us better understand the root cause of problems within our political system.