How the Great Recession Changed US Shopping Habits

Consumers switched away from mid-tier brands and sought bargains at cheaper outlets.

For food retailers, the country’s worst economic downturn since the Great Depression wasn’t so bad.

Research shows that during the Great Recession, US consumers increased their spending on retail food purchases overall, while switching away from mid-tier brands and seeking out bargains at cheaper retailers including warehouse clubs. Chicago Booth’s Pradeep K. Chintagunta and Sanjay K. Dhar, along with William Cha, a data scientist for the shopping app Shopkick who was a Booth PhD candidate when the research was conducted, used consumer-packaged-goods data from 2007 to 2009 in order to understand how consumers changed their buying behavior during the downturn. The research included data from about 60,000 US households. 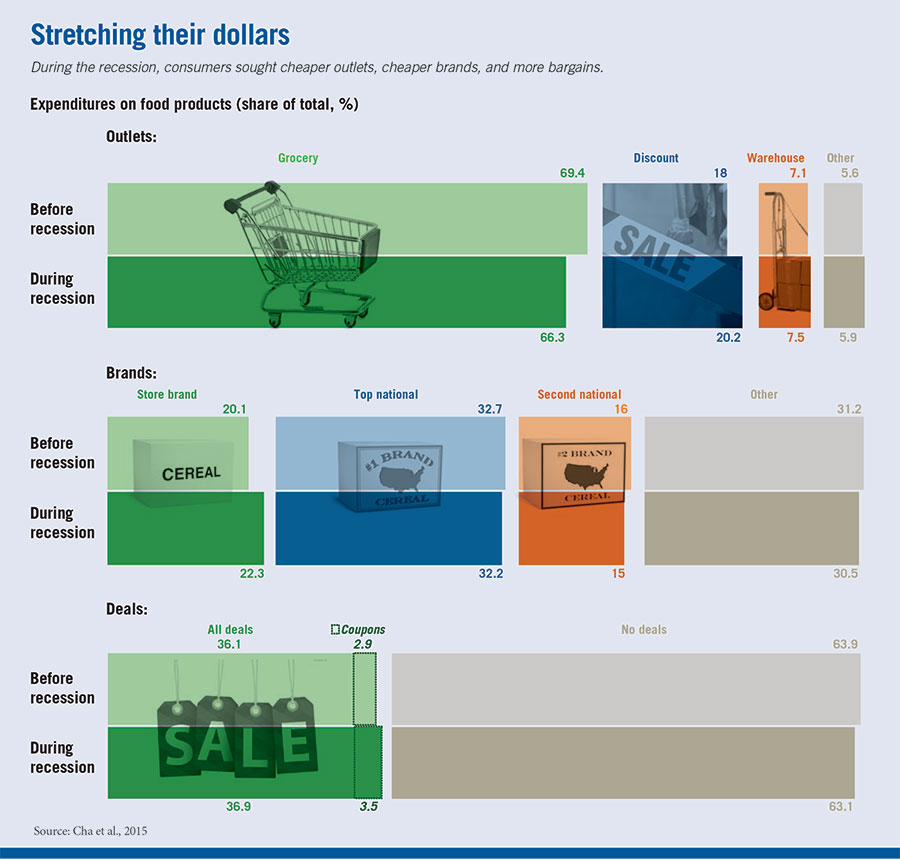 While the $2.1 trillion consumer-packaged-goods industry is generally considered recession proof, the researchers wanted to understand whether consumer spending on packaged food products was even slightly impacted by the deep downturn. They looked at 31 food categories, including cereal, spaghetti sauce, and orange juice, as well as at the prices paid by consumers during the economic downturn.

Despite unemployment across various demographics, it was older, more-educated consumers who made more cuts during the recession than their less-educated, younger counterparts, the researchers find. Even with more disposable income, households in the highest income brackets were also more willing to switch to cheaper brands while shopping at warehouse clubs such as Costco instead of more-traditional grocers. (The finding, according to the researchers, could be used to move from encouraging financial literacy in some demographics to focusing on “household spending literacy” to help rein in unnecessary spending.)

Although consumers proved willing to switch away from some brands, many stayed loyal even as prices increased by nearly 6 percent for top national brands. “Cheap brands are stealing share from the mid-tier brands, while the expensive brands seem insulated from the effects of the recession,” the authors write. Nonetheless, the researchers find that although generic or private-label brand purchases have been steadily increasing over the years, they didn’t grow in relation to the downturn.

Since retail food spending increased as restaurant sales slumped, the increase was likely a reflection of consumers’ efforts to cook more at home during economically turbulent times, the researchers find. Spending on food for at-home consumption rose to $3,526 per household in 2009 from $3,417 in 2007. In contrast, spending on food consumed away from home declined by 11.5 percent from 2006 to 2009, according to the US Department of Agriculture’s Economic Research Service.