An excerpt from Robert Fogel’s book on the great economist

It did not require the invention of national income accounting to demonstrate that the United States was becoming increasingly well-to-do. The expansion of the United States geographically from its original location between the Alleghany mountain range and the Atlantic Ocean to a continental power was obvious. And the growth of the US population from just a few million at the time of the Revolution to more than 100 million people early in the twentieth century was also obvious.

Nor did the numerous technological innovations, which drove the American economy and society forward and transformed American culture, escape notice. Indeed, the commissioner of the 1850 census waxed lyrically as he recounted the technological advances of the previous decade: the vast expansion of the railroad system, the fleet of steamboats that plied our inland waterways, the rapid spread of the telegraph network, and the growth of large-scale plants manufacturing cotton textiles and iron. These technological advances were so remarkable, he concluded, that they could not be matched again in the next decade.

A similar theme was struck by the commissioner of the 1900 census, who reviewed the progress of the preceding half century, which included the laying of the Atlantic cable, electric lights, shortwave radio, automobiles based on internal-combustion engines, the completion of the national railroad network, elevators, typewriters, photographic film, diesel engines, fountain pens, the gramophone, escalators, and motion pictures. He also believed that this collection of advances was so spectacular that it could not be repeated in the twentieth century. 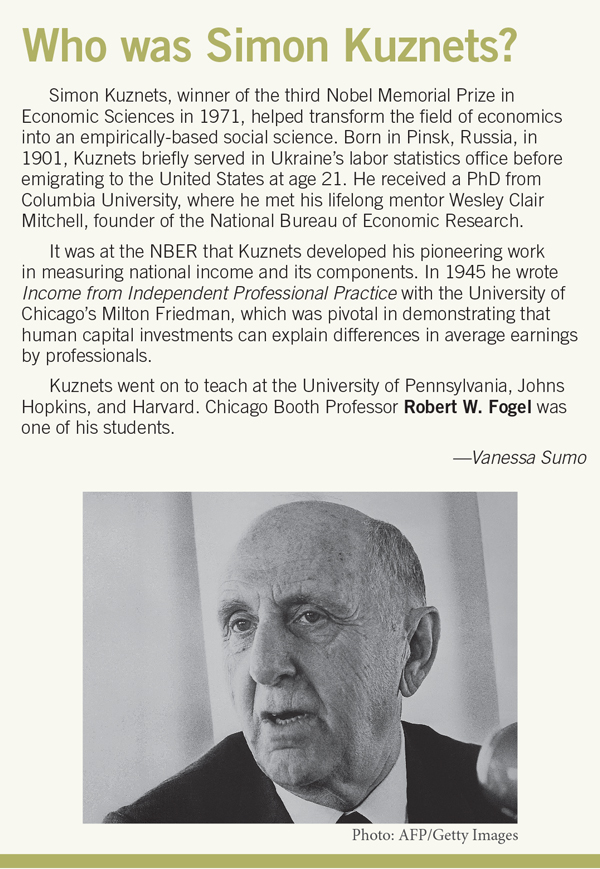 During the decade following World War II, when Simon Kuznets began to lay out his research agenda for studying and explaining the high, long-term rates of economic growth, he was aware of the persistent tendency of keen observers to underestimate the capacity for continuing technological advances. Half a century after the dire forecasts of stagnation, technological advances not only continued but likely had also accelerated. Developments in urban sanitation and food processing and the substitution of automobiles for horse-drawn vehicles had led to dramatic declines in the prevalence of deadly infectious diseases. Vaccines, penicillin, and other powerful medicines were widely available to deal with once-fatal diseases. The country had been largely electrified, and a host of household appliances was available to improve the efficiency of home production (refrigerators, washing machines, vacuum cleaners) and to provide low-cost entertainment (radios, phonographs, televisions).

In the election of 1928, Herbert Hoover had made the extravagant promise that, if he was elected president, there would be a chicken (the most expensive meat at the time) in every pot and an automobile in every garage. Yet, by 1955, advances in animal feeds had turned chicken into the cheapest meat, and there were about as many cars as households.

Nevertheless, in the 1950s, the specter of the Great Depression still haunted economists and policymakers, who worried that the postwar boom would peter out, like air escaping from a balloon, and the country would be returned to the clutches of secular stagnation. That fear was not cast out of professional and public discourse during the 1950s. The topic continued to be vigorously debated into the 1960s and beyond.

As early as 1949, Kuznets was one of a relatively few economists who thought that the Great Depression was the exception and that strong, long-term growth was the rule. What was needed was not another (more optimistic) speculative theory to confront the plethora of pessimistic theories but a careful study of history that might yield an empirically warranted theory.

But how to proceed? How to organize research into long-term trends of economic growth? One issue was the unit of observation. Should it be individual entrepreneurs? Climate zones? Ethnic subgroups? Economic social classes? Religious denominations? Kuznets rejected all these options in favor of the nation-state because the available data were organized and maintained by sovereign states. Moreover, he believed that the political system governing the operation of a particular nation-state might turn out to be an important variable in explaining economic growth.

Kuznets's plan to use national income measures to describe and explain the long-term economic trends of the industrial nations was formulated in the late 1930s. However, the execution of that plan was delayed by US involvement in World War II and Kuznets's duties as the chief statistician at the War Production Board. In September 1943, when it was clear that peak wartime production goals had been attained and planning had turned to the transition back to a peacetime economy, Kuznets wrote to Wesley Mitchell, laying out his research plans for after his return to civilian life.

Mitchell was not enamored of a project that aimed to quantify the similarities and differences in the long-term growth patterns of a score of industrialized nations. He doubted the reliability of the data available for most of these nations and urged Kuznets to continue his prior emphasis on trends in the US economy.

Mitchell's unwillingness to have the bureau sponsor his project, which Burns later rejected out of hand, led Kuznets to seek other auspices. This he found at the Social Science Research Council (SSRC) with funding supplied by the Rockefeller Foundation. Although the shift to the SSRC took place in 1949, Kuznets continued to work at the bureau to complete the projects under his supervision that were still in progress. These included a book presenting estimates of US wealth, national product, and capital formation going back to 1880 and his supervision of a series of monographs dealing with long-term trends in capital formation in various sectors of the US economy. Kuznets's final task for the bureau was a monograph that integrated the various sectoral studies into an integrated overview of the marshaling of capital for economic growth: Capital in the American Economy. With his obligations to the NBER complete, he turned to his project on comparative long-term growth.

Kuznets set out to gather statistics on the growth of nations over a period of at least a half century in order to have secular trends dominate short-term cycles. The data had to be capable of being decomposed in various ways (such as economic sectors and subsectors) in order to study structural changes in the economy during the course of economic growth. The demands of the data meant that his study of growth would be focused on the score or so of nations that had achieved high levels of industrialization by the mid-twentieth century. He characterized the modern industrial system as one in which entrepreneurs applied the empirical findings of science to the solution of problems and the organization of production.

This research agenda guided Kuznets as he produced 10 monographs that were published as supplements to the journal Economic Development and Cultural Change under the general title "Quantitative Aspects of the Economic Growth of Nations." The first of these monographs brought together data on the growth of national product and its components, of populations, and of per capita growth for nineteen nations during the first half of the twentieth century. The text revolved around the discussion of thirty-one very detailed tables. The collection of the data involved efforts of Herculean proportions, and the analysis of the information in the tables was probing and insightful. Kuznets sought to explain the wide variations in the growth rates of per capita income, from a low of 5.6 percent per decade for Spain to a high of 29.2 percent per decade for Sweden (which means that, in half a century, Sweden's per capita income quadrupled while Spain's increased by only 30 percent).

After carefully pointing out various problems and limitations in the assembled data, Kuznets discussed a number of findings that transcended their limitations. One was the deceleration in growth rates after World War I—not only among the losers but also among the winners—which he attributed to institutional destabilizations produced by the war. Another finding was that high rates of population growth did not undermine the growth of per capita income, as some neo-Malthusians believed. Quite the contrary: the available data indicated that high rates of growth in per capita income were positively related to population growth, although the sample size was not large enough to establish statistical significance.

The second monograph in the "Quantitative Methods" series was subtitled "Industrial Distribution of National Product and Labor Force." Here, Kuznets sought to characterize differences in the industrial structure of rich and poor nations in the late 1940s. This portion of the monograph series relied on data collected by the United Nations. Kuznets was able to describe long-term changes in the industrial structure of twenty-eight countries, going back a whole century in two of the countries and between half and three-quarters of a century in most of the others.

This monograph was not the first time that Kuznets had shown the relative importance of intersectoral shifts in total economic growth. But never before had he or any other scholar applied this analysis to so many countries over such a long stretch of time.

Kuznets devoted two subsequent entries in the monograph series to the contribution of capital formation to economic growth. One of his principal findings was that rich countries saved more than poor countries (both in cross section for recent years and over time). Moreover, as countries became rich, saving shifted from being concentrated in households to being concentrated in businesses and governments. Surprisingly, the association between savings rates and the growth rates of nations was highly variable, which led Kuznets to conclude that the intensity of capital utilization was more important than sheer accumulation.

The seventh entry in the series dealt with the share and composition of national product. Kuznets found that, in eleven countries, the household share of consumption was declining while government consumption was on the rise. He also found that, although the share of GDP spent on consumption tended to decline with the rise of per capita income, that decline was limited because changes in technology promoted demand for new goods that satisfied new wants. Consumption was also promoted by the decrease in the inequality of the income distribution.

The last two monographs in the series dealt with the level and structure of foreign trade. From the late nineteenth century to World War I, the foreign trade of most developed countries expanded more rapidly than per capita income. Although this process ground to a halt during the Great Depression of the 1930s, it resumed after the close of World War II. Most of international trade between 1870 and the 1960s was accounted for by Western Europe, the United States, Canada, and Japan either trading among themselves or with underdeveloped countries. Trade purely among underdeveloped countries was minuscule.