How Sarbanes-Oxley Led to Pricier Audits for Everyone

Following a string of US corporate and accounting scandals in the late 1990s, Congress passed legislation to make corporate financial disclosures more accurate and reliable. Named after the sponsors of the bill, the 2002 Sarbanes-Oxley Act (SOX) requires that corporate boards certify the accuracy of their companies’ financial reporting. Certified-public-accounting firms have benefited from more demand for their services.

While SOX forced better oversight for publicly traded companies, its effects on other organizations have been less clear. Research by Chicago Booth PhD candidate Raphael Duguay, Booth’s Michael Minnis, and MIT’s Andrew Sutherland focuses on private companies and nonprofits and finds that the law led to fewer audit services for the former and higher fees for the latter.

Government oversight and regulation is routinely disparaged in boardrooms, but critics may want to reconsider their stance.

The researchers say there’s a common market for auditors, meaning that public companies, private companies, and nonprofits purchase audit services from a shared pool of CPA firms. The firms have limited resources and, in times of demand shocks, reallocate workers to contracts that provide the highest returns.

Privately held companies are not required to purchase a financial-statement audit, but many nonprofits are, and their pricing data are publicly available. These two things enabled the researchers to observe changes in both the quantity of services purchased and the price paid for audits. 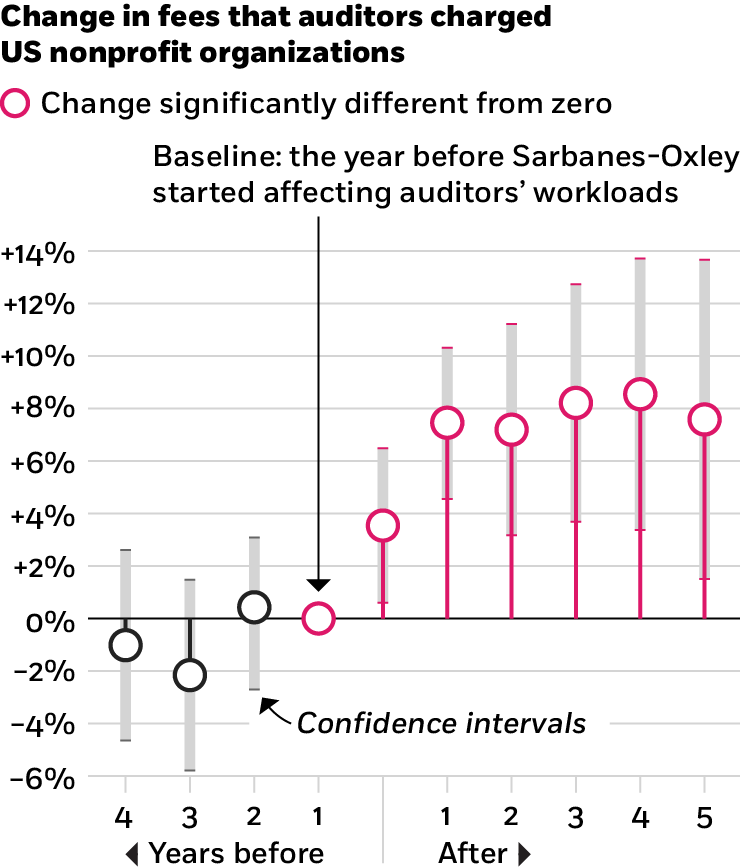 The researchers exploited Section 404 of SOX, which requires a CPA firm to report on the effectiveness of a public company’s internal controls. This regulation effectively increased the demand for accounting services from publicly held companies. The researchers find that privately held companies, in turn, reduced their use of CPA-attested financial reports by 12 percent in just the two years from 2003 to 2005. Instead, they provided their banks with tax returns or internally prepared reports.

Moreover, nonprofits with auditors who became busy complying with Section 404 ended up paying higher audit fees or decided to switch auditors. The research finds fees increased 5 percent, while the probability of switching auditors increased 7 percent. In 2003 and 2009, more than 1,500 nonprofits left the Big Four accounting and audit firms (Deloitte, PricewaterhouseCoopers, EY, and KPMG), a 4 percent decline in market share for nonprofit clients.