How Poverty Brings Costs into Focus

But research suggests that some people do think more clearly in terms of costs and tradeoffs—people with less money or other resources. Meanwhile people who are not worried about a shortage of resources justify their behavior using external factors.

Chicago Booth’s Anuj K. Shah, Harvard’s Sendhil Mullainathan, and Princeton’s Eldar Shafir presented this scenario to study participants: you’re shopping for a tablet computer; would you be willing to travel 30 extra minutes for a $50 discount if the tablet cost $300? What if the tablet cost $1,000?

Low-income individuals were willing to travel for the discount, regardless of the price of the tablet. These individuals based their decision on what they’d be trading off—a week’s worth of groceries or bus fare, for example—by not saving the $50.

Those with high incomes were willing to travel for the $50 discount if the tablet was $300, but less willing when the price rose to $1,000. “Fifty dollars is not a meaningful amount of money for people living relatively comfortably,” says Shah. “What is the $50 coming off of? If it’s coming off $300, that feels like a lot. If it’s coming off $1,000, it feels insignificant.”

The researchers observed similar behavior when looking at dieters. Participants were asked to rate how fattening a large order of McDonald’s fries was when first thinking of a daily intake of calories, then a weekly intake. Participants who were dieting considered the fries equally fattening in both circumstances. For them, eating a large order of fries meant giving up other foods, regardless of how that calorie intake was framed.

The findings relate directly to previous research conducted by the same team, which yielded evidence that constraints force people to focus on the task at hand, at the expense of future, less urgent demands.

Recognizing that scarcity gives people a clearer sense of what something is worth represents another step forward in understanding the psychology of poverty. 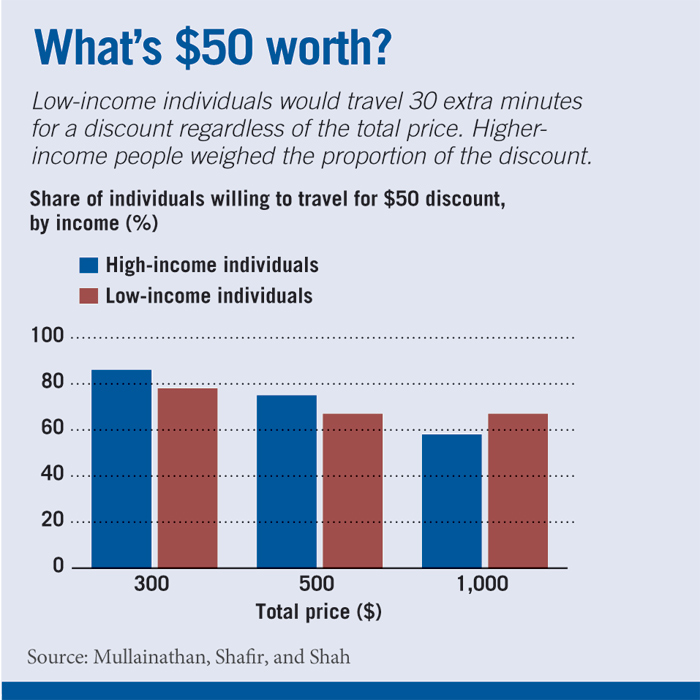