How to Make Money on Fed Announcements with Less Risk

Investors could earn significant short-term gains in US and global stock markets using a simple trading strategy around the US Federal Reserve’s monetary-policy announcements, according to research by University of Notre Dame’s Andreas Neuhierl and Chicago Booth’s Michael Weber. The strategy could achieve a substantially higher return than a standard buy-and-hold investment plan, without increasing risk.

Neuhierl and Weber find gains of about 4.5 percent when investors bought or shorted markets in the roughly 40 days before and after Federal Open Market Committee (FOMC) announcements that ran counter to market expectations. Investors can make money on these “surprises,” even if they did not take positions before the announcements, the findings suggest.

Markets routinely forecast the content of FOMC announcements, which reveal the Fed’s new target interest rates, and usually react when the Fed does not act as expected. An FOMC announcement is an expansionary surprise when its new target rate is lower than the market forecasts and contractionary when it’s higher than expectations.

Share prices continued to drift in the same direction of the preannouncement movement for 15 days, ultimately producing a 4.5 percent difference between share prices after contractionary and expansionary surprise announcements. 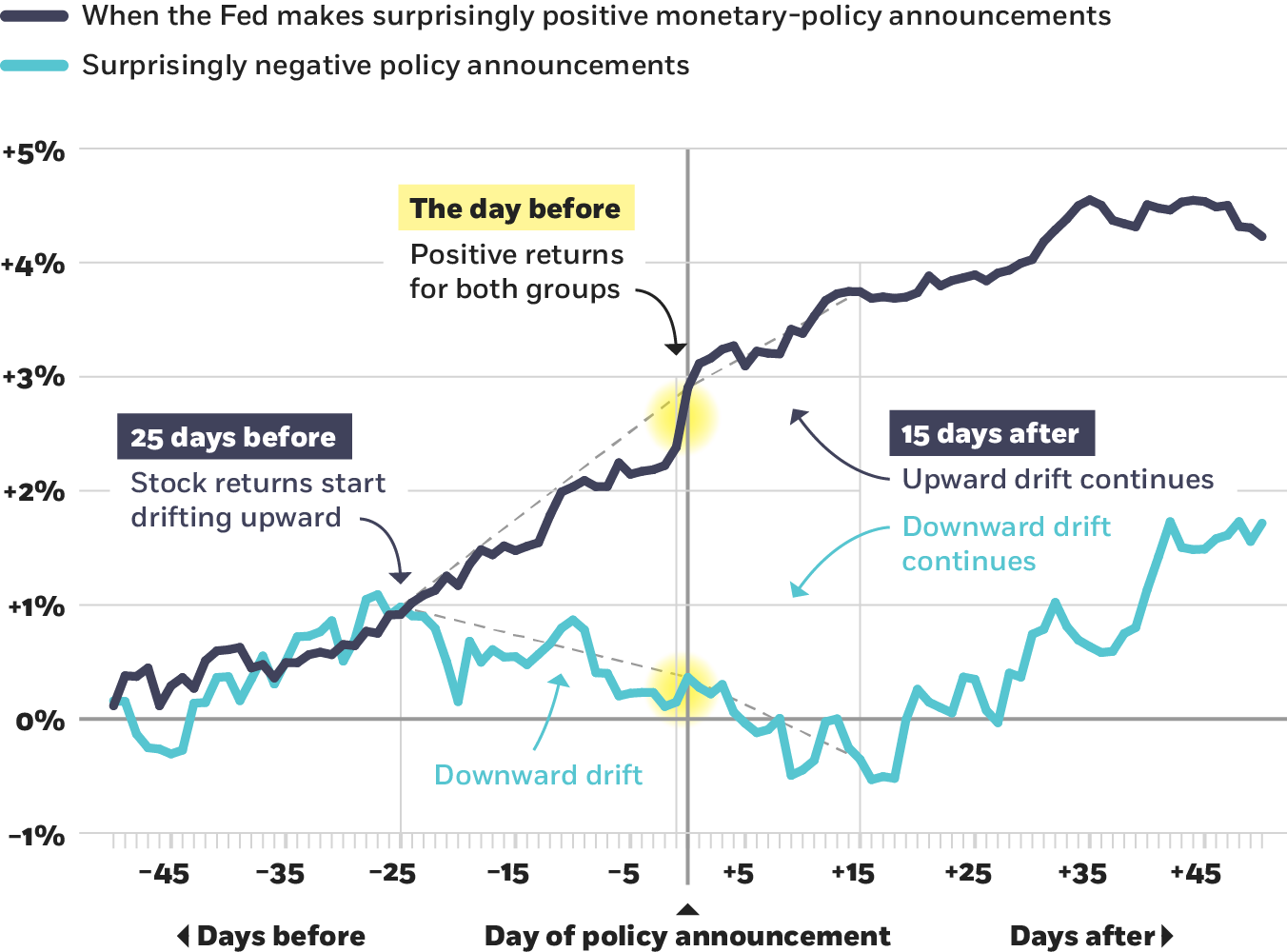 The US policy announcements also affected share prices in foreign markets, according to the research. Share prices in Germany, Canada, France, Spain, Switzerland, and the United Kingdom moved with similar patterns and magnitude around the FOMC surprises.

Even without prior knowledge of the FOMC’s intentions, investors can exploit this drift by buying shares immediately after an expansionary shock and shorting the market when the shock is contractionary, Neuhierl and Weber explain. A strategy that sells those shares 15 days later earns an annualized Sharpe ratio that’s larger by a factor of four than a buy-and-hold strategy. Sharpe ratios measure risk-adjusted returns, with higher numbers indicating less investment risk.

The study followed FOMC announcements starting in 1994, when the Fed first began to communicate its interest-rate intentions openly, then via press releases. The sample period ended in 2009.

The preannouncement movements suggest that some investors know in advance whether an FOMC announcement will meet market expectations.