Do Banks Give Credit Where Credit’s Needed?

During the Great Recession, low interest rates and stimulus programs gave banks in the United States and Europe access to cheaper money. In theory, this lower cost of capital meant that they could extend more credit to people who would, in turn, rev up the economy with spending and investment. But research indicates banks were least inclined to lend to the consumers who were most inclined to borrow, raising questions about the effectiveness of this form of economic stimulus.

Using panel data on 8.5 million credit cards issued between 2008 and 2013, Sumit Agarwal of the National University of Singapore, Souphala Chomsisengphet of the US Office of the Comptroller of the Currency, Chicago Booth’s Neale Mahoney, and Johannes Stroebel of NYU studied how lowering the cost of borrowing affected banks’ propensity to lend to people in different credit-score tiers, as well as how changes in credit limits affected the behavior of people in those tiers.

They find that most of the additional credit offered by banks went to the consumers who needed it least—and for whom it had the smallest impact on spending. Researchers estimate that optimal credit limits for borrowers with FICO credit scores (used to gauge creditworthiness) below 660 increased by only $239 for each percentage point reduction in banks’ cost of funds, compared to a $1,211 increase for borrowers with scores above 740.

Lending to the small spenders
Low interest rates and stimulus programs were supposed to get credit to people who would rev up the economy. But research suggests most of the additional credit went to people who needed it least, and for whom it had the smallest impact on spending. 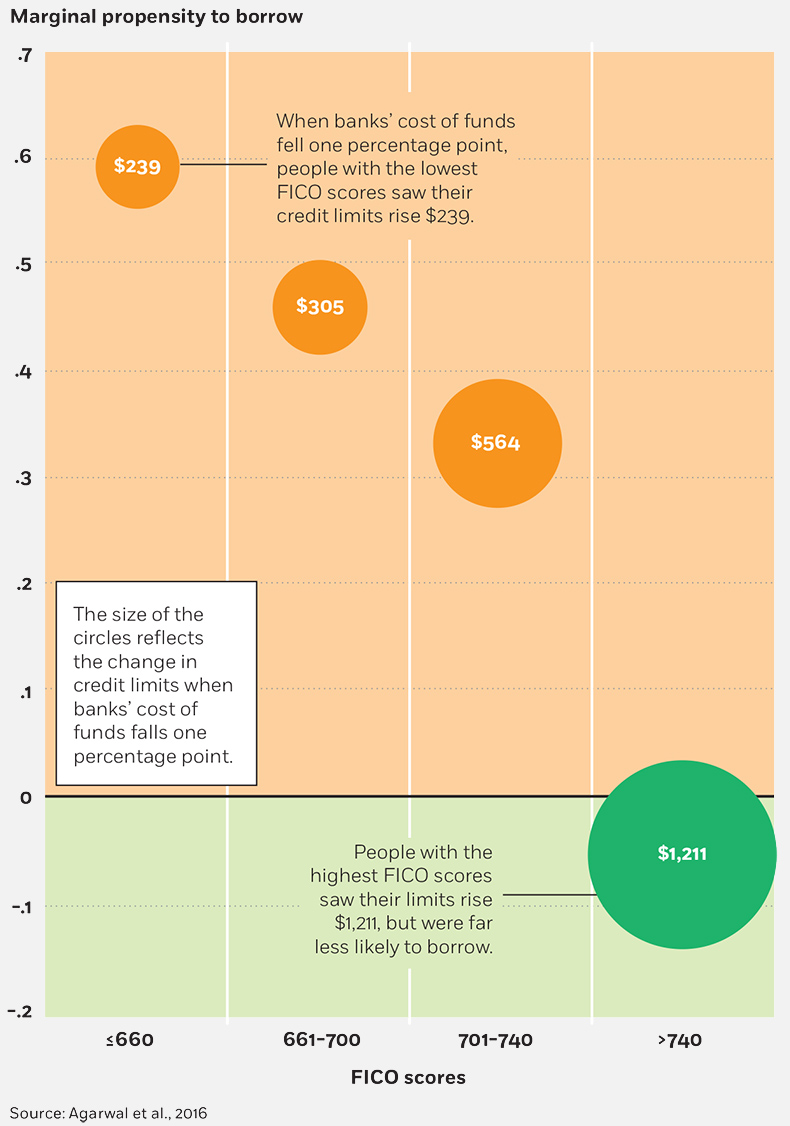 While access to more credit led to higher levels of borrowing across the board, households with lower FICO scores increased their borrowing by a larger margin and retained their debt over a longer period of time. These lower-score borrowers likely used the boost in credit for immediate spending, and then carried the debt forward, paying it down gradually.

Many of those with higher credit scores, on the other hand, took advantage of 0 percent introductory interest offers to buy one-time, big-ticket items, quickly paying down the debt by the time teaser rates expired. The most-creditworthy consumers simply shifted debt around opportunistically between cards without taking on new debt. These consumers weren’t motivated to borrow by the offer of additional credit, since they weren’t credit constrained in the first place.