Shlomo Benartzi and Richard H. Thaler on the importance of payroll-based savings plans.

Many countries are facing a retirement savings crisis. In the United States, for example, the fraction of workers at risk of having inadequate funds to maintain their lifestyle through retirement is estimated to have increased from 31 percent to 53 percent from 1983 to 2010. Roughly half of US employees (78 million) have no access to retirement plans at their workplace. Fortunately, there are solutions to these problems. We simply have to change the choice architecture of retirement plans by utilizing the findings of behavioral economics research and make such plans available to all workers. We describe a large-scale field demonstration of the potential impact of such research-based changes in how we save.

One reason for the savings crisis is the ongoing shift in the private sector from defined benefit pension plans (DB, where retirement benefits are formulaic and known in advance) to defined contribution plans (DC, where benefits depend on investment outcomes). This trend is spreading to the public sector as well and is likely to quicken given the dire underfunding of many state and local pension plans. The United States is not alone in facing these problems. The United Kingdom is launching the National Employment Savings Trust, a national payroll savings plan similar to the New Zealand KiwiSaver program. 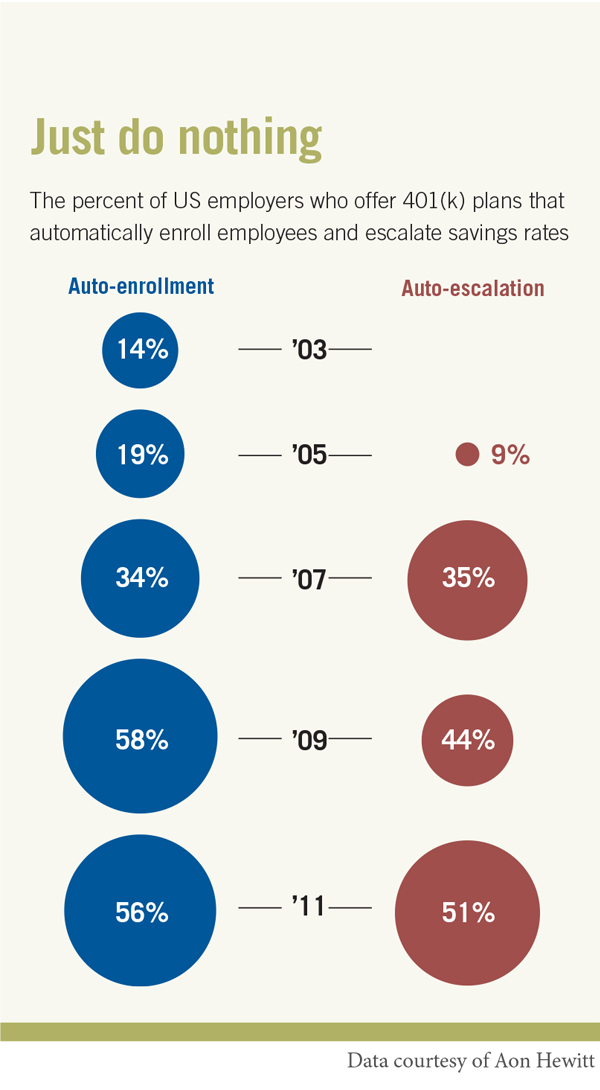 Making a payroll-based savings plan available to everyone is essential because it is the most effective way for the middle class to save. But having a plan offered at the workplace is not sufficient. Even for those with access to an employer-sponsored plan, almost a quarter fail to join, and among those who do join, many save too little.

There are four essential ingredients to any comprehensive plan to facilitate adequate saving for retirement: availability, automatic enrollment, automatic investment, and automatic escalation.

Availability. Every US worker should have easy access to a payroll deduction–based DC plan. The Obama administration has proposed a universal program called the auto-IRA (Individual Retirement Account), which will require employers who do not offer a retirement plan to auto-enroll their employees in an IRA account. Of course, workers can opt out. The state of California has passed a similar plan called the California Secure Choice Retirement Savings Trust.

Automatic enrollment. In traditional DC plans, participants must make an active decision to enroll, including picking a savings rate and an investment portfolio. Many employees intend to join but never get around to it. There is now conclusive evidence that automatic enrollment, where employees are automatically signed up unless they opt out, is extremely successful in overcoming the procrastination that can impede signing up. Opt-out rates average about 10 percent.

Automatic investment. If employees are automatically enrolled, there has to be a default investment option. Fortunately, since the Department of Labor established the criteria for qualified default investment vehicles, both employers and asset managers have worked to create a variety of investment vehicles that provide employees with sensible diversification and an asset allocation mix that is automatically rebalanced when stock prices change (thus, buying stocks in 2009 when the market bottomed), as well as adjusting the portfolio as the employee ages.

Automatic escalation. About three-quarters of automatic enrollment plans use an initial savings rate of just 3 percent of income. Research shows that when offered the default rate many passively accept it but had they been forced to make a choice on their own, some would have selected a higher rate. Automatic enrollment does a good job of getting people started, but employees can be stuck for years saving at an insufficient rate.

We argue that the solution to the problem of saving too little is automatic escalation, a generic term for a plan we devised called Save More Tomorrow (SMT), based on behavioral economics research. The original SMT program has three components. First, employees are invited to commit now to increase their savings rate later, perhaps next January or a few months in the future. Self-control is easier to accept if delayed rather than immediate. Second, planned increases in the savings rate are linked to pay raises. This is meant to diminish the effect of loss aversion—the tendency to weigh losses larger than gains. Because the increase in the savings rate is just a portion of the pay raise, employees do not see their pay fall. Third, once employees sign up for the plan they remain in it until they reach a preset limit or choose to opt out. This uses inertia to keep people in the system.

The ideas are spreading, but has retirement saving actually increased? To address this question, we estimated the effect of automatic escalation, because automatic enrollment can have an ambiguous effect on the average savings rate. We contacted the largest 25 companies that administer retirement plans, which service roughly 90 percent of participants in DC plans according to the 2012 Pensions and Investments directory of retirement plan providers [supplementary materials (SM)]. We asked each plan provider for the following data as of the end of year 2011: the number of plan participants they serve who are currently making contributions to their plan (N); the number of plan participants who are enrolled in a SMT or other automatic escalation program (S).

We received data from 13 of the 25 plan providers, covering 55 percent of plan participants according to the Pensions and Investment directory (SM). Of the 20,628,702 contributing participants in our data, 2,268,726 are enrolled in an automatic escalation program, yielding a utilization rate (S/N) of 11 percent. If this utilization rate is applied to the entire universe of participants, we estimate that there are already about 4.1 million participants who are having their savings rates automatically increased.

We calculated the effect of automatic escalation on retirement plan savings rates, based on the conservative assumption that salary deferral rates are increased automatically by just 1 percentage point per year for only three years. These are the minimum requirements set by the Pension Protection Act of 2006. Some plans go beyond this minimum, either in the rate at which deferrals are increased or in the number of years such increases are continued, so our estimate of the increase in savings is biased downward. Our estimate is also biased downward because we do not include the effect of additional matching contributions by employers, typically 50 percent up to some cap. At the current utilization level of automatic escalation, 11 percent of participants boost their salary deferral rates by 3 percent over three years, which results in an average increase of 0.33 percent for the universe of plan participants (11 percent penetration times 3 percent increase in deferral rate). To put this 0.33 percent effect in perspective, the average deferral rate is 6.2 percent, as reported by the Plan Sponsor Council of America. We interpret this as showing that the intervention is having a noticeable effect, even at the currently low take-up rate by employees. We estimate that automatic escalation boosted annual savings by $7.4 billion, if we assume an average annual compensation of $60,000 and a 3 percent increase in deferral rates.

The next step is to increase program utilization. There are three simple ways to achieve this goal. First, it should be easier for workers to join the plan. Of the employees offered the original version of SMT, 78 percent signed up, in part due to the ease of doing so (employees met with a financial adviser who took all necessary steps to join). Take-up rates in most plans are much lower, in part because employees do not know the option exists or find the sign-up procedure cumbersome. Making the option more salient and making it easier to enroll will likely pay dividends. Alternatively, automatic escalation can be made the default, both for new and existing employees who are stuck at a low savings rate. Of course, in this case, opting out must be easy.

This article is reproduced with some modifications from "Behavioral Economics and the Retirement Savings Crisis" by Benartzi & Thaler, SCIENCE, 339:1152–1153 (2013). Reprinted with permission from AAAS.