To Reach Your Goal, Change Tactics in the Middle

It’s a well-established notion in behavioral science that people have two motivational systems. The first is “promotion”—thinking about the positive aspects of seeking a goal, and the positive actions taken to achieve it. The other is “prevention”—avoiding negative actions that would impede a goal. In most people, one of those motivational systems tends to be stronger, says Bullard. Research by Stanford’s Jennifer L. Aaker and Northwestern’s Angela Y. Lee found in 2001 that North Americans are predominantly promotion focused.

But Bullard and Manchanda uncover some nuance in that trade-off, finding that when people are pursuing a goal, they change their view of the goal and their motivational system, switching from a promotion focus in the earlier stages to prevention later on. The researchers suggest that understanding and harnessing that “motivational switch” could help goal seekers.

In one experiment, Bullard and Manchanda asked people to imagine being at various stages of pursuing a goal, such as losing 15 pounds. Study participants viewed their goal as promotion focused at the beginning and as prevention focused toward the end of their pursuit. The researchers observed the same pattern of results when participants pursued actual goals. Participants in earlier stages focused on positive outcomes and worked toward those. In later stages, they worked to avoid negative outcomes.

What Happened to Your Goals?

The science of motivation can help you finish what you started.

What Happened to Your Goals?

Focus on what you’ve accomplished
Seeking an approach that would bring sushi restaurant customers back sooner, researchers find that initial progress was a factor. 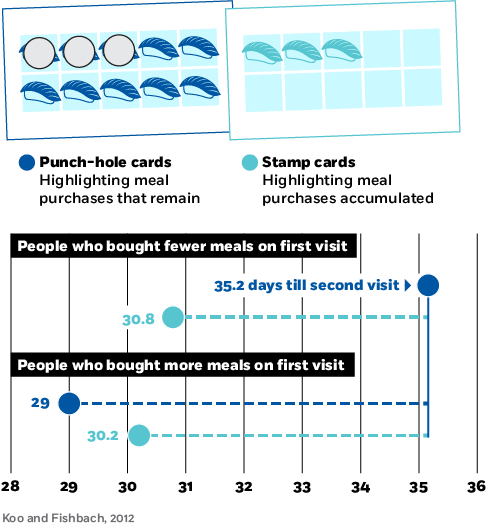 This dichotomy could help explain what Chicago Booth’s Ayelet Fishbach and Minjung Koo, then a Booth PhD student, now at Sungkyunkwan University, find in a study in which they gave people restaurant punch cards that offered a free meal after the purchase of 10 meals. The cards highlighted either how many meals participants had bought or how many they had left to buy in order to reach 10. Fishbach and Koo find that when people were just starting out, they were more motivated by the progress they’d already made. Toward the end, they were more motivated by how many meals they needed to buy to reach the free-meal threshold. Bullard and Manchanda suggest that the motivational switch effect they identify is consistent with and could underlie the punch-card results.

According to Bullard, the fact that North Americans are predominantly promotion focused can explain why they are pretty motivated when they start to pursue a goal. But because North Americans are weaker on prevention, staying motivated may be more challenging. Recognizing that tendency could help people engage a prevention focus halfway through their pursuit, says Bullard—and that could help them stick to and ultimately attain their goals.