Advertisements meant to remind consumers of what they haven’t had recently can backfire if marketers don’t downplay the alternatives.

When was the last time you visited London?” asks an advertisement for Eurostar, showing a yellowed photo of a boy in front of one of the city’s older, famous double-decker buses. The ad, dripping with nostalgia, is designed to lead to train-ticket purchases. This is a popular advertising setup meant to stoke consumer craving. People tend to assume a “deprivation model,” in which a craving for a product increases over time, no matter what. But research by Chicago Booth’s Ayelet Fishbach and Xianchi Dai of the Chinese University of Hong Kong challenges that view.

In one study, the researchers asked college students for their feelings about foods specific to their hometowns. They found that the craving for favorite foods increased over time—unless good substitutes were present, in which case craving decreased.

The researchers then looked at how substitutes might be used to try to change people’s subjective experiences of craving. Twice during the week of Passover, they asked Jewish participants who observed the tradition of abstaining from leavened food how much they missed it. They found that simply mentioning the idea of substitutes (matzah, or unleavened bread) had an effect. In the presence of substitutes, the participants missed the food less over time. In their absence, they missed it more. 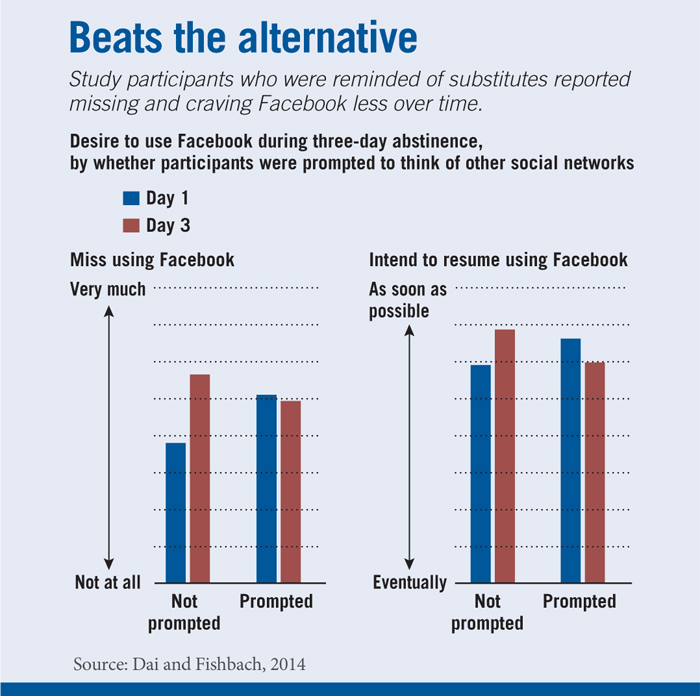 The results hold true when the object of desire is Facebook. Fishbach and Dai had participants abstain from using the social network for three days; and for some of those participants, the researchers asked them to try rivals such as Instagram. Again, those who used substitutes reported missing and craving Facebook less over time, whereas those who weren’t reminded to try alternatives missed it more over time.

“Practically, our findings question the validity of a common practice of prompting consumers to consider the time that has elapsed since they have consumed something. This strategy will backfire in the presence of substitutes,” says Fishbach.

Marketers, she says, should downplay the value of alternatives, while underscoring that the product in question is really the only one that can satisfy a particular need. Emphasizing the absence of good substitutes is probably as important as reminding people what they haven’t had recently.